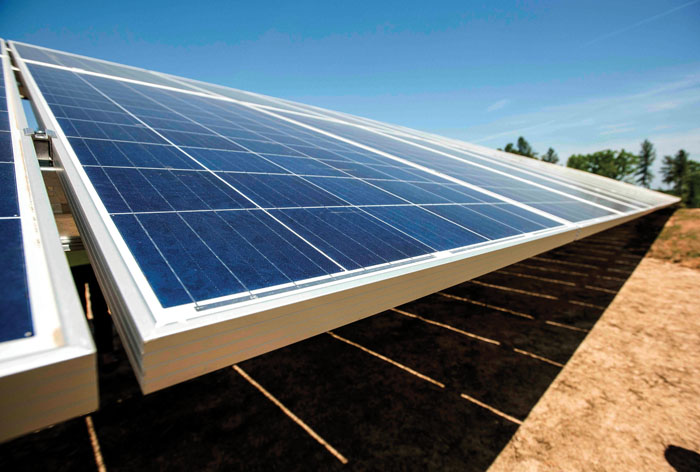 GOLD HILL — A company planning a major solar farm in rural, southeast Rowan County will host a meeting about the potential project today at 6 p.m. at the Russell-Rufty Memorial Shelter at 755 St. Stephens Church Road.

The meeting has been organized by Birdseye Renewable Energy, a Charlotte-based solar energy company that was recently acquired by Virginia-based Dominion Energy. The company has plans to install a solar farm on a 550-acre plot of land near Old Beatty Ford Road and U.S. 52, across the road from the Goldhill Airpark.

Since its launch in 2009, Birdseye has covered nearly 3,000 acres with solar panels and completed 44 utility-scale solar energy projects across North Carolina and the Southeast, according to the company’s website.

Birdseye has indicated plans for the project date back several years. Brian Bednar, the founder and CEO of the company, spoke to the Rowan County Board of Commissioners in March  during a public hearing regarding proposed updates to the county’s solar energy rules. A moratorium had been placed on new applications in fall of 2019 after pushback from Rowan County residents about a large solar project in western Rowan County.

At the time, Bednar encouraged commissioners not to approve any rules outlawing systems larger than 50 acres in certain zoning districts because it would prevent his company from going forward with the Gold Hill project. He said the company had been working on the project for two years.

Commissioners passed the updated rules and recommendations in early April and didn’t set a hard limit on acres allowed. Instead, the new rules state that a “maximum system acreage of 50 acres is preferred, but may be increased based on the site’s ability to meet all other recommendations contained herein.”

“These new rules are going to be put to the test when this thing comes around,” Commissioner Craig Pierce said.

Vivian Hopkins, who lives on land near the 550-acre property for the proposed project, said she received an invitation to the meeting through the mail a little over a week ago. Hopkins was one of about 70 locals who received the letter, said Birdseye Director of Development Landon Abernathy.

“What we’ll typically do is invite all of our buffered and adjacent neighbors and make sure anyone who would be impacted by the project gets an invite,” Abernathy said.

The letter states: “We are excited to be working with your community, and bringing this quiet, passive, low-traffic neighbor to your area.” In the letter, the company also pledges to preserve existing trees and vegetation and to provide “ample distance and visual buffering against your properties.”

Hopkins, vice president of the Historic Gold Hill and Mines Foundation, said she’s already met with other local residents to talk about the proposed solar site. Hopkins said she and others have some concerns, especially about its impact on the environment, the nearby airpark and the community’s tourism industry.

“A solar farm is not what you want to see in an area that is historically designed for tourism,” Hopkins said.

Those concerns are shared by Darius Hedrick, a longtime resident of Gold Hill who owns property in the historic part of the community.

“The solar projects in my opinion, as a preservationist, is contrary to what we’ve tried to do in east Rowan and specifically the village area in trying to rescue Gold Hill from Mother Nature and recognize the historical significance of the area,” Hedrick said. “We just don’t see it’s compatible alongside solar energy projects.”

Abernathy said he hopes the meeting will provide the company with a chance to address concerns and work with locals on the project.

“It’s an opportunity for us to introduce ourselves and let the people in that direct area know what we’re planning and what we have in mind and open up some dialogue,” Abernathy said.

Space for the meeting in the shelter is limited.