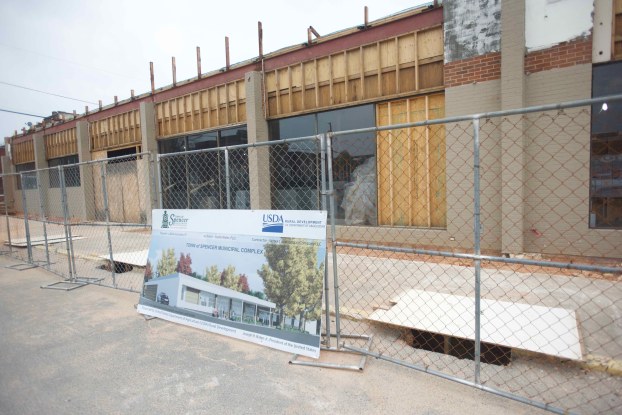 Carl Blankenship/Salisbury Post file photo - Spencer's budget includes $160,000 in new debt service required to be paid to the U.S. Department of Agriculture annually for the next 30 years for the new municipal complex in Park Plaza.

SPENCER — Spencer’s Board of Aldermen adopted a $3.8 million budget for the coming fiscal year and a modernized development ordinance in one fell swoop on Tuesday.

Some small adjustments were made to the budget between the initial recommendations and the adopted version, with increases in some areas and decreases in others.

A $10,000 reduction was made to the town’s Powell Bill fund for road maintenance after a $10 municipal vehicle tax was eliminated and a $9,000 reduction to the police budget removed additional cellphones.

The town’s police department is the most expensive piece of the town’s operation, with $1.24 million in funding, followed by $800,000 allocated for town administration.

The budget also includes the addition of $160,000 in new debt service required to be paid by the town to the U.S. Department of Agriculture annually for the next 30 years for the new municipal complex in Park Plaza.

Town Manager Peter Franzese thanked the board members for their work with administration on the budget, noting this was the first budget he has overseen as a town manager and it was an exciting experience.

The development ordinance overhaul was required according to N.C. General Statutes Chapter 160D. The new chapter outlines modernized development guidelines that apply to both counties and municipalities. The product of months of work on the part of the town was an overhauled zoning map and set of rules to be consistent with legislation.

Town Planner Kyle Harris spoke in positive terms about the ordinance. He noted the town’s flood damage prevention ordinance is administered by the county, and that part of the wording has been aligned so both can continue to administer the program.

Rick Flowe of the Kannapolis planning firm N-Focus spoke to the board briefly about the ordinance as well. The firm worked with the town to overhaul the ordinance. He spoke of two more years of administrative planning support from the firm that begins with the adoption of the new ordinance. Flowe said that support includes any modifications that need to be made due to change passed down by the legislature.

“That was an offer that we made before we saw this legislature get to work,” Flowe said. “Because they might have us working pretty hard.”

Flowe said the firm will also offer technical support to Harris and plans to sit down soon to talk through the best way to use the ordinance.