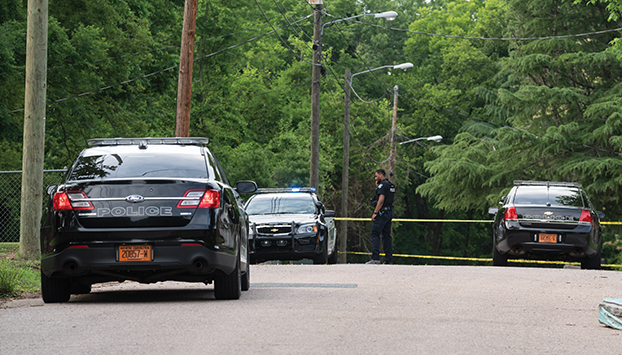 Josh Bergeron / Salisbury Post - A Salisbury Police officer talks on the phone Wednesday as police work a homicide in the 700 block of Grace Street.

SALISBURY — An unidentified man was found dead Wednesday in the 700 block of Grace Street, according to Salisbury Police.

Salisbury Police classified the incident as a homicide, but details were otherwise limited. A news release said officers responded around 6:11 p.m. for a shots fired call. Once there, officers found a Black man with gunshot wounds. He was pronounced dead at the scene.

A news release said no further information could be released. Anyone with information can contact Detective McElveen at 704-638-5333.

Wednesday’s murder is the second this week. On Sunday, a 42-year-old man, Joey Eric Partlow, was shot and killed at Zion Hills Apartments. Police haven’t said whether the two are connected.