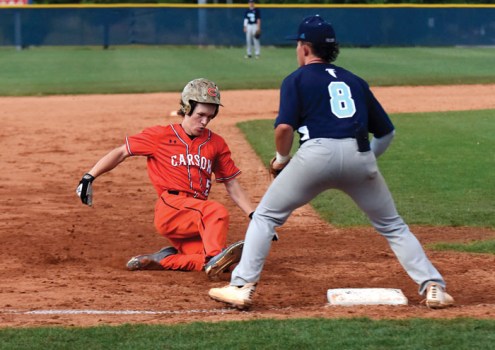 Carson's Dylan Driver 5 slides into 3rd base after hitting a triplle. West' Peyton Summerall 8 covering. photo by Wayne Hinshaw, for the Salisbury Post 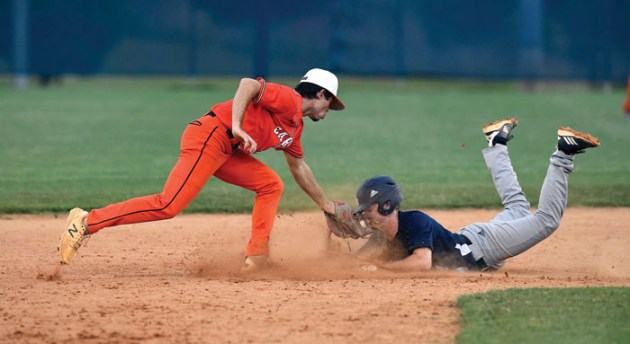 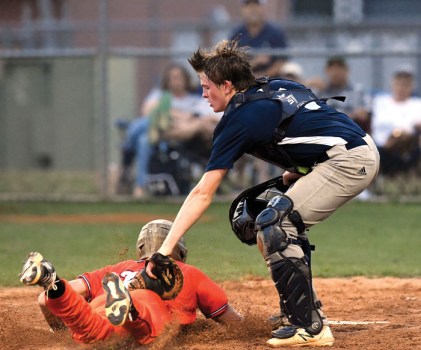 West's Noah Noeblein 4 tags Carson's Cameron Pyle 3 out at the plate trying to score. photo by Wayne Hinshaw, for the Salisbury Post 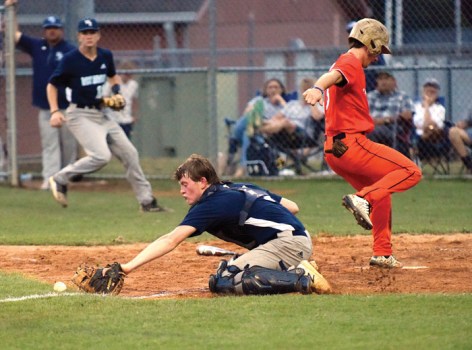 CHINA GROVE — Carson had more to play for in terms of the state playoffs, but pride can be a powerful motivator.

Kicked around by Carson 5-0 exactly a week earlier, West Rowan had the will to beat the Cougars 5-4 in an 11-inning marathon on Tuesday in a semifinal game in the North Piedmont Conference Tournament.

Andrew Kennerly’s opposite-field double was the decisive blow. It made a winner of lefty Casey Gouge, who dominated after he took the mound in the sixth inning.

“We got the fast start we needed tonight and that was the key thing,” winning head coach Seth Graham said. “Carson can jump on you and blow you out early, but tonight we got that quick start.”

East Rowan was the major benefactor of what turned out to be a grinding, exhausting West victory. The Falcons expended both of their big arms. Starter Steven Smith, who threw 103 pitches, and Gouge, who fired 90 without giving up a single hit,  pitched full games on the mound.

Meanwhile, the Mustangs’ 11-0 waltz against North Iredell at Staton Field gave East the NPC’s No. 1 seed for the playoffs — a random seeding of anywhere from 1 to 7 in the 16-team 3A West bracket.

Carson was relegated to wild-card status (a 13 to 16 seed), but is still certain to make the playoffs. It’s possible that the Falcons will join the Cougars as a wild card, but West’s fate mostly depends on what happens down the stretch with South Piedmont Conference teams such as Northwest Cabarrus, Cox Mill, Robinson and Central Cabarrus.

“Hopefully, West gets in,” said Carson assistant coach Brett Mulkey. “East, West, us, we’re all capable of making a run at it.”

Carson starting pitcher Hayden Simmerson was in a 1-0 hole after three batters and in a 2-0 hole after the top of the first, but once he found a groove he was excellent. He lasted seven innings and gave the Cougars a chance to rally. He struck out 10.

“I thought my stuff was good enough tonight to beat them again,” Simmerson said. “We had some errors early and I probably should have made better pitches, but then I settled in and my demeanor changed. We got some key hits and we came back.”

Down 4-1 at one point, Carson got back to 4-all in the bottom of the sixth.

Mason Duren relieved Simmerson to start the eighth and was able to keep West off balance and off the scoreboard until the 11th.

“We got a couple of great at-bats from Zach McNeely and Hunter Watts  in the 11th and they drew the walks (both on 3-and-2 pitches) that got Kennerly to the plate,” Graham said.

Dylan Driver relieved Duren with two out and two on in the 11th, and the first man he faced was Kennerly.

“He actually made a great pitch to Kennerly, down and away, but he put a great swing on it,” Mulkey said.

Kennerly, a lefty hitter, sent a looping liner hooking toward the left-field line. He hit the ball in a perfect spot. McNeely scored easily from second with the decisive run.

“We knew this might be our last game,” Kennerly said. “We didn’t want to lose. We needed a hit, and that one meant everything to me.”

Gouge got the Cougars out in the 11th, and it was finally over.

Second-seeded Carson (9-4) had hit Gouge hard last week, but not this time. He struck out seven.

“The difference was confidence, a better mindset,” Gouge said. “When I pitched against Carson last week, all I could think about was that a playoff spot was on the line for us, and I think that got to me. But tonight I felt very good, very confident I could make my pitches. I used both sides of the plate and trusted the guys behind me to make the plays.”

Third-seeded West (9-4) will play at top-seeded East in a tourney championship game that has been moved up to Wednesday due to Thursday’s weather foreceast. That game won’t have any affect on playoff seeds, but the teams will be competing for a trophy, bragging rights and a title.

Kennerly smacked an 0-and-2 pitch through the left side for a hit to begin the game and took second on a passed ball. JT Fecteau’s perfect bunt put Falcons on the corners. Smith hit into a force play up the middle to score Kennerly. Gouge stroked a ground ball that glanced off the glove of Carson first baseman Jake Harris when he tried to backhand it. That extended the inning, and Smith scored for a 2-0 lead when Carson shortstop Emory Taylor couldn’t corral Peyton Summerall’s line drive.

“In all the big games we’ve won, we’ve jumped out early like that,” Kennerly said.

Hunter Watts opened the third with a bunt toward third base. It wasn’t fielded cleanly, but it looked like Watts probably would’ve beaten it out anyway. Kennerly sacrificed Watts to second,  and when Fecteau blistered a double to center, the Falcons were up 3-0.

Carson got on the board in the third after Driver’s flyball eluded diving outfielders for a triple. He scored on Caden Hudson’s groundout.

Smith lofted a sacrifice fly in the fourth for a 4-1 West lead.

Smith, who struck out seven and walked three, took that lead to the fifth. That’s when Carson made it 4-3 on a couple of misplays around hits by CP Pyle and Harris.

Smith walked two with two men out in the sixth, and Carson scored the tying run on a passed ball. Gouge relieved Smith and got Driver on a popup to end the inning.

Carson center fielder Pyle made a super play in the seventh. Fecteau started the inning with his third hit, and Smith lined a rope, probably the hardest hit ball of the night, that appeared headed for the fence. Pyle retreated quickly, stuck up his glove and made the catch.

“CP is the only kid within 200 miles who could’ve made that play right there,” Graham said. “When that ball was hit, I thought we had the lead.”

Duren started baffling the Falcons in the eighth, while Gouge continued to mow down Cougars.

Carson had a chance to win it in the ninth when Driver led off with a pop fly to short right field that wasn’t caught. He made it to second base.

“We had a great baserunner at second with no outs, but we couldn’t get him home,” Mulkey said.

Gouge made the pitches he needed to make.

Smith started the West 10th with a sharp single, but Gouge hammered a groundball right at Taylor, a step from the second-base bag, and he started a double play.

But the 11th proved decisive. Two walks, and then Kennerly’s clutch hit.

Gouge got the Cougars out 1-2-3 in the bottom of the 11th, and the Falcons celebrated.