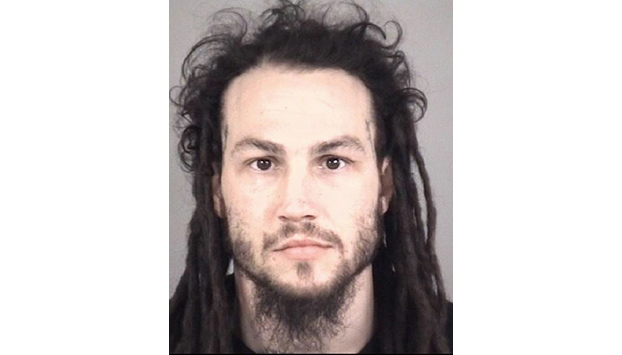 SALISBURY — A 33-year-old man is the newest addition to the Rowan Sheriff’s Office most wanted list after allegedly leading deputies on an early Sunday chase from Kannapolis to Charlotte and escaping.

Jason Michael Parrish, whose last known address is on Dairy Farm Road in Concord, is a 5-foot-9-inch white man with long black hair and facial hair, according to the Rowan County Sheriff’s Office.

He has tattoos on his arms of a block wall, tombstone, the words “hell born gangsta,” a woman, skulls and flames, the anarchy symbol and a cross with the words “in loving memory.” On his torso, Parrish has a tattoo of a gangster with guns and wings, a man holding a woman hostage, a man smoking and the words “Alicia.” Maj. John Sifford of the Rowan Sheriff’s Office said Parrish is a known member of a Folk Nation gang.

Sifford said Parrish was wanted on charges prior to Sunday’s chase and spotted at a Speedway gas station on North Cannon Boulevard in Kannapolis. When Parrish left, a Rowan County Sheriff’s deputy attempted to make a traffic stop. Parrish fled.

Law enforcement officers pursued Parrish down U.S. 29, Interstate 85 and Interstate 485. Officers lost sight of Parrish when he entered an area on W.T. Harris Boulevard in Charlotte with parking decks and hotels. Sifford said Parrish turned off his lights to avoid detection and sped through an intersection where law enforcement officers slowed down.

The Charlotte-Mecklenburg Police Department located Parrish’s vehicle, a Ford Escape, parked at a Hampton Inn and Suites hotel in Charlotte. Workers there said Parish wasn’t staying at the hotel.

In Parrish’s car, law enforcement officers allegedly found 12 grams of methamphetamine in three separate bags, 12 grams of cocaine, $933 and marijuana. Sifford said Parrish struck a vehicle in the parking lot with his car.

Sifford said Parrish is considered armed and dangerous. The Concord Police Department received a call that Parrish intends to get in a shootout with police.