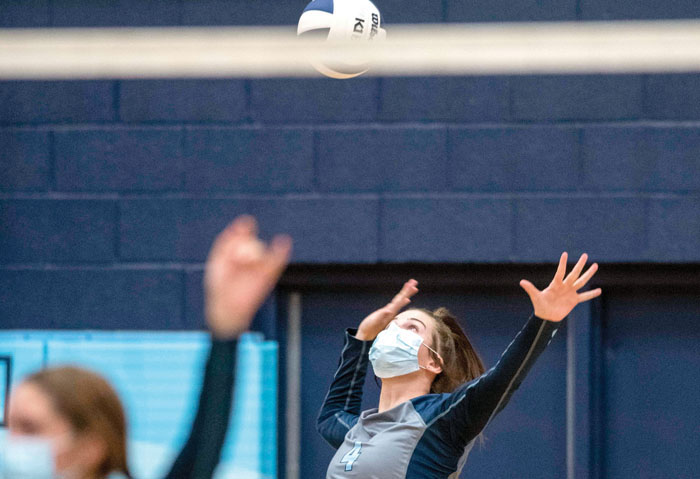 MOUNT ULLA — West Rowan volleyball coach Jan Dowling has said roughly a million times over the last four years that Allison Ennis is one in a million.

Ennis came back from two major setbacks to turn in outstanding senior seasons in volleyball as a setter and in softball as West’s shortstop. A softball injury in early spring 2019 — a broken wrist — seemed devastating until she suffered a volleyball injury seven months later that was awful enough that it made a broken wrist seem minor.

“I’ve coached 25 years and never coached an athlete who had to go through what Allison went through,” Dowling said.

“There were some tears and Allison was emotional during some really tough times,” West softball coach Jimmy Greene added. “But she always gathered herself. She always fought back.”

As a senior, Ennis was about 90% healthy for the volleyball season, at full speed for softball and showed what she was capable of. She was one of the county’s best in both sports and was one of the leaders of outstanding teams.

Ennis is the perfect winner of a new countywide award — the “Dr. Christopher Wayne McNeil Award for Courage.”

The award is sponsored, and the winner was chosen by a former teacher/coach who asked to remain anonymous. It is presented as a salute to McNeil, a coach and educator.

“Many in the community felt Chris McNeil should be recognized for his tireless and selfless work with children for an extended period of time,” the award’s sponsor said. “Chris has pushed through many physical challenges, but he’s always put others first.”

Her favorite sports memory tells a lot about her. She says it was West’s run to the volleyball regional final, her junior year. That was a run that was made partially without her. West had won its first 17 matches when Ennis suffered a season-ending injury. The Falcons won 11 more in a row, racking up conference championships before they lost in front of a packed house at home in the regional final.

“Nothing is harder than being on the sideline, not being able to do much, but I tried to tell my teammates everything that I could see on the court,” Ennis said.

Ennis first entered the public eye as one of the standouts for the Rowan County Little League World Series softball teams of 2015 and 2016.

Her volleyball skills caught up with her softball skills by the time she got to high school, and she believed it would be volleyball that she played in college. Volleyball moved faster, and she loved setting, the responsibility and the challenge of making split-second decisions on every play.

As a freshman, she played mostly jayvee volleyball, although she made some varsity appearances. She started for the softball team.

As a sophomore in the fall of 2018, she was an all-Rowan County setter for West’s 19-5 volleyball team.

The paragraph of her life had been a straight line of joy and accomplishment to that point, but her sophomore softball season brought that broken wrist.

Ennis was playing second base and sprinted to cover first base on a bunt. The throw came into the base line and it arrived simultaneously with a speeding runner. In the collision that occurred, Ennis’ arm snapped. Her wrist would bring lingering pain for months.

“What I learned from that was that even when you can’t play, you can still be your team’s biggest supporter,” Ennis said.

She returned to the dugout to cheer, but she was limited to being a pinch-runner for a 22-4 team that racked up three championships.

“Despite the broken wrist, she was still there every game yelling for her teammates,” Greene said. “She was the loudest voice in the dugout.”

Her friends and teammates, coaches and family, got her through that injury.

The wrist was still bothering Ennis when volleyball began in late summer 2019, but she worked past the mental blocks and got her timing back. She made the sets for powerful hitters Tori Hester and KK Dowling, and the Falcons got on a roll. They looked unstoppable right up to that day when she was injured.

“I took off running and my foot just fell apart,” Ennis said. “That injury came out of nowhere.”

That was the toughest period for her. She remembers “breaking down and bawling” in a pregame captains’ meeting at South Iredell.

“I really wasn’t myself for a while,” Ennis said. “I realized that the foot injury was so significant that it was going to mean not playing volleyball in college, and I knew volleyball was my best sport. I had some little breakdowns.”

She was on crutches for two months after surgery. She hobbled to all the matches, supporting her teammates, including her younger sister, Ashlee.

“The positive thing about that injury was that we were still able to win as a team and it brought me closer to my sister,” Ennis said. “That was a huge time for me and for her. While I was hurt, she was my left foot.”

By spring 2020, Ennis was back on both feet, running again and ready for her junior softball season. That one was stopped by COVID after the Falcons played three games.

She regrouped and planned to use the down time to get in the best shape of her life, but then the gyms shut down as well as the ball fields.

As a masked, socially distanced, virtual learning senior school year got under way, West’s volleyball team wasn’t thinking about championships; it was just hoping to have some sort of season.

The green light from the NCHSAA came in early November, and volleyball — and cross country — led a return to high school sports. The packed houses in Mount Ulla were a distant memory as the Falcons played in front of limited gatherings of 25, but they made the most of it. Ennis had 200 assists and 138 digs in a a 13-match season and was all-county in her favorite sport for the third time.

“Allison left everything on the court, every practice and every game,” Coach Dowling said. “The great thing about her is she treats them all the same. It doesn’t matter who we’re playing, you get the same great effort. There was never any slacking off for her. She never took a play off.”

Coach Greene remembers Ennis coming up to him before her final softball season this spring.

“She told me right from the start that she didn’t care how she did statistically, she was just going to enjoy all of it,” Greene said. “She finally got to play a softball season, and even though it was a shortened one, it was her best one. She was an awesome shortstop for us, and she blossomed as a hitter. She was always positive mentally. She came through in the clutch so many times.”

Ennis batted .359 and was an all-county softball player for the first time.

Ennis’ final game in a West uniform was a 3-2 loss at North Buncombe on May 7 in the third round of the 3A state playoffs.

Ennis and West basketball player Braden Graham were named on May 26 as two of the 35 NCHSAA Heart of a Champion winners. Ordinarily that award involves a trip to the Triangle for a luncheon, but there’s enough of a lingering COVID impact that the winners can only be recognized virtually and on social media this year.

“Heart of a champion — Allison Ennis is that award,” Coach Dowling said.

Graduation came last week, as Ennis and all the county’s seniors emerged from a dark tunnel, still smiling, after 15 months of uniquely challenging times.

“It’s good to see life at least headed back to normal now,” Ennis said. “No more masks and no more limits.”

She plans a summer of work, taking college placement tests and spending time with her family before the next big change in her life. She’s headed to UNC. While softball and volleyball molded her and made her the person she is today, she’ll be just a regular student in Chapel Hill. She plans to major in biology and exercise science. She’s already had some experience with surgery and rehab.

“Her career at West was all over the place, with more ups and downs than most,” Greene said. “But Allison has still got a happiness about her that people admire and she’ll still tell you that she’s blessed. She’s headed into the real world now, and she’s going to be an awesome addition to it.”

One in a million.