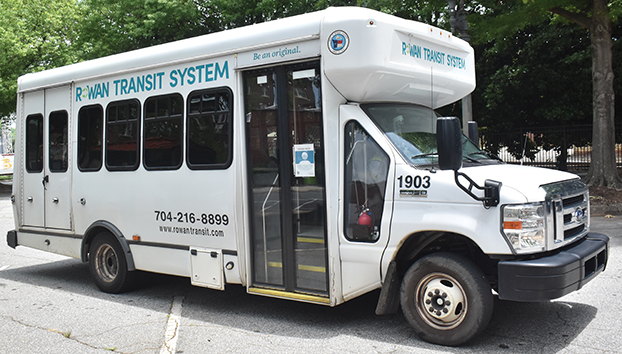 After a vote by commissioners on Monday night, the county will discontinue the Rowan Express. Ben Stansell/Salisbury Post

SALISBURY — The Rowan County Board of Commissioners on Monday voted to discontinue the county’s Rowan Express service, which provides people with low-cost transportation from Kannapolis to Salisbury with stops in between.

The request to discontinue the service came from Rowan County Transit and Mid-Carolina Regional Airport Director Valerie Steele, who cited falling ridership due to the COVID-19 pandemic and uncertainty surrounding grant funding as reasons why the program should be axed.

“Unfortunately, it’s not highly utilized,” Steele said. “It’s an ineffective use of the county’s funds we do have available and grant funding is not enough to cover the costs.”

The move to discontinue the service was endorsed last month by the Rowan Transit System Advisory Committee, which is composed of members who represent community stakeholders that might be especially reliant on public transportation.

Since July 1 of last year, Steele reported Rowan Express provided an average of 38 trips per day, which equates to an average of only 2.5 rides per revenue hour across the two buses.

Rowan Express, created in 2009, costs only $1 to ride, but is free to Rowan County employees and riders who transfer from the Salisbury transit system and Concord Kannapolis rider program. The service was formerly contracted out to a company, but it was brought in-house last year.

Over the previous nine months, the operating cost for Rowan Express was $163,696, with only $5,428 in revenue coming from riders. As a result, the net cost of the program was $158,816. During that time, the program was funded solely through the CARES Act funding. In the past, the program has been funded through the Rural Operating Assistance Program, but that funding was cut by the state last year and faces an uncertain future as the General Assembly works out the state’s budget this year.

By discontinuing the service, Steele said Rowan Transit would be able to reallocate resources to help bolster its ability to provide on-demand door-to-door ride services that provide Rowan County residents with “life-saving and life-sustaining” transportation.

“When I weigh out the human cost of it, it’s not about dollars, it’s about what we’re doing with the dollars,” Steele said. “Currently we have 16 people on a dialysis waitlist for one day a week. They’ve been on the list since 2019. We don’t have the funding available. So, if there were to have close to $200,000 available, there are people who truly need it for life-sustaining services just to stay alive with groceries or to go to a doctor’s appointment versus running a service that occasionally has no one on it.”

Connie Byrne, a Kannapolis resident, was the only person who spoke during the public hearing held regarding the decision. She cautioned commissioners to take into account the Rowan Express ridership numbers before the COVID-19 pandemic.

“I would encourage you to rework the cost to take into account the time before the nine months,” Byrne said. “For Pete’s sake, no one went anywhere for the past nine months because they were told not to.”

Even after hearing those numbers, commissioners were intent on discontinuing the service.

“As much as I hate to discontinue a public transportation option, I really think we have a huge need in this county for medical services and getting people to them,” Commissioner Judy Klusman said.

Many of the people who use Rowan Express, Steele said, rely on it to commute to and from work. Riders also use the service for shopping, visiting family and friends, connecting to Charlotte and connecting to the Amtrak stations in Salisbury and Kannapolis.

With Rowan Express discontinued effective July 1, Steele said Rowan Transit will explore alternative options to still provide transportation to those who relied on the service as their only way to get to work each day. One of those options could be to include them in the transit system’s door-to-door service.

“The option would be to rope in the piece of urban employment door-to-door service with our shared rides,” Steele said. “If somebody had no other option and we could qualify them under grant funding, it’s possible that we could pick them up from their location, take them to their job and vice versa.”