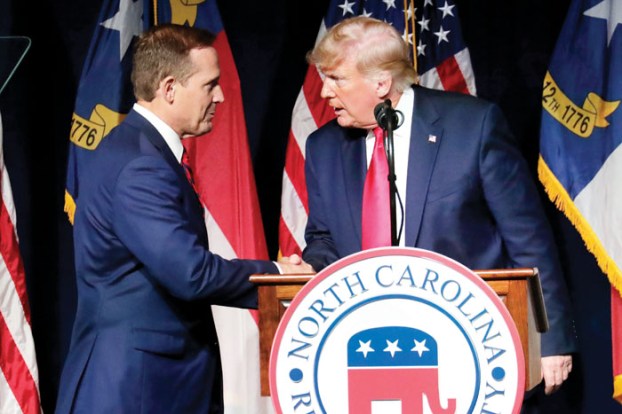 No one wants to be a Washington insider in North Carolina’s GOP primary for U.S. Senate, particularly if you’re not getting a former president’s endorsement.

Mark Walker, a former congressman, launched his Senate campaign in December and said in his announcement video he first ran for the U.S. House to be a “conservative warrior and bridge-builder for all of our communities.”

“And that’s exactly what we did in taking on the swamp,” Walker said.

In his campaign launch video, Pat McCrory, North Carolina’s former governor, said “Washington, D.C., has no commonsense.” Changing that “begins right here in North Carolina with you and with me,” McCrory said, touting his start in politics outside of the nation’s Capitol.

Likewise, Rep. Ted Budd launched his Senate campaign as a “guy from Davie County” and a small businessman who “ran for Congress to stand and fight alongside Donald Trump to drain the swamp and take our country back.”

Those three are the best-known candidates, but only one received the coveted endorsement during the N.C. Republican Party Convention over the weekend. It wasn’t Walker, who won a straw poll moments earlier, or McCrory. Rep. Budd, Rowan County’s congressman, received a full-throated endorsement from the former president. In a party whose leader remains Trump, it may be all that’s needed to make it out of the primary.

“I am giving him my complete and total endorsement. We’re gonna work with him. We’re gonna campaign with him,” Trump said. “You can’t pick people who have already lost two races and do not stand for our values.”

Stung by being passed over for an endorsement and the direct reference to his two gubernatorial defeats, McCrory quickly released a statement decrying Budd as a “a bought-and-paid-for Washington insider,” a reference to political advocacy group Club for Growth’s repeated financial support for Budd’s campaigns.

Lending additional credence to the fact that Trump’s support could be decisive, McCrory criticized Budd’s voting record, saying he’s “done more to oppose the Trump agenda than anyone in this race.” Budd voted with Trump 91.8% of the time, which is 18.2% greater than expected from presidential election results, according to data analytics website FiveThirtyEight. That’s not as high as Walker, 94.3%. McCrory doesn’t have a voting record in Congress.

What McCrory left out, however, is Budd is the only candidate in the race who voted to overturn election results on Jan. 6 in favor of the former president. For Trump, that’s more important than any other test of loyalty.

Opponents might argue Budd is a Washington insider, but the Davie County Republican has Trump’s endorsement. That means the lead spot in North Carolina’s GOP primary race for U.S. Senate.

Readers of salisburypost.com lately have been asked to sign up for a subscription after passing 15 stories in a 30-day... read more