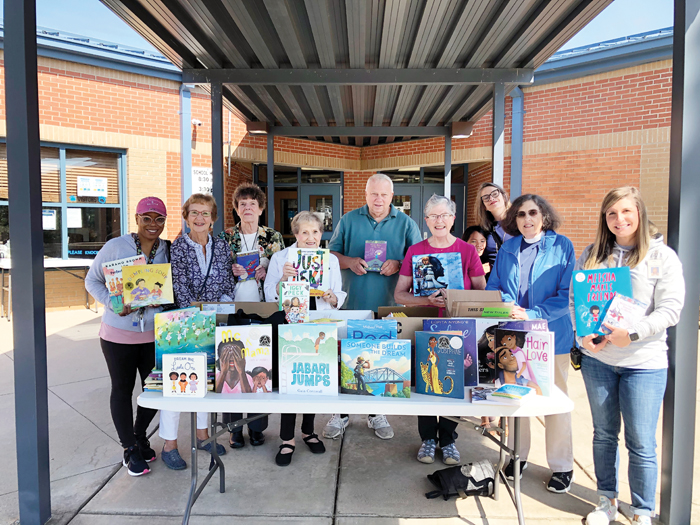 St. Luke’s Episcopal Church has been striving to become the beloved community through initiatives and efforts centered around racial healing in our community and beyond. The parish’s latest endeavor in this area was led by its “Pathways” group, facilitated by the church’s deacon, the Rev. Bonnie Duckworth. The group spearheaded a member-wide campaign which garnered a total donation of $2,500 worth of books for the media center of Elizabeth Duncan Koontz Elementary School. The St. Luke’s Foundation also contributed to the campaign. All of the books purchased contain stories and images that reflect the diversity of students at Koontz. The idea for this project began in a Zoom gathering on racial diversity last fall.

Koontz Reading and Design Coach Siobhan Cooke, was enthusiastic about working with St. Luke’s on selecting titles for the students. “Literacy is paramount to the great work that we are doing here at Koontz and we are so excited and appreciative of this partnership and outpouring of love from St. Luke’s,” Cooke said.

With help from Cooke, books were selected that present the character’s culture accurately and sensitively, feature marginalized protagonists of color, empower children of different ethnic backgrounds, and have strong literary merit. Alissa Redmond, owner of South Main Book Co., also assisted with the purchasing and curating of this large book donation.

St. Luke’s has a long history with the legacy of Elizabeth Duncan Koontz, namesake of Koontz Elementary. Koontz was a member of St. Philip’s Episcopal Church in Salisbury before it merged with St. Luke’s where she was a member until her death in 1989.

Born in 1919, Koontz was a leader in education, civil rights and the women’s movement. She was the first African-American president of the National Education Association and was director of the United States Department of Labor Women’s Bureau. A native of Salisbury, Koontz received her undergraduate degree from Livingstone College. The Salisbury Human Relations Council (HRC) now awards the “Elizabeth Duncan Koontz Humanitarian Award” every year in remembrance of Koontz. This past January, an inaugural commemorative liturgy of Koontz was held at St. Luke’s on the anniversary of her death. The parish hopes to establish Koontz in the sanctoral calendar of The Episcopal Church.