South Sea Dancers shake it up at Spencer Public Library 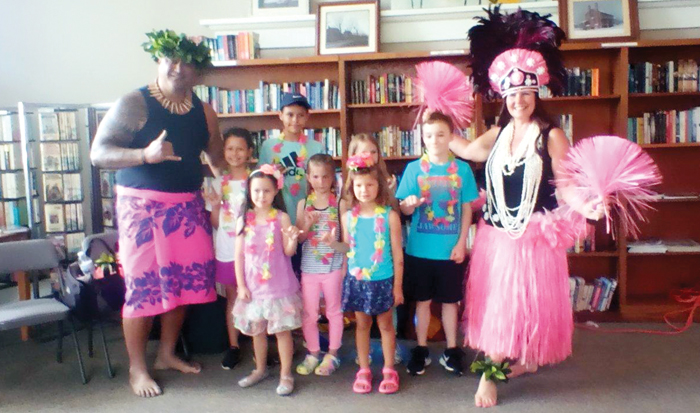 Chief Olomua and his wife Selena pose with students after a program at the Spencer library.

On June 1, Chief Olomua and his wife Selena fascinated a small group of children and adults at Spencer Public Library with their flashing dance moves complete with sticks, feathers and grass skirts. Chief Olomua, originally from American Samoa, created an impressive sight with his crown of leaves, sharktooth necklace and an intricate tattoo. He taught the children the different ways to say hello in Hawaiian and Samoan. His wife regaled with her explanations of the various types of dances, then showed examples of all of them with flamboyant headdresses, bamboo sticks, an ipu (gourd drum) and grass skirts. The couple explained how children are taught to hula in school to keep alive the traditions of the islands. The chief, also said that the missionaries who came to the islands in the 1800s did not know how to communicate with the islanders. The Hawaiians used the motions of the hula to explain their culture. They played traditional music which featured a spiritual component which was the original hula music. Then the dancers told of the times after World War II, when many tourists came and the music changed to a more swing band style and the sound of ukelele music.

The highlight of the event was the participation of the children in the hula dance. Selena demonstrated the various hand motions such as the waves of the sea and casting a fishing line in the ocean as she taught a simple song to the children. Each child had received a lei and at the end of the performance by the South Sea dancers, the crowd sat on the floor for a Hawaiian luau. Everyone ate pineapple chunks, bananas, mangoes and coconut cookies. “Hawaiian Punch” was served as well.

If you are interested in hosting these dancers from Charlotte, contact Beverly McCraw, Spencer librarian, for more info. More pictures of the event are on the library’s Facebook page. Like and follow to see more events for the Summer Reading Program this summer. The theme is island adventure and the program will focus on the islands of Hawaii and Haiti. A story hour for ages 4-10 is planned every Tuesday in June and July. The exact times will be posted on FB, so check it out. Everyone will read a story, make a craft related to the island adventure theme and have a simple snack.