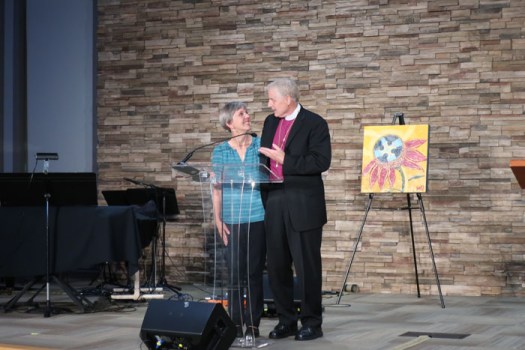 Submitted photo -- Wendy Smith, Bishop Tim Smith’ s wife of 37 years, hoins her husband on stage. The ‘Strength for the Journey’ art by Sister Michelle Walka was on all assembly materials.

Every six years, Lutherans in North Carolina meet to elect a bishop. Bishop Tim Smith was re-re-elected on the first ballot Thursday as the three-day Synod Assembly took place digitally this time around.

He did not see it coming.

Smith said on Saturday afternoon he was “an anxious spectator.” He had not participated in assembly planning because he had decided to put forth his name for bishop. Voting is done by ecclesiastical ballot, meaning that any rostered minister in Word and Sacrament is eligible to be nominated.

“We have an election!” said Bill Horne, vice president of the ELCA, after he read the results of the votes. He read three dozen names with votes in the single digits. The second-highest vote-getter was the Rev. CeCee Mills, assistant director of evangelical mission, with 11 votes.

Horne participated in the election process as the sitting bishop does not. More than once during the assembly, Smith expressed his appreciation for the confidence placed in him for a second term.

Although the event was held digitally, about 40 staff members and other key leaders gathered at St. John’s Lutheran Church, which served as the host site. All attendees were fully vaccinated.

Smith thought he may get re-elected on the third ballot. There can be up to five ballots cast before a bishop is selected. The fifth ballot typically occurs when there is no sitting bishop.

“It was unusual,” Smith said. “It was a surprise.”

It was no surprise to Bishop Emeritus Leonard Bolick, who served for
181/2  years in that role, and from whom Smith took over the office six years ago.

“I knew he would be re-elected on the first ballot,” Bolick said Saturday afternoon. “I thought it was a wonderful affirmation of Tim. He has a great staff. It was an upbeat assembly, and it made me feel proud to be a part of the church.”

Smith gave kudos to Michael DeNise, the synod’s director of finance, who served as assembly organizer. Likewise, he praised St. John’s, which shared its space in the Faith Center at no charge to the synod.

“That space was just perfect for us,” Smith said. “Not just the lighting and the way it was designed, but the fact that it was available to us.”

Smith decided to stand for re-election, he said, mainly due to the fact that “there are so many people whose jobs depend on me. Many of the calls are co-terminus to mine. I didn’t want to leave them in the lurch.”

Looking back over the past six years, Smith noted that the Conference of Bishops — 67 in all counting ELCA Presiding Bishop Elizabeth Eaton and the ELCA secretary — had only about 11 female bishops when he joined them. Last year, he said, there were 34 female bishops.

The Rev. Kevin Strickland, a married gay man, became bishop of the Southeastern Synod two years ago, and the Sierra Pacific Synod recently elected a transgender bishop. There are also five bishops of color, three more than when Smith first took office six years ago.

When Smith and Wendy, his wife of 37 years, first moved to Salisbury, his parents, the late Marcus and Dot Smith, were still alive. They played a key role in their decision to leave his call at Redeemer Lutheran Church in Atlanta. The Smiths now have four grandchildren — three boys and a girl — with a fourth grandson due in October.

“During the pandemic,” Wendy Smith said, “Tim’s gifts of steady leadership, compassion, assurance of faith, and abundance of hope made me realize that he might be called to serve another term. Tim is happiest when he is serving and helping others in the name of Christ. I am grateful to be on this journey with him as he serves as bishop of the North Carolina Synod.”

At assembly, Smith talked about the fact that politics should derive from one’s own religious convictions — and not the other way around.

“I don’t see myself as an activist,” he said. “My convictions derive from my faith. Racial justice is a Jesus thing, and it has political implications.”

Smith doesn’t hide behind his collar.

“I’m standing right here,” he said. “We are called to make a difference in the world based on loving our neighbors.”

Quoting Eaton on his feelings for the next six years, he said, “I’m not at all optimistic. But I’m always, always hopeful.”

He added, “What do we believe God might be calling us to be about? Is loving my neighbor going to cost me something? Yes, it will.”

Along with the bishop’s election, assembly delegates heard reports and presentations from numerous church agencies. They also elected members to Synod Council — its statewide leadership body — and delegates to the next churchwide assembly, Aug. 8-12, 2022, in Columbus, Ohio. 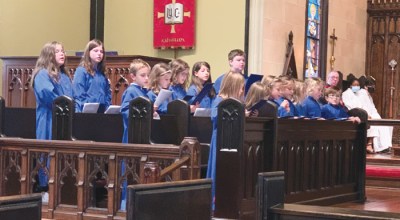