History of Rowan: In 23 objects, lots of stories 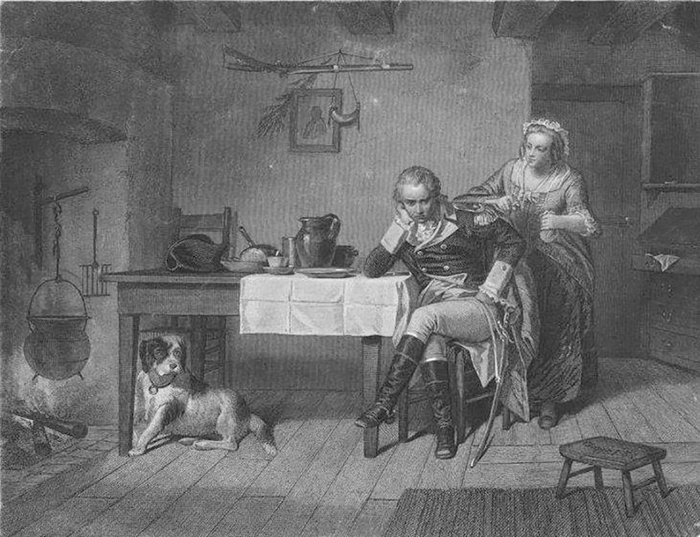 This image of an 1858 painting shows Gen. Nathaniel Greene, commander of America's revolutionary forces in the southern states, being approached by Elizabeth Maxwell Steele when he arrived in Salisbury on Feb. 2, 1781. The original painting is owned by Rowan Museum.

Editor’s  note: This is the first in a series of articles on county history, based upon the holdings of the Rowan Museum and other historical organizations. The intent is to highlight an object at the first of every month, which will provide innovative content about local heritage.

Imagine how frightening it must have been.

February 2, 1781, was gray, rainy, the air icy.  Elizabeth Maxwell Steele, proprietor of one of Salisbury’s most prominent ordinaries, saw a general come through her door, by himself.

Nathanael Greene, commander of America’s Revolutionary forces in the southern states, had arrived, in his own words, “fatigued, hungry, alone, and penniless.” He had just ridden through the dreary day from the vicinity of the Catawba River, where the militia of Rowan and Mecklenburg counties had been routed by an invading British army. He knew, and Mrs. Steele learned, that the British would soon be in Salisbury. And the forces he had called out to defend the town had flown to the woods.

His abject despondency—and her bold reaction—is depicted colorfully in an 1858 painting, one of the more famous from a period of artistic endeavors that focused upon the patriotic Founders of the nation.  An old print of that painting is one of the more valued objects in the Rowan Museum. It shows Greene warming himself at the fireplace, awaiting breakfast. Mrs. Steele, approaching him, has in her hands two bags filled with silver and gold coins.

“General,” she announced, “take these, for you will need them, and I can do without them.” The grateful commander, it is said, was so moved by her action that he became emboldened to carry on the resistance to the invasion. On the wall behind him were portraits of King George III and Queen Charlotte, for whom nearby Charlotte had been named. Greene reached for the portrait of the king and scrawled in pencil on the back, “O George, hide thy face and mourn!” Then he replaced the framed engraving with the face to the wall. (Those portraits are also among the most priceless objects of Rowan County heritage; they currently belong to Thyatira Presbyterian Church.)

Now rested, fed, befriended, and funded, Greene organized the removal of arms, supplies, and the remnants of his army to the other side of the Yadkin River, swollen to flood stage from the recent rains. The task was completed within a day, just in the time on February 3 to get away from the advancing British. They got to the river when the last Americans were being ferried to the other side. Only a small contingent of local militia, under Colonel Francis Locke, fired upon them, then went downriver to cross over in the last available canoes.

The cold, benumbed British spent two days recuperating in Salisbury. The army was camped on a long swathe on the northwest end of the tiny town, stretching from where the Rowan Public Library is today past where the Baptist Church is. No story has come down to us about what Mrs. Steele did during the British occupation but she must have housed and fed some British officers. We can assume that she had the foresight to turn the picture of the king back the right way. We can also assume the British searched the tavern for any money to be found.

The British left the morning of February 6 and proceeded up what is today’s Woodleaf Road (one can see the old colonial roadbed just to the right of the road where it crosses Second Creek). They were on their way upriver to the Shallow Ford (not far south of where I-40 crosses the Yadkin today). They hoped to acquire more supplies in the rich area of Wachovia and go after Greene again.

Meanwhile, the remaining American forces rendezvoused at Guilford Courthouse, at today’s Greensboro. Greene, realizing his army was still in no shape for battle in winter, made a bold decision. He would march it even further if the British moved north from Wachovia, going all the way into Virginia and crossing the Dan River, itself flooded like the Catawba and Yadkin had been. That move would put another buffer between Greene’s forces and the British. As the Americans retreated further, the British sped up their pursuit.

During the second week of February the British and Americans played cat and mouse in what historians have since come to call “the race to the Dan.” The Americans fended off each British advance in a series of maneuvers that strategists still study today. Rowan militia were part of the campaign and would later play a role in the subsequent battle at Guilford Courthouse on March 15, 1781.

The Rowan Museum will sponsor a Revolutionary War reenactment at the Old Stone House on June 12 and 13. The encampment will portray local militia who have answered the call by General Greene to fight the invaders, the Southern Continental Army, and British Regulars. Cavalry and artillery will also be on site. A few of the reenactors might even have a story about the last time they dined at Mrs. Steele’s. More information about the event and the Rowan Museum can be found at rowanmuseum.org.

Dr. Gary Freeze, a retired Catawba College professor of history, is a volunteer researcher for the Rowan Museum.