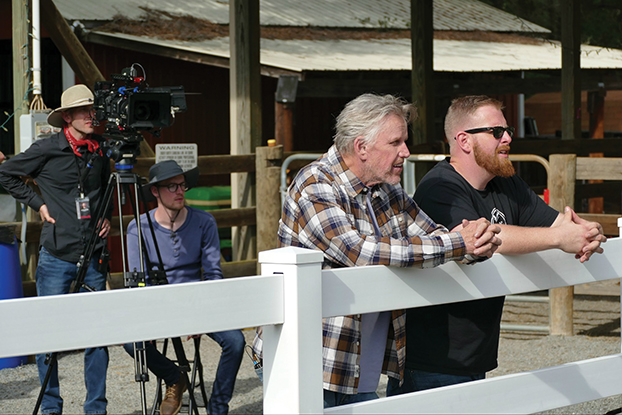 Gary Busey and Jacques Belliveau shoot a scene in "Regge: A Millenial Depression Comedy," which will premiere at the Meroney Theater on Friday night. Photo submitted.

SALISBURY — A feature film shot primarily in Salisbury starring Oscar-nominated actor Gary Busey and a miniature therapy horse will premiere at the Meroney Theater on Friday at 7 p.m.

Titled “Reggie: A Millennial Depression Comedy,” the movie is a semi-autobiographical work written and directed by stand-up comedian and Salisbury-resident Jacques Belliveau. The film follows a character based largely on Belliveau, who relies on a miniature therapy horse named Reggie to deal with mental health struggles.

“Hopefully, the movie connects with people like I want it to and opens their eyes a little bit to the mental health stigma,” Belliveau said.

The film was originally set to debut last summer, but the COVID-19 pandemic forced Belliveau to delay the premiere. There will be four showings of “Reggie” over the weekend, including a Friday night premiere complete with a red carpet and three screenings on Saturday. Busey and Kiwi, the miniature pony who plays the titular therapy horse, are scheduled to be in attendance for the red carpet event.

Belliveau wrote the script for the movie in a single night in May 2018 after being hit with an epiphany while working out at The Forum, hours before he was set to perform a comedy show in Cornelius. During his show that night, Belliveau was going to perform a bit about miniature horses. He was rehearsing that bit in his head when he struck with unexpected inspiration.

“I was working out and on my Spotify playlist, a song on my discover playlist by an artist named Spose called ‘Where would I B without U’ came on,” Belliveau said. “For some reason, me reciting miniature horse jokes in my head while listening to that song and working out sparked an idea to combine that with my mental health struggles.”

After his comedy show that night, Belliveau went home and spent the next eight hours hammering out the script using an app on his phone.

“It was mostly adrenaline,” Belliveau said.

Immediately after finishing the first draft, Belliveau sent it off to several film studios. A few of those studios reached out to him about the movie, but Belliveau eventually decided to direct it himself and shoot it locally.

Although the vast majority of the movie’s characters were cast using local talent, Belliveau made an effort to recruit a few celebrity actors.

“My basic rule on life is, it’s always a “no” until you ask,” Belliveau said. “Once I established HafCaf Productions and knew I was going to make this movie, I wanted to put as many easter eggs from my life into this movie. I just started reaching out to artists and actors who have had an impact on my life.”

One of those actors was Gary Busey, who starred in Belliveau’s favorite childhood movie: “Lethal Weapon.”

Busey agreed to star in the film and spent 14 hours in Salisbury shooting his part as Peter Russel, one of the brothers who owns the farm where Reggie is found.

“It’s rare that I’m super proud of anything I do, but that morning I woke up and realized that I was going to act and direct with an Oscar-nominated actor in Salisbury in something I wrote and I’m directing,” Belliveau said. “That was pretty cool. That was a good feeling.”

Spose, the artist who helped ignite Belliveau’s creative engine to write the movie, also agreed to act in the film.

With the help of local production company sixfootkitten, “Reggie” was filmed in just 43 days.

“It was supposed to take less, but working with a miniature horse was tricky,” Belliveau said. “There’s an old adage in Hollywood that says for your first film, you should never work with children, animals or too much CGI. Because I’m a glutton for punishment, apparently, this movie has children and animals in it with a minimal amount of CGI.”

On top of the other filming challenges, Bellieveau realized during the course of filming that he’s actually allergic to horses. With the help of medication, he made it through filming with only a few sniffles.

Having to wait a full year to see his movie on the big screen has been tough for Belliveau, but it did allow for unexpected editing time.

“The final cut that we were going to premiere was done last February, but since I’ve been sitting in an apartment by myself for the last year, I’ve watched it about 60 times and I’ve changed so many things,” Belliveau said. “I’ve changed music around and made little tiny edits here and there, just because I didn’t have anything else to do.”

Belliveau has watched the movie dozens of times, but he’s still not sure if he’s ready to watch other people see it for the first time.

“It’s terrifying because the entire movie is very real,” Belliveau said. “It’s based on my personal experience with depression, anxiety, ADHD and isolation and relationships and stuff like that. It’s very true to life, I just added a little miniature pony and Gary Busey to it for some distraction.”

After the premiere, Belliveau and other members of the cast and crew will host a Q&A. An afterparty will then be held at The Fish Bowl. Tickets for “Reggie” can be purchased online at www.hafcafproductions.com. By using the promo code “reggiefriend,” customers will get 10% of the ticket price. Tickets are $30 for the Friday night premiere and $20 for Saturday’s showings.

A portion of the proceeds will go to Stampede of Love, the Raleigh-based nonprofit that manages Kiwi and other therapy miniature horses.

After its Salisbury premiere, Belliveau said he plans on touring the movie across the country, with wider distribution to streaming platforms coming early next year.