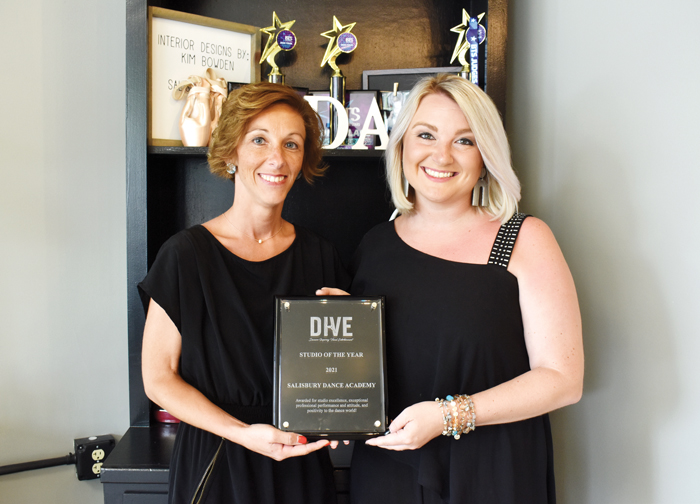 SALISBURY — When Spencer Ann Brown saw the notification on her phone, she almost didn’t believe it was real.

“We were completely in shock,” Brown said.

The Instagram alert that pinged on Brown’s phone last week informed her that DIVE Dance Competition had named Salisbury Dance Academy its 2021 Studio of the Year.

“This studio was amazing on and off the stage, kind and polite backstage, and went the extra mile to compliment other studios and dancers,” DIVE Dance Competition wrote in a Facebook post announcing the award.

The information caught Brown, who co-owns the dance studio with Kristie Thomas, by surprise. She happened to be talking on the phone with Thomas at the time, who was a little worried after hearing Brown react to the good news.

“I thought something happened, but then she started reading off the article. I said ‘”You’re kidding me,'” Brown recalled.

Being named Studio of the Year was an emotional moment for Brown and Thomas, especially because Salisbury Dance Academy is only in its first year of operation after opening last fall.

“For us to get this award means a lot because we both have talked about doing this for so long,” Thomas said. “To be able to pour our hearts into the studio and do this day in and day out after leaving our first job to come do this, and the kids see how much we love doing this, it really means a lot.”

Brown and Thomas, both elementary teachers for Rowan-Salisbury Schools, opened the academy at 204 S. Main St. in early August after dreaming about running their own studio for years. Pandemic conditions initially forced them to limit class sizes, but the studio has continued to add more students as restrictions have eased and is now up to 85 pupils.

“It’s been pretty awesome because no matter what point in the year it was, even in February, we were still getting enrollment,” Brown said. “We noticed as things were calming down with the vaccine coming out it seemed like people were more open to putting their kids in that environment again.”

The studio has five dance teachers, including Brown and Thomas, who provide instruction on a variety of styles.

Despite only opening in August, the studio participated in five competitions in the winter and spring, including one hosted by DIVE in Kannapolis in early May. DIVE didn’t announce Salisbury Dance Academy as the winner of its Studio of the Year award until last week, which is partially why Brown and Thomas were so surprised by the honor.

The fact that the studio won the award wasn’t as much of a shock to Monique Smith, whose 11-year old daughter Josie and 15-year old son Braxton both enrolled at Salisbury Dance Academy last year.

“This is a great studio,” Smith said. “They do promote positivity, which is what DIVE stands for.”

Salisbury Dance Academy’s already successful competition season isn’t over quite yet. The studio will send dancers to compete in both the Showstopper East Coast Finals in Myrtle Beach in June and the Starquest World Final in Virginia Beach in July, along with hosting summer dance camps.

Looking toward year two, Brown and Thomas have big plans for their studio. To accommodate its growing number of students, the academy is expanding upstairs.

“The biggest class we have has 20 kids in it and when you put that many in a room dancing, it can get kind of crowded,” Brown said.

Wallace Realty, who owns the downtown building, is currently renovating the second floor. Once it’s finished in August, the upstairs will house two additional dance studios, one of which will be used for smaller classes or private lessons.

Brown and Thomas don’t want to their expansion to be just physical. The duo is also hoping to keep adding more students.

“Our goal that we’re shooting for is to reach 100 kids next year,” Brown said.