Nonprofit collaborating with VA to teach pickleball to local veterans 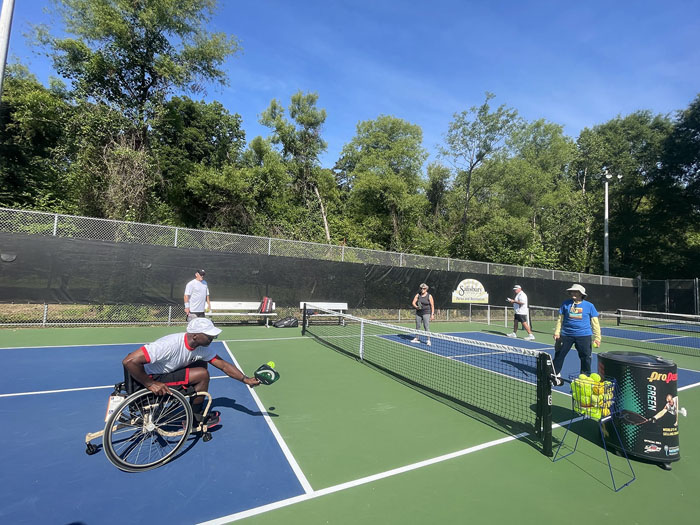 SALISBURY — A nonprofit military organization is collaborating with the local VA to bring adaptive pickleball games to veterans at City Park.

Military Adaptive Court Sports is a nonprofit organization founded in 2009 for the rehabilitation of veterans through recreational sports clinics. It formed partnerships with community organizations to host pickleball and racquetball clinics at VA hospitals from Durham to San Diego.

The clinics last six to eight weeks, with an average of 12 participants each period. MACS reports nearly 700 veterans were helped with the program last year across its nine nationwide clinics.

In collaboration with Jack Meggett, a recreational therapist at the Salisbury VA, founder Steven Harper will lead a six-week clinic Tuesday mornings around 9:30 a.m., beginning June 8 at Salisbury City Park on Lake Drive. He’s anticipating a graduation ceremony for participating veterans on July 29.

“And after six weeks, they know they’ve accomplished something,” Harper said.

Both racquetball and pickleball are fast-moving games that can help veterans regain their physical strength, coordination, agility, balance and mental clarity. But most important is the camaraderie and “new family” gained while enjoying the sport, Harper said.

Harper is a disabled veteran who served in the Navy for two decades and says he understands the impact recreational sports can provide veterans and their families.

Harper recalled two veterans in particular who helped inspire him to begin this program. More than a decade ago, Harper and his daughter met Doug, a veteran who is blind in one eye and missing both legs and one arm, during a racquetball tournament. Nevertheless, a paddle was duct-taped to Doug’s hand and he played in the tournament.

Harper also recalls meeting a Marine veteran who was missing a limb. Harper wanted to teach him the sport, sparking his calling to create and lead the program.

“Once they touch the ball, they’re hooked,” Harper said. “And it’s something new.”

Harper said both sports encourage self-confidence, a trait that’s often lost among veterans after they retire or return home. Pickleball is a sport that’s easier on the body and allows for more sociability. The social nature of the game allows veterans to forget about other problems for just a little while.

“All of that just goes away when they’re playing,” Harper said. “And in 10 minutes, you’ve got a new family.”

Post and his brother Jon, a pickleball extraordinaire, both contributed to a donation that covered the costs of the courts. Alexander said seeing full courts be used shows the council’s decision was well worth it.

Citing a 2018 article from USA Today, MACS credits pickleball with being the fastest growing sport in America, with a steady group of at least 3 million players across America.