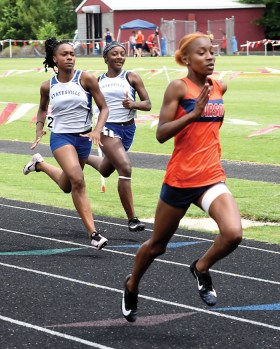 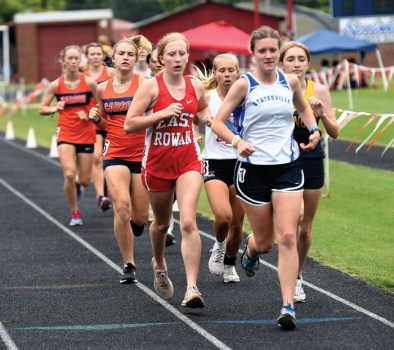 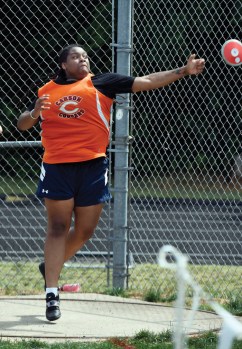 Carson's Iyonna Parker in the discus. photo by Wayne Hinshaw, for the Salisburyu Post 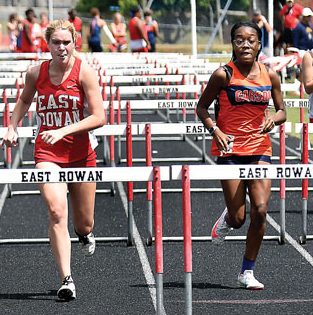 Carson also had taken league championships in 2018 and 2019 before COVID erased the event from the schedule in 2020.

It was a three-team race.

East Rowan (74), Statesville (56) and West Rowan (21) rounded out the scoring in what will be one of the last events of the NPC as fans have known it. Realignment is coming in the fall, and Carson, East and West will be part of a vastly revised South Piedmont Conference that will include South Rowan, three Cabarrus schools and Lake Norman Charter.

Junior Iyonna Parker won the discus with an effort of 101 feet, 2 inches. Evonna Parker was third and Emily Kann added a fifth-place contribution.

In the shot, Iyonna Parker won with a heave of 34-7. Holly Stowe and Evonna Parker gave the Cougars a 1-2-3 finish in the event.

Zoe Holbrook totaled 16 individual points with thirds in both hurdles and a fourth in the long jump.  Makayla Borst racked up 14 points by placing in the 400, 1600 and 3200.

A second in the 4×800 relay also helped the Cougars’ cause.

Meredith Bonner was a standout for the Mustangs, taking second in the 800 and 1600.

Kaylyn Lentz placed in all three dashes for West and accounted for 10 of the Falcons’ 21 points.