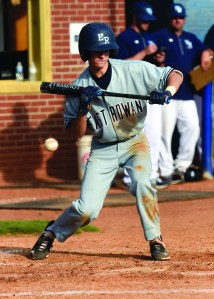 The win kept the Mustangs tied for first with Carson.

Aiden Schenck had four hits and six RBIs. He hit a grand slam.

Austin Fulk was 5-for-6 with five RBIs. Morgan also Padgett had five RBIs.

Jake Hunter pitched the first inning. Maddox Henderson pitched the next four and struck out  nine. They combined on a no-hitter.

East finishes the regular season at North Iredell, a 13-2 loser to South Iredell on Tuesday.

Max Crawford had three hits for Salisbury in a 7-5 non-conference loss at Surry Central on Wednesday.

Will Webb had two hits and two RBIs. Vance Honeycutt had a double for the Hornets’ only extra-base hit.

South Rowan won 8-4 against Southern Lee in a non-conference game played on Wednesday.

In other games, A.L. Brown lost to Grimsley 16-0 in a non-conference game and Davie fell 10-2 to Reagan in Central Piedmont Conference action.