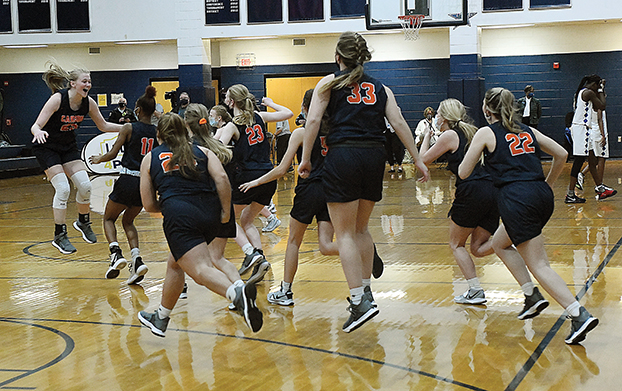 The Carson team rushing the floor in celebration. photo by Wayne Hinshaw, for the Salisbury Post

They’re going to do it.

Despite worry about whether high school athletes would have a season amid the pandemic, high schools in Rowan County and North Carolina are on the verge of wrapping up a full slate of sports in just a few months.

High school sports may seem like a side dish for the main course — a good, public education — but they provide much more than exercise to the athletes. For many students, high school athletics are a path to a low-cost or free college education. There are probably athletes whose chances of receiving a scholarship were greatly helped by having a senior year. Others will benefit from the experience of another year learning and growing. Spring sport seniors this year were robbed of their junior year entirely.

Sports instill sportsmanship, teamwork and leadership in their participants. In communities like Salisbury and Rowan County, high school sports also are a critical part of local life. This year, local sports offered a shot of vitality to a community otherwise yearning for a return to life as it once was.

Most notably, local schools this year notched championships in three sports — swimming, basketball and football. Champions in two of those sports were Salisbury High students. Between baseball, tennis, wrestling and track, local schools still have a chance at improving on that total.

Who can forget Salisbury High’s magnificent run to a football championship — earned on the leg of Will Robins in critical playoff games, a stout defense and an a once-in-a-lifetime performance by quarterback Vance Honeycutt in the championship game.

Impressive as the football championship was, it’s going to be hard for any athlete to top the five state titles in one year by Salisbury High’s Knorr twins.

The Carson girls basketball team rattled off 19 wins in a row and a 51-40 victory in the state championship game to claim their own title.

Rowan County might be on its way to an embarrassment of riches in the 2020-2021 high school sports season. Though, several high school championships amid an otherwise dreary year-and-a-half don’t seem so bad.

Without sports this year, what would have become of the talent from the champion local athletes? Some could have competed in the 2021-2022 year, but high schoolers aren’t like collegiate athletes, who are getting one more year if they want it.

Even though seasons were shortened by COVID-19, that sports were played at all will be incredibly meaningful to the athletes, parents, coaches and community. It’s worth celebrating.