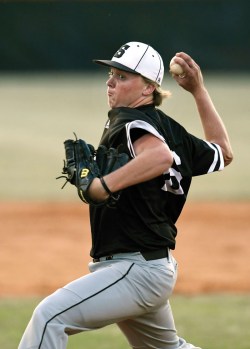 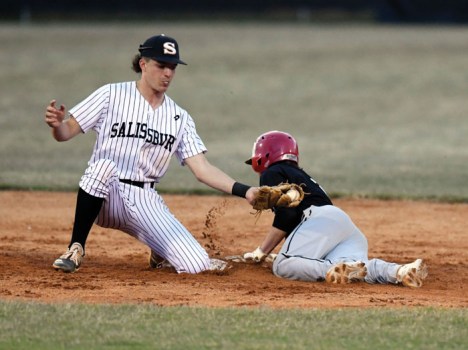 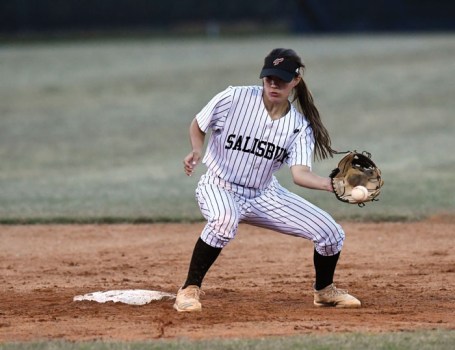 Salisbury Ellen Yang 5 taking a throw at 2nd base. photo by Wayne Hinshaw, for the Salisbury Post 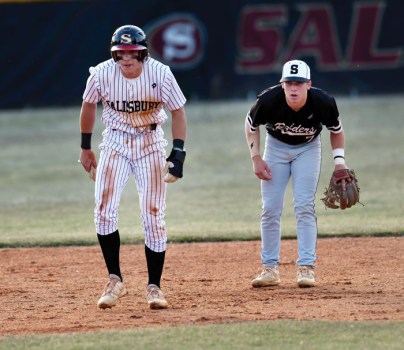 Salisbury's Vance Honeycutt 6 on 2nd with South's Nathan Chrismon 7 in back. photo by Wayne Hinshaw, for the Salisbury Post

SALISBURY — Chandler Oddie’s brilliant relief performance on Tuesday propelled South Rowan’s baseball team to a 6-3 win at Salisbury and a berth in the 2A state playoffs.

It was a tough game for the Raiders (8-3, 7-2) on an emotional Senior Night for Salisbury. It was the final home game at Robertson Stadium for Salisbury seniors Vance Honeycutt, Max Crawford, Chase Shoaf, Jackson Murphy, Ellen Yang and Aaron Yang.

Oddie (2-0) made the difference. He took the mound in the fourth inning in a 3-3 game, relieving Luke Hiskey. Salisbury (5-5, 4-5) didn’t get a base runner the rest of the way. Oddie struck out seven.

Salisbury struck quickly in the bottom of the first, with Crawford following a single by Honeycutt with a two-run homer, his first of the season.

South picked up single runs in the second and third against Salisbury starting pitcher Shoaf (2-1) to get back to 2-all.

The Hornets took a 3-2 lead in the bottom half of the third when Honeycutt doubled and eventually stole home as part of  double steal.

South tied it 3-all in the fourth.

South took its first lead in the fifth when Jackson Deal scored from third base when JD James grounded into a fielder’s choice. James was the first batter Honeycutt faced as a relief pitcher. Shoaf had moved to first base with after walking Deal and hitting Jacob Ritchie with a pitch.

South took advantage of Salisbury miscues to tack on two insurance runs in the sixth, and Salisbury was 12 up and 12 down against Oddie.

Murphy pitched the seventh for the Hornets.

Both teams concluded the regular season.