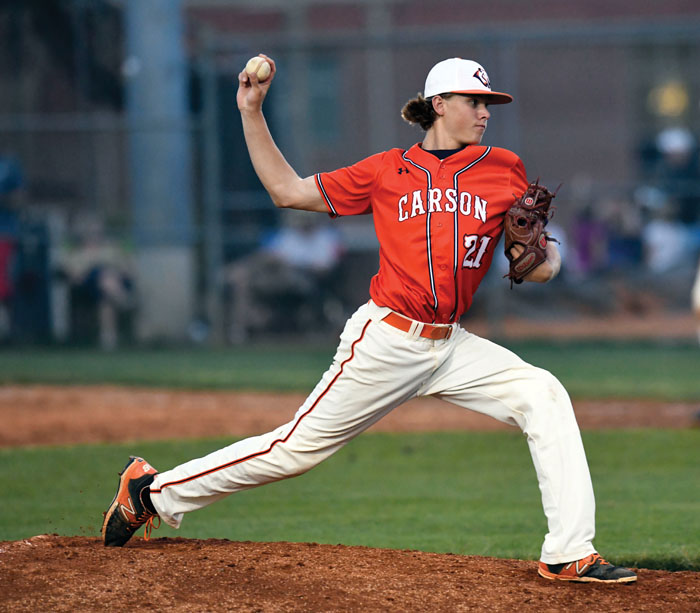 Carson pitcher Hayden Simmerson was on target Tuesday night against East. File photo by Wayne Hinshaw, for the Salisbury Post

CHINA GROVE — You probably don’t know much about sophomore Hayden Simmerson, but that’s about to change.

“I was ready to roll from pitch No. 1,” he said after Carson (8-3, 7-3) notched a 5-0 victory and stayed even with conference co-leader East Rowan. “Such a great win for the team. It brings us one step closer to the playoffs.”

Simmerson wasn’t overpowering, but he pitched with guile and cool assuredness — sort of like the kid who already knows what he’s getting for his birthday. Braiding a sneaky-quick fastball with a swing-and-a-miss slider, he limited third-place West (7-4, 6-3) to one hit over six innings.

“He was locked in as soon as he got here,” said Carson catcher Cam Burleyson. “Laser-focused and had all of his pitches working. Hitters came to the box guessing. When that happens, he’s almost impossible to hit.”

“We really didn’t play well tonight,” disappointed coach Seth Graham said, shortly after West committed three errors and had its six-game winning streak snapped. “But Simmerson threw well on the mound and they got hits when they had to. We just made too many mistakes to win.”

Winning coach Chris Cauble felt Simmerson, who struggled early in the season, took another stride forward. “He’s taken baby steps each start,” Cauble said. “His first couple starts weren’t so great, but he kept working. He actually pitched a complete game, all eight innings, and stayed under the pitch count against South Iredell. Now his last three outings have been spot-on. This is what we thought he could do.”

Carson collected 10 hits, eight of them against left-hander Casey Gouge. The Cougars took a 1-0 lead in the last of the first inning when Jake Harris floated a two-out, RBI-single into left field. In the second, Dylan Driver’s line drive to center plated teammate Hunter Burris before Caden Hudson’s base hit loaded the bases with one away. CHS took a 3-0 lead when CP Pyle — one of 10 seniors recognized before the first pitch — dropped down a textbook squeeze bunt to the right side.

“Cauble called it,” said Pyle, a four-year letterman. “I was surprised, but I really wasn’t. I knew he was thinking something crazy.”

Pyle squared on a 1-1 curveball from Gouge and beat a throw to first base. “It was down, so I was able to put it on the ground,” he explained. “I did my job.”

So did the Carson defense behind Simmerson, who issued two walks and hit four batters. In the top of the fourth, WR’s Matt Connolly was robbed of a hit when Carson shortstop Emory Taylor ventured deep in the hole at shortstop, made a dazzling, backhanded grab and fired to first in time for the out. One batter later, Loeblein hoisted a lazy fly ball down the left-field line that third-baseman Hudson hustled under and caught.

Then in the West sixth inning, with the no-hitter still intact, Taylor snared a liner by Gouge that seemed ticketed for left field.

“But the most important defensive player,” Simmerson made it known, “was the guy behind the plate. (Burleyson) stole a bunch of strikes and just showed confidence in me. Anything I wanted to throw, he trusted me to make the pitch.”

West will likely need to win the next week’s NPC tournament to secure an at-large state playoff berth. The Cougars, meanwhile, have set their sights on a league title and will conclude their conference season at South Iredell on Friday.

“We control our own destiny,” Cauble noted. “It’s a good place to be.”

NOTES: West is scheduled to host winless Statesville on Friday. … Simmerson (now 3-2) had six strikeouts while Driver, Hudson and Taylor each contributed two hits. Driver had two of the Cougars’ four stolen bases. … Carson DH Jordan King had the game’s only extra-base hit — a leadoff double in the third inning. … West relief pitcher Steven Smith allowed an unearned run and struck out seven in four innings of work.