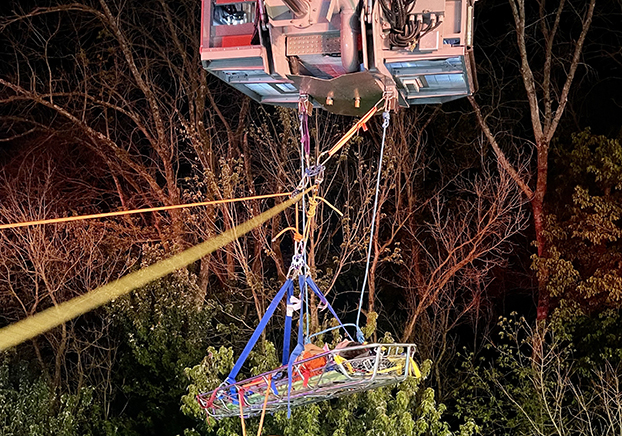 Photo provided by Salisbury and Millers Ferry fire departments- A juvenile boy is hoisted by firefighters after accidentally jumping off of the Yadkin River bridge.

SALISBURY — A juvenile was rescued and airlifted Tuesday after accidentally jumping from Interstate 85’s bridge over the Yadkin River.

The juvenile was alert, conscious and complaining of severe back pain when he was airlifted late Monday to Wake Forest Baptist Medical Center. His condition at the hospital was not clear on Tuesday.

Joseph Leonard of the N.C. Highway Patrol said the juvenile was the passenger in a car stopped in I-85’s southbound lanes because of nearby crashes when he jumped over a concrete barrier to use the bathroom between 10 p.m. and 10:30 p.m. Believing there was flat land immediately on the other side, the juvenile fell several dozen feet, said Millers Ferry Fire Chief Josh Fox.

Fox said two firefighters rappelled down to the juvenile and placed him in a stokes basket, a device used to immobilize and transport injured people, before lifting him up to the bridge. A Novant Health helicopter flew the juvenile to the hospital.

The incident is nearly identical to one that occurred in February 2020, when a 24-year-old Concord man jumped off of Interstate 85 to get out of the way of a speeding tractor-trailer. The man, Jeremiah Cribb, also said he believed there was flat land immediately over the barrier.

Fox said the Yadkin River bridge area is poorly lit and is surrounded by trees until it’s immediately over the water. Because Monday’s incident is the fourth of its kind in the immediate past, he recommended the N.C. Department of Transportation install better lighting or signs noting the drop.

“People don’t realize it when when you go across the bridge, but you’ve got the wood line on both sides until you get to the water,” he said. “When you pull over and see the wood line, you might think there’s land right on the other side.”

In a news release, the Salisbury and Millers Ferry fire departments said the incident highlighted “the need and benefits for the collaborative efforts of the Rowan County Special Operations Task Force, which was established in May 2020. The combined efforts of many rescuers from multiple agencies was again instrumental in a very successful outcome.”

The crash that led to the juvenile’s jump occurred around 9 p.m. Monday when a truck traveling south struck an abandoned vehicle parked on the shoulder. The collision pushed the abandoned vehicle into the road, where it was struck by a few others. A tractor-trailer was among them. Fox said two people were transported to the hospital as a result of the incident. No life-threatening injuries were reported.

Within 40 minutes of the first crash, three cars collided in the northbound lanes, Leonard and Fox said. There were no injuries in that incident.