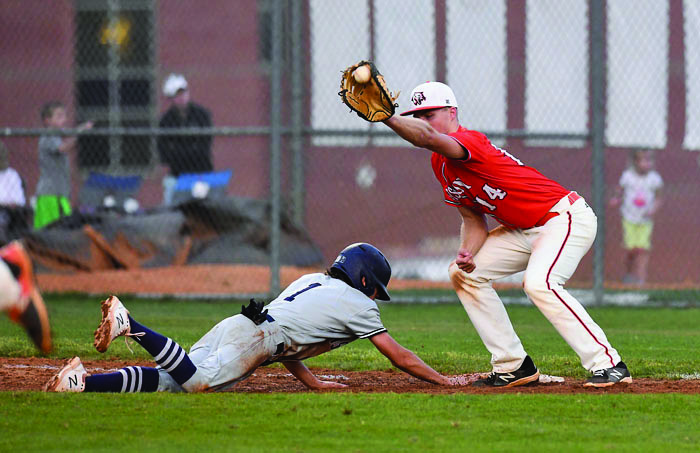 East Rowan’s Cobb Hightower dives back to first as Carson’s Jake Harris covers during a game earlier this season.. photo by Wayne Hinshaw, for the Salisbury Post

This is the final week of the regular season, and East Rowan, West Rowan and Carson enter it the same way they started it on April 27 — dead even.

All three teams have 6-2 records in the North Piedmont Conference. Only the league champion is guaranteed to make the 3A state playoffs.

East has split with West and Carson and swept South Iredell. East isn’t quite sitting in the clubhouse yet, sipping a Cheerwine and watching the leaderboard, but the Mustangs are in great position. They close the regular season at last-place Statesville (tonight) and at fifth-place North Iredell.

North Iredell hasn’t beaten any of the NPC’s top four yet, but it has one of the league’s best pitchers (Cole Johnson) and arguably the league’s best hitter (Ty Staz). Still, you have to like the Mustangs’ chances of finishing 8-2 in the league.

Carson and West Rowan are not going to finish 8-2 in the NPC because they play each other tonight in China Grove.

West Rowan smacked the Cougars by a score of 7-1 in their first meeting this season in Mount Ulla. West also is the hottest team around and hasn’t lost since May 8. The Falcons have won six straight conference games since dropping early tussles to East and to South Iredell.

West sometimes has to scratch and scrape for runs and pulled out 2-1 wins against South Iredell and North Iredell, but the Falcons scored seven runs in their win over East as well as in their win against Carson.

West closes the season at home against winless Statesville on Monday. So, it can throw everything it has against the Cougars, pitching-wise. That means Casey Gouge, Steven Smith and Jake Blevins are all available.

Carson has the toughest grind this week — West tonight, and then a game at fourth-place South Iredell. The Vikings weren’t eliminated from the race until last Wednesday’s loss to East.

Carson won 3-2 in eight innings in the first meeting with South Iredell.

Carson’s pitching staff is mostly Dylan Driver, Hayden Simmerson and Mason Duren. The Cougars have to figure out how to win two tough games.

In 10 overall games, East (8-2) has allowed just 16 earned runs, although that’s 16 more than some expected when this season started.

But the Mustangs pitched about as well as it’s possible to pitch last week, shutting out two good teams.

East pitchers strike out 11.2 batters per game so this is a team with a chance to make big noise in the playoffs.

Cameron Padgett, a junior UNC commit, has been close to flawless on the mound — 19 innings, zero earned runs, 29 strikeouts, one walk.

Like Padgett, Chance Mako, a sophomore committed to N.C. State, is 3-0. Mako owns 36 strikeouts. Senior Jake Hunter, who is headed to East Carolina, hasn’t had the dominant season that was anticipated, but he still is striking out two batters per inning (43 Ks) and has the stuff to shut out anyone in 3A.

Offensively, East doesn’t have anyone with huge RBI numbers, but left fielder Aiden Schenck is batting .464 and just about everyone in the lineup has come through with a big hit.

While MaxPreps rankings mean nothing this season as far as determining who makes the playoffs, they’re still interesting to look at.

East is ranked the highest among Rowan teams, mostly because it had non-conference wins against a powerhouse 2A (North Davidson) and a good 4A (East Forsyth).

East is ranked 12th in 3A, while West is ranked 25th and Carson 35th. Statesville is ranked 102nd out of 104 3A teams, so those games with the Greyhounds hurt the strength of schedule and the MaxPreps ranking.

Six 3A teams are still undefeated, with perennially strong Crest ranked No. 1 at this point.

On a statewide scale, 2A South Rowan has a comparable MaxPreps ranking to the three Rowan powers in the NPC. Statewide, East is 54th, West 120th, South 148th and Carson 154th.

South will be moving up to 3A to rejoin East, West and Carson as a league rival during the 2021-22 school year. That will make things even more exciting in a lot of sports, but especially in baseball.

The top three in the 10-team Central Carolina Conference will make it, and South is certain to be one of those three if it wins at Salisbury tonight on what will be senior night for the Hornets (5-4, 4-4).

Even if South were to be upset by Salisbury, the Raiders still will make the playoffs if Ledford loses to North Davidson on Friday.

South and Ledford are tied for third, but the Raiders earned the tiebreaker by blasting Ledford 14-3 last Thursday.

North Rowan hasn’t won a game yet, but the Cavaliers (0-7) have managed to play the schedule when it didn’t appear in mid-April that they’d be able to field a team.

North has its best chance for a win on Monday, June 7, when it hosts South Davidson (0-9).

High school baseball: South wins a big one over…