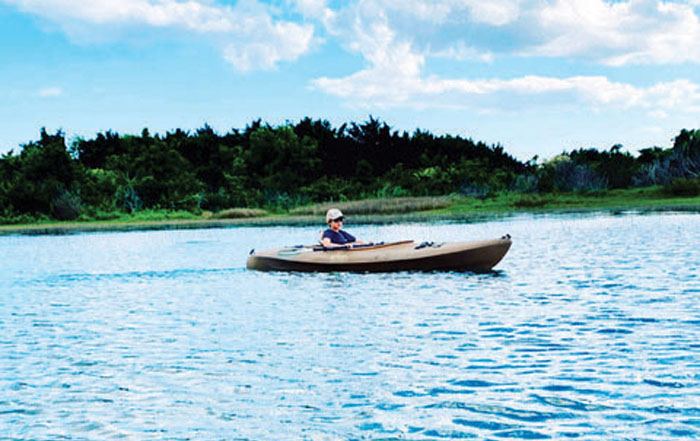 Kristy Woodson Harvey’s son, Will, in his kayak. Submitted photo

My son was born loving the water, wanting to be on it, in it, near it. I have always believed it is a genetic trait, something passed on from his father and grandfather, who are also most at home on the sea. They feel the water in much the way that I feel words, understand it on an elemental level that eludes me.

I was a little girl who had to take five showers a day at the beach because she couldn’t stand the feel of the sand. I am a woman who thinks the water is inspiring but is still fairly terrified of it. I understand intellectually the changing of the tides and the pull of the moon. My husband and son know it somewhere deep inside themselves.

And that is, precisely why, when it’s time for a water adventure, my son Will asks his dad. I’m always happy to tag along, but let’s just say that I am not who you want on your boat when the seas turn rough. But, last week, my husband was still at work when Will said, “Hey, Mom. Want to go kayaking?”

It was a little windy for my liking, but I said, “Sure,” all the same. Because I am the mom who does homework and carpool and bedtime. And, every now and then, I want a taste of what it feels like to be the fun parent.

“You’ll help me, right?” I asked, half joking, as we walked down the dock.

“Mom,” he said back. “I’ll teach you everything you need to know.”

We paddled across the waterway to the Rachel Carson Reserve and pulled our kayaks up onto the sandy beach. I followed Will from the shoreline to the path that cuts between the marsh grass, avoiding stepping on hundreds of fiddler crabs.

One of the most awe-inspiring parts of this island is the wild horses that roam free on it. When they run — especially through the water — the sheer power of them is breathtaking. The evidence of horses was everywhere, and I realized we were alone on an island with those wild animals. “Um, buddy,” I called to Will’s back. “Should we be worried about the horses?”

He paused and looked at me. “Mom, I promise you, they’re more scared of you than you are of them.”

I doubted that very highly.

But then he gave me the first lesson of the day: “Mom, you can’t be scared on an adventure.”

And that, in a nutshell, is the difference between the two of us. I let my worry get in the way. Will chooses the adventure.

So I followed him through the brush, winding through cacti I didn’t know existed in our part of North Carolina and even a few native palm trees, back to a clear, calm pond.

Will’s favorite thing to do is fish. It has lent him not only an obscene amount of patience and the ability to tie flies so beautiful I want to wear them as earrings, but also an understanding of nature. He can read ripples on the water, knows that where birds are, fish are. So, as we stood by that pond, Will was completely and totally still, watching. An ibis was stalking something in the water and kept creeping closer and closer to my son. I was in awe of the fact that Will could have reached his hand out and touched this majestic bird, but he was completely unsurprised. Because, if you are still, the good things come to you.

That is not something I excel at, but I know it to be true. As the bird took off toward its dinner, Will pointed at what he had been studying. In the clear, shallow water, a crab inched along. “He’s a blue crab,” Will said, then amended, “No, she.”

He grinned up at me. “Because she has pink on the end of her claw.”

I peered down and, watching the crab intently, realized that he was right. She did, in fact, have pink on her claw, but I never would have studied her long enough to realize it. That’s when it occurred to me: Meditation isn’t something that only happens on an app.

I find that quiet place inside me via Deepak Chopra’s voice on my iPhone. Will finds it here. I hope my son never has to repeat mantras and count breaths. I hope these birds and fish and waves and sunlight always help him to find that calm center at his core.

We returned to our kayaks, and, a few minutes later, dark clouds appeared. Taylor Creek, which we needed to cross before we got home, isn’t busy during the week, and it isn’t terribly wide. But I could already see that the whipping wind and changing current were going to make crossing a challenge. After a few minutes of paddling furiously, I realized I was getting basically nowhere. I called to Will, “Let’s pull up at the dinghy dock.” It was a few docks closer, and, well, my arms were burning, and I was almost there.

He called back: “Mom, just paddle toward the shoal marker. The current will carry you in.”

I rolled my eyes. Right. Like changing the direction of the nose of my kayak by a foot was going to get me out of this mess. But then, well… It did, bringing us to the dock at the perfect high tide.

Sometimes I try too hard. I am aware, on a deep level that the greatest things are never meant to be a struggle. But I have to be reminded over and over again: When we surrender to the current, it will usually carry us where we need to go.

As we climbed up on the dock, Will said, “Thanks for taking me, Mom. You did a great job.” And, while I have to laugh at this now, at the time I kind of agreed with him. I went on an adventure and did not turn around because of monster horses that could trample me or because of what I am 100% sure were bear tracks. I braved mushy sand that gives me the creeps and tons of mosquitoes and an almost-storm. And, well, I had a really great time. But what Will reminded me is: Never be stingy with praise.

It takes so little effort to pay someone a compliment, when it is sincere, and it just might make their day. In this case, it ensured that next time Will wants to go kayaking, I’ll say yes right away.

As a mother, I spend so much time thinking about the things I want to instill in my son, about what I want to teach him. But what he reminded me last week is that some people learn by listening. Others, like him, learn by watching. And so maybe it really is the example we set that matters most.

I might never be able to feel the water deep in my veins my like my husband and son do. But every time I’m on it, still and patient, watching and listening, I get just a little bit closer. And that, I have to think, is a lesson in itself.

Kristy Woodson Harvey is a Salisbury native and the USA Today bestselling author of seven novels. Copies of her new release, “Under the Southern Sky,” are available from South Main Book Company.