GOLD HILL — In the midst of the pandemic last spring, Melissa and Drew Hammill wanted to give local graduates something joyous.

On the side of the refurbished barn overlooking the fields of flowers by their home, the couple painted a mural congratulating 2020 graduates with a quote from the Avett Brothers band that reads: “Decide what to be and go be it.”

The quote is one of Melissa’s favorites, and one that she and Drew followed two years ago when they left Charlotte and purchased a farmhouse in Gold Hill. Soon after moving in, they turned the fields around their home into rows of flowers and started the Gold Hill Flower Company.

The celebratory mural was also a passion project for Melissa, who studied art at the University of North Carolina in Charlotte and still teaches classes from time to time.

Like moths to a flame, the mural attracted graduates, families and travelers who took pictures in front of the quote.

“People were coming from Raleigh to take pictures,” Melissa said. “… I was amazed at the amount of people who came to take pictures from places like Charlotte and further out.”

With the success of last year’s mural, Melissa and Drew decided to paint another one this spring. The new mural, which was completed recently, features a North Carolina inspired butterfly, several lines of script bordered by pine cones and two golden banners with “Gold Hill” and “North Carolina” written on them.

The couple’s canvas was the side of the unassuming building next door. Needing a place for their business and flower workshops, the two began leasing the historic building last year.

Although it is old, it’s not just any building. In its past life, the building was a Texaco gas station located on N.C. 52. It’s where Drew’s great-grandfather once worked and it’s where his parents met for the first time. About 20 years ago, the entire building was moved to its current home at 860 St. Stephens Church Road.

Now, the building is where Melissa and Drew run their flower business, and where they painted a mural together.

“It makes me feel like I’m in the right place,” Melissa said. “It was a full circle moment, like you’re where you belong. It’s definitely a cool story we like to tell people.” 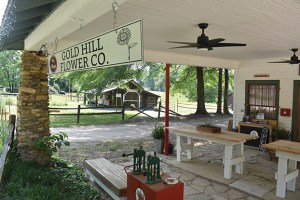 Gold Hill Flower Company is located in an old Texaco gas station that was moved from Highway 52 decades ago. Ben Stansell/Salisbury Post

The new mural has special meaning to the couple as well. Painted under a golden Gold Hill banner is the last line of North Carolina’s official state toast, which was adopted by the General Assembly in 1957.

“This last line was something I said at our wedding,” Drew said. “We always liked it and I thought it was kind of a neat line where people can come out and if they want to get their pictures taken in front of it.”

North Carolina, Drew likes to point out, is the only state in the country with a toast.

Painted on the right side of the mural, under the part of the golden banner that reads “North Carolina” is an eastern tiger swallowtail. Not only is it the state’s official butterfly, but thanks to Melissa’s painting, it’s imprinted with the state’s flag.

“When I was planning the mural, I wanted something that I see a lot of different cities do, which is to put angel wings or butterflies on the side of buildings and make it an interactive thing that people can stand in front of,” Melissa said. “I thought it’d be cool to blend the flag with the state butterfly.”

After starting the painting process in February, the butterfly was the first part Melissa completed. Even when the rest of the mural wasn’t finished, she saw many people already taking pictures in front of it exactly how she envisioned.

The mural was completed over the course of two months in the little spare time the couple had at the end of the day or on the weekends. Melissa is a program coordinator for Central Piedmont Community College and Drew works full-time from the couple’s home.

The rest of the couple’s waking hours are typically consumed by caring for the 20 or so varieties of flowers currently growing on their small farm. Melissa’s passion for growing flowers started in their Charlotte home several years ago. They didn’t fully bloom until the Hammills moved out of the city.

Being able to grow flowers on the land was one of the primary reasons why the couple moved to Gold Hill to begin with.

“(Melissa) does a lot of crafts and I like to work in the yard, so it was a natural fit,” Drew said. “We thought it’d be a good way to raise our daughter to be interested in the science of flowers and the environment and doing something more natural, not on a computer and not in a cubicle.”

Growing and selling flowers also gives the couple an excuse to meet new people and provide strangers with a little happiness.

“Flowers bring a lot of joy to people, I think,” Drew said. “It’s fun being able to meet people out here who are locals, or folks who drive from Charlotte to come out here to the area.”

During peak season, Gold Hill Flower Company offers a “you pick” option that gives people a chance to visit the farm on the weekends, pick their own flowers and make their own bouquets.

Bouquets made of flowers hand picked and arranged by Melissa are also sold daily at a self-service stand under the awning of the former Texaco gas station.

“The goal is, not that we have a business model, but we try to provide people with an opportunity to make it casual,” Drew said. “You need something for your girlfriend or are going to an event, you can come check us out and we’ll do it at a price point that’s probably much cheaper than getting the stuff in Charlotte.” 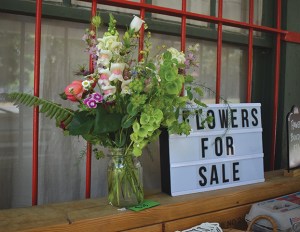 In addition to the flowers, which can be paid for by sticking a few bills in a cash box or electronically through Venmo, the couple has Gold Hill Flower Company stickers for sale at the stand. There were stickers of the butterfly painted on the mural, but those sold out almost instantly.

“One of my friends who owns a shop in (Gold Hill) even asked me when I was getting more stickers,” Melissa said. “She said ‘I have all of these sticker stalkers who are asking me where they can get a (butterfly) sticker.’”

Good news for the “sticker stalkers” — Melissa has already put in an order for more.

In the meantime, people are welcome to visit the mural anytime. Many already have.

Gold Hill Flower Company is located at 860 St. Stephens Church Road. Its facebook page can be found at https://www.facebook.com/goldhillflowerco/.