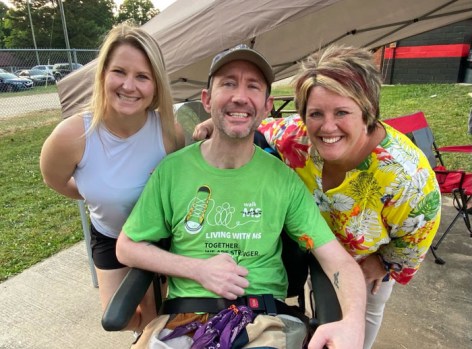 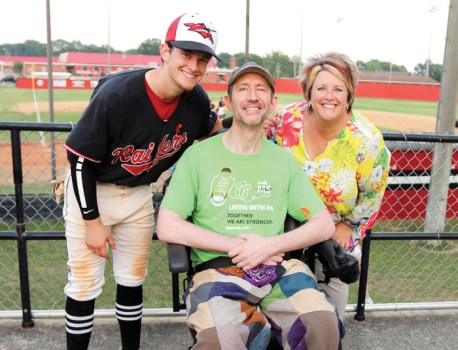 Jack Weaver with Justin Smart and April Weaver. Justin and April got to know each other through the local multiple sclerosis support group, which typically meets at the Hurley Y. The group has been on pause during COVID. Photo by Cindy Martin, for the Salisbury Post 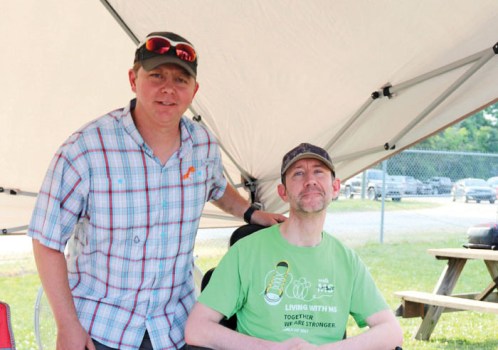 James Ward and Justin Smart. Photo by Cindy Martin, for the Salisbury Post 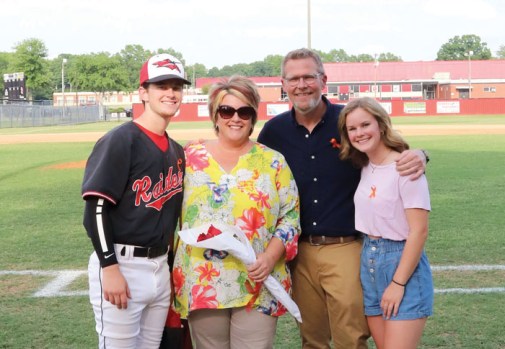 Senior Jack Weaver with his parents, April and Jonathan, and his younger sister, Audrey. Photo by Cindy Martin, for the Salisbury Post 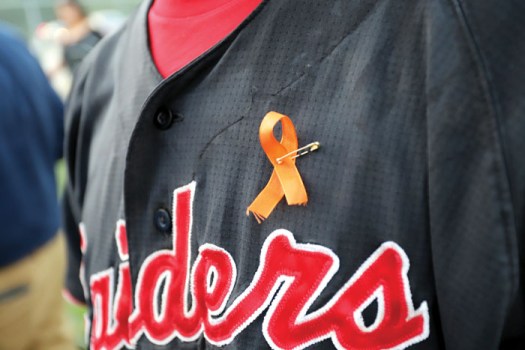 The Raider players wore orange ribbons during the final baseball game of the season. Photo by Cindy Martin, for the Salisbury Post 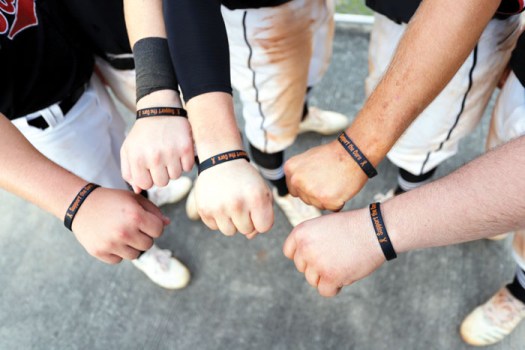 The seniors show off their MS bracelets they received from the Weaver family. Photo by Cindy Martin, for the Salisbury Post 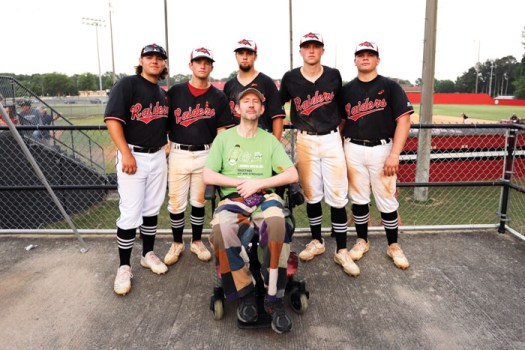 Jack Weaver, 18, has played baseball pretty much all his life. The third baseman’s last game of his high school career was Tuesday evening at South Rowan High School.

But sports wasn’t the most important thing on his mind. Instead, Jack, who will play baseball this fall at Surry Community College in Dobson, chose to honor his mother, April, and their friends, Justin Smart and Reagon Falk. All are tenacious fighters in the war on multiple sclerosis.

The team’s five seniors were recognized at the start of the game, but the spotlight was on April, Justin and Reagon at the beginning of the third inning.

Here’s what the announcer had to say about multiple sclerosis. Jack’s dad, Jonathan, pulled together some facts about MS, and added a personal note at the end from Jack and his younger sister Audrey, a rising junior at South.

First, thanks so much for joining us at South Rowan for senior night 2021.

Tonight, we also honor those who live with multiple sclerosis, also known as MS.

MS is a chronic, sometimes disabling disease that damages the central nervous system.

Worldwide, more than 2.3 million people are affected by the disease. We have a few of those MS warriors here with us tonight. April Weaver, mother of Raiders’ third baseman Jack Weaver, is here, along with her friends Justin Smart and Reagon Falk. We’re so glad to have you all here tonight.

You may also notice the Raiders wearing orange ribbons to show support for all those who live with what many call “the invisible disease.”

If you haven’t yet, consider participating in the 50-50 raffle. All proceeds go to the Multiple Sclerosis Foundation.

Now, here’s a message from Jack and Audrey Weaver.

Mom, we look up to you for many things, but mainly for how strong you are through everything life throws your way. Thank you for showing us how to be tough in the face of adversity. You inspire us every day by being the bravest, strongest woman we know.

We pray for good health for you and for all who live with this disease. Love always, Jack and Audrey.

“It was just a good, welcoming thing for people who have MS,” Jack said Wednesday of the event. “I was happy Justin was there, and you can see the effects the disease has had on him.”

April, who’s in her 26th year of teaching, feels lucky that she is still able to walk. A lot of people don’t even know she has MS. She takes an infusion every six months, and meets with a physical therapist once a week.

The biggest hurdle MS patients face this time of year is the heat, her son said. “We’ve tried to be more cautious about her. Sometimes she isn’t in a good mood, but I can’t be upset about it.”

MS or no MS, April has come to all of his ballgames, even in the summer heat. Even though it saps her energy.

“I just thought since it was my senior year, I should do something for her,” Jack said. “With baseball, she’s always been there for me. This was a way of showing I care. I wish I could stay after I graduate and help.”

But that’s not how it works. We raise our children and then they graduate and leave the nest. And after all, Dobson is only 1 1/2 hours a way, pretty much a straight shot from the family’s home in western Rowan County.

And April will continue teaching third-graders at Millbridge Elementary School, a job she dearly loves. She admits that MS makes her job harder, but she is determined to reach the 30-year milestone.

“I love it so much,” she said of her career. “It totally keeps me going.”

Her mother, Mary Ann Froriep, recently moved to the area to help out.

Jonathan said that his sister-in-law works for a retina specialist, and it was he who mentioned that April may have MS.

Of the diagnosis, Jonathan said, “It was a little bit of disbelief and a whole lot of not understanding what it meant. I’d heard of the Walk for MS, but I didn’t really know what it was. We became educated really quick. We had to step back and learn what it was all about, and we didn’t know what to expect.”

Jonathan and April now see a neurologist, and he said that while the physician doesn’t sugar coat any information, “she also gives us hope.”

April is also part of an MS support group that meets at the Hurley Y. That’s how she got to know Justin.

Not only was Justin in attendance with his wife, Candice Basinger, Justin’s best friend, James Ward, came from Fayetteville to surprise him. James’ niece dates one of the senior players, another connection.

“It’s amazing with school and life being interrupted these wonderful players think to raise money and awareness for MS,” Justin said Wednesday. “I felt honored to be invited.”

“I really appreciate all those who were involved in setting this up and the accommodations that were made so that Justin could attend,” Candice said Wednesday. “We got to see friends and family, make new friends, watch a baseball game, and help in the fight against MS. We had a great time!”

Jonathan added, “We’d love to give a big thanks to South Rowan Athletic Director Angie Chrismon for her help in organizing the night. Doing so on senior night was a feat, and she was instrumental in making it happen.”