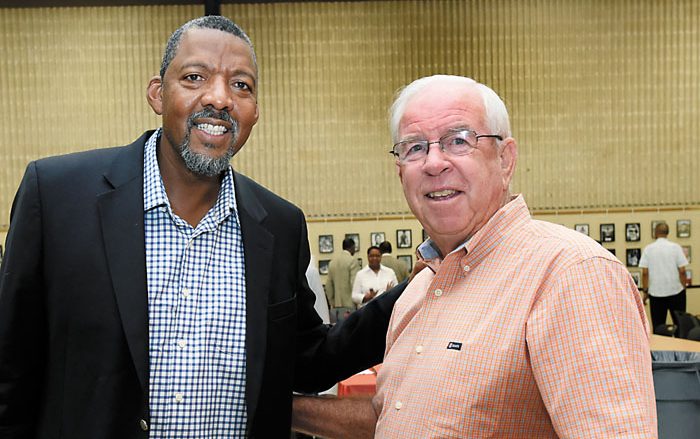 SALISBURY — It all goes by fast.

It’s been more than 56 years since Sam Gealy and his N.C. State Wolfpack basketball teammates lifted fading coach Everett Case from his wheelchair to cut the last strand of the netting from the 1965 ACC Tournament final victory over Duke.

N.C. State went into that 1964-65 season praying it could break even at 10-10. Duke was coming off a national runner-up season.

His health failing, Case retired two games into that season and was replaced by towel-chewing assistant Press Maravich, who turned the Wolfpack into a manic, pressing team. It worked. The players played like demons. They badly wanted to win for Case, an Indiana native who had come to N.C. State in 1947.

That 91-85 championship triumph on the Pack’s home floor at Reynolds Coliseum is considered a classic moment, partly because if was the last public appearance by Case, who would pass away in the spring of 1966. The game also stands out in an era when every ACC tourney game was life-and-death because N.C. State reserve Larry Worsley torched the Blue Devils with 30 points on jumpers from the corners. Worsley accepted the first Everett Case Award as tourney MVP.

Gealy’s impact off the bench wasn’t quite as incredible as Worsley’s. He played five scoreless minutes that night against the eight-ranked Blue Devils, but those five minutes provided a lifetime of stories and memories, as well as a championship ring that’s still a standard part of his wardrobe.

And now Gealy, 76, who has been Catawba’s golf coach since the late 1990s, has announced his retirement. He’s basically coached since he finished his playing career at N.C. State in 1967. He’s made an impact on Rowan County athletics for more than 40 years, starting when he took the reins of the North Rowan boys basketball program for the 1977-78 season.

Case found Gealy, a 6-foot-guard, at Neshannock High School In New Castle, Pa. That was hard-working steel country, about an hour north of Pittsburgh. Gealy scored 1,142 points on the hardwood from 1959-62. One of Gealy’s county rivals, Wampum’s Rich Allen, was two years older and would score 1,931 points before he went on to hit 351 homers, some of them of mind-boggling distance, in the major leagues.

Gealy also excelled in golf in high school, finishing as state runner-up his senior year. Case assured him the Wolfpack also would give him an opportunity to help the golf team.

Gealy’s college basketball career didn’t blossom as much as he’d hoped, but it was an honor to be recruited by Case, who got big-time basketball started On Tobacco Road. North Carolina,which brought in coach Frank McGuire, and Duke, which hired Case disciple Vic Bubas, escalated and elevated their programs in an attempt to keep up with Case’s Wolfpack.

Gealy earned substantial playing time for Coach Maravich with the 1965-66 Wolfpack, averaging 2.4 points for an 18-9 team that wasn’t legendary, but finished second to a powerful Duke team in the ACC regular season and tournament. Gealy came off the bench at either guard spot.

Preseason publications regarded Gealy as a potential starter for the 1966-67 season, but new Wolfpack coach Norman Sloan declined. He opted to go with youngsters Dick Braucher and Nick Trifunovich in what turned out to be a disastrous 7-19 campaign.

Gealy made a greater impact on Wolfpack golf team, finishing ninth in the ACC Championships in 1966.

Gealy began his coaching and teaching career at Bunn High, northeast of Raleigh, where he was involved with football as well as golf and basketball.

Then he coached North Rowan basketball for three seasons, including a 20-6 season with a Christmas tournament championship. That was in 1978-79.

After a stint back in Raleigh at Cardinal Gibbons, he returned to Rowan County as a coach at Salisbury High.

Gealy’s second and third Salisbury basketball teams were among the best in county history. They had back-to-back 30-2 seasons in 1986-87 and 1987-88. The 1986-87 team, with players such as Bryan Withers, Warren Alexander, Fred Campbell and Donald Jenkins, won the 2A state championship.

Gealy would coach Salisbury’s all-time leading basketball scorer for males, Bobby Phillips, Southern Conference Player of the Year during his time at Western Carolina, and Bobby Jackson, an NBA first-round draft pick in 1997 and the 2003 NBA Sixth Man of the Year.

In May 1989, Gealy was named to follow Bob Pharr as Salisbury’s athletic director. When he stepped down, Pharr had guided Salisbury to a place as the state’s top 2A athletic school, with three straight Wachovia Cups.

In the summer of 1998, Gealy announced his retirement from high school coaching. It was time to slow down a bit, and he replaced Chip Hester as Catawba’s men’s golf coach. He would also take charge of the Catawba women’s team, which was debuting in the 1999-2000 school year.

He taught life lessons as well as swings, the most important of them being that after a shot has been hit, there’s no use worrying about it. Move on to the next one.

Gealy’s wife, Judy, a retired math teacher, was there for the entire journey.  The Gealys celebrated their 50th wedding anniversary in 2017.

Elliot Gealy, who played at Clemson, is now the director of men’s and women’s golf at Lenoir-Rhyne.

In 2004, Sam Gealy was honored with induction into his hometown Sports Hall of Fame back in Lawrence County, Pa., where he joined, among others; Allen, Cooperstown slugger Hack Wilson , long-time MLB manager Chuck Tanner and NFL head coach Bill McPeak.

In 2008, Gealy was inducted into the Salisbury-Rowan Hall of Fame.

In 2015, the Wolfpack honored the surviving members of the legendary team that had won the ACC tournament 50 years earlier, and Gealy stood again with his teammates in the spotlight in Raleigh.

Gealy was the only one of those Wolfpack basketball players who became a long-term high school coach.

It was a decision that Gealy traced back to the influence his own high school coach, a man named Don Black.

It was a decision that impacted a lot of young lives in Rowan County for the better.