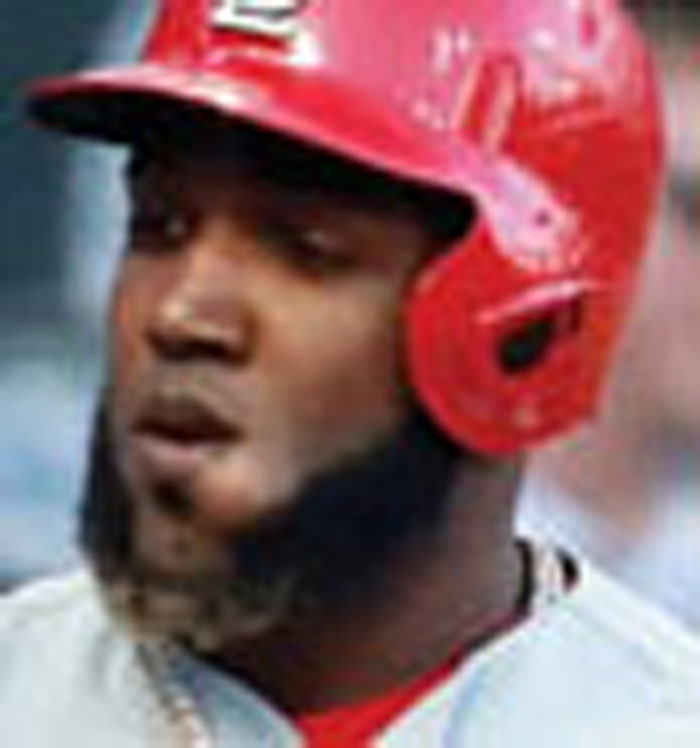 Ozuna was charged with aggravated assault strangulation and misdemeanor battery/family violence, according to Fulton County Jail records in Georgia. The 30-year-old outfielder was booked Saturday by the Sandy Springs Police Department, and an apparent photo of his arrest was posted by a user on Twitter.

Major League Baseball’s Department of Investigations plans to review the matter under the joint domestic violence policy in place between MLB and the players association.

Ozuna, who led the NL with 18 homers last year, was placed on the injured list Friday by the Braves with two dislocated fingers on his left hand. He re-signed with Atlanta in February on a $65 million, four-year deal.

Brandon Drury and Billy McKinney piled on with homers during the Mets’ seven-run sixth inning. McKinney was playing his third game for New York after being acquired this week from Milwaukee.
Lindor connected in the seventh, his fourth homer since being traded by Cleveland in January and signing a $341 million, 10-year deal with New York.

Lindor raised his batting average to .191 with two hits, snapping a 1-for-17 slide. Booed frequently at Citi Field this month, he said before the game he understood fan frustrations and was working fervently to fix his swing.

Walker (4-1) had been out since May 17 with left side tightness but returned in top form, striking out eight while allowing two hits and a walk. The right-hander threw 80 pitches and slimmed his ERA to 1.84 over nine starts since signing a a $23 million, three-year contract with the Mets as a free agent.
NL East-leading New York has won four straight despite having 16 players on the injured list, improving to 25-20. The Mets had 13 hits and topped three homers in a game for the first time this year.

Atlanta dropped to 24-26. The Braves haven’t had a winning record all season.

After Friday’s series opener was postponed by rain, the skies cleared in time Saturday for the teams to play on a soggy but manageable field. The temperature at first pitch was 51 degrees, and showers forecast throughout the weekend held off long enough for the clubs to get the game in.

Braves starter Ian Anderson (4-2) allowed four runs in four innings. The 23-year-old from Clifton Park, New York, was trying to become the first Empire State native to beat the Mets and Yankees on the road in the same season. He won in the Bronx on April 21.

Anderson opened the first inning by striking out Villar and Lindor before McCann socked his solo shot the opposite way to right field. McCann had four hits and lifted his average from .197 to .221.
New York loaded the bases in the second but came up empty when Villar’s two-out drive was caught on the warning track in right.

Dominic Smith’s RBI single in the third made it 2-0 before Villar led off the fifth with a homer.

Braves: RHP Mike Soroka (torn right Achilles tendon) will be re-evaluated in two weeks before Atlanta decides whether he might return this season.

Mets: 1B Pete Alonso (right hand sprain) planned to ramp up baseball activities Saturday and Sunday, and the Mets are hoping he won’t need a rehab assignment before returning. … OF Kevin Pillar (broken nose) is healing ahead of schedule and has resumed some baseball activities. Manager Luis Rojas said Pillar might need to wear a protective face shield in the outfield when he returns. … New York hopes to activate RHP Seth Lugo (right elbow surgery) on Monday, pending results of his scheduled minor league rehab appearance Saturday.

Mets ace Jacob deGrom (3-2, 0.80 ERA) is set Sunday night for his second start since an IL stint due to right side tightness. The Braves plan to pitch LHP Max Fried (2-2, 4.63), though rain is in the forecast all day.