Local equine rescue in search of new home for horses 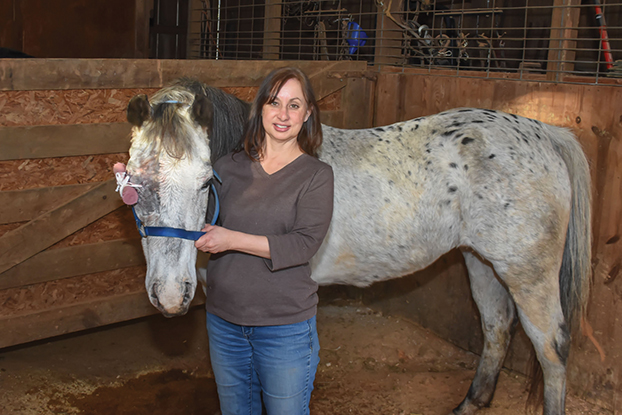 SALISBURY — With its current home soon to be sold, Midnight’s Promise Equine Rescue is in search of greener pastures.

The nonprofit horse rescue was founded in late 2015 by a local group led by Deborah Baker and has evolved into a full-service rescue that currently provides rehabilitation services to nine horses. The majority of horses at the rescue were either abandoned or saved from slaughter.

“We try to help the community in any way that’s related to horses in as many ways as we can,” Baker said. “We do rescue horses, but we also work on emergency response, education and we also have therapeutic support for older citizens.”

Launching Midnight’s Promise Equine Rescue was the fulfillment of a lifelong dream for Baker, who’d been obsessed with horses since she had a chance encounter with one when she was a child.

“When I was a little kid playing in the street before sunset in Charlotte, I remember a horse coming toward me from the setting sun,” Baker said. “It was like getting struck by lightning. The horse passed me before I knew what had happened. From that moment on, I was just horse crazy.”

Baker’s passion for ponies was so strong that her mother eventually prohibited her from reading any more books about horses, for fear that she wouldn’t know anything else.

Baker’s love of horses stuck with her into adulthood, but she didn’t pursue it fully until moving to Rowan County in the early 2000s after spending a decade teaching English in Japan.

When Baker and friends started Midnight’s Promise Equine Rescue a half-decade ago, they didn’t have any land or any horses. The group fundraised and donated supplies to Rowan County Animal Control to help it care for horses that’d been seized or abandoned. 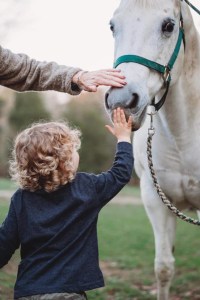 Miakoda, a horse cared for by Midnight’s Promise Equine Rescue, receives a tender petting from a child. Photo submitted.

While delivering supplies to Rowan County Animal Control one day, Baker struck up a conversation with one of the staff members. Just a few hours later, the agent called Baker and told her she’d met someone who might be interested in hosting the rescue.

“It was like it was meant to be,” Baker said.

In early 2016, Midnight’s Promise moved onto a lush farm owned by the Perry family located near Interstate 85.

The property, which features a large red barn and lots of shady nooks for hot summer days, was exactly what the rescue needed.

“This facility has over 20 acres of nice pasture, which is great because then we don’t have to buy hay during the summer and spring,” Baker said. “There’s room for the horses to move around, rehabilitate. There’s plenty of room to separate horses into groups.”

The Perrys, she said, always had intentions of eventually selling the land. So, it was not a shock when they eventually did. But knowing the moment was coming hasn’t made the transition any easier for Baker.

“It breaks my heart to have to move,” Baker said. “It’s such a beautiful farm. It’s been my home. I’m a realist. I’m practical and I understand things have had to change.”

Nonetheless, Baker said she’s extremely grateful for the time the rescue has spent there.

“We pay rent, but (the Perrys) have been very kind and wonderful people to work with and they’ve become good friends,” Baker said.

The move comes after a challenging year for Midnight’s Promise. Due to COVID-19, Baker said the organization wasn’t able to host many of its typical fundraising events last year. Fundraising and donations are the rescue’s only source of income. The pandemic also made it hard for the rescue to find volunteers.

“The last year has been hard for us, just like it has been for a lot of small businesses,” Baker said.

Midnight’s Promise Equine Rescue has until August to find a new home. Baker is already on the hunt. The ideal place, she said, would have at least 15 acres of pasture, road access and a barn suitable for about 10 horses with electricity and water.

Baker’s preference is to find a place in Rowan County and, if possible, close to China Grove.

“I want to stay in Rowan County, I really do. It’s where I live,” Baker said. “Depending on what’s going on, if I have a horse that’s really sick, I may have to come out here three to four times a day. That’s pretty common.”

If the rescue isn’t able to find a new home by August, Baker said she’ll be able to find temporary foster homes for the nine horses currently under her care.

Moving to a new home shouldn’t be too difficult of a transition for most of the horses. The only horse Baker is somewhat worried about is Buck, an almost 40-year old horse who was born on the farm.

To ensure Buck has a smooth transition to wherever the rescue’s new home will be, Baker said she’ll keep the two other horses he’s closest with near him all the time.

More information about Midnight’s Promise Equine Rescue can be found at midnightspromise.org/miakoda or by calling 704-798-6641.