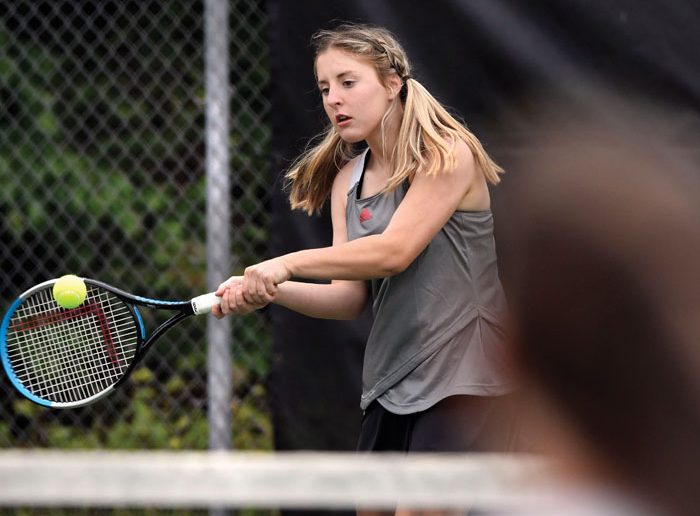 SALISBURY — Salisbury girls tennis coach Milton Griffith was complimentary after a big road victory and said Carson was definitely the strongest team his girls have faced.

Salisbury still won 8-1 on Thursday in a non-conference matchup of unbeaten squads, which says a lot about how good the Hornets are this year.

“Carson has a very good  team — we play some good teams in our league ( the 2A Central Carolina Conference), but I believe Carson would beat Oak Grove 8-1,” Griffith said. “This wasn’t one of those quick matches, where we’re in and out. This was a long, hard match. Carson played. We played. Our girls were very good today, even with pretty terrible heat.”

The sizzling weather probably cost Salisbury a 9-0 sweep. Sophomore Kate Burton was on her way to winning a close match at No. 5 singles, up 6-4, 3-2, when she collapsed from the heat. She had to default to Carson senior Alison Sloop, who remained undefeated.

“A really good match at 2 and the girl at 6 for Carson was a brick wall,” Griffith said. “The ball just kept coming back.”

It was the first singles loss of the season for both Perry and Whittington.

Salisbury’s Lillie Rusher, who made All-State in soccer this week, plays No. 1 for the Hornets. She won 6-0, 6-1 against Carson’s Lindsey Conrad in another matchup of seniors. Rusher’s only loss this season has been to Oak Grove phenom Jessica Fuchs.

Carson’s strong suit is doubles, but Salisbury won those matches, as well.

Rusher teamed with Meredith Burton for an 8-3 win at No. 1 doubles over Conrad and Carleigh Perry. Rusher/Burton is an undefeated doubles team. The Conrad/Perry team is now 7-2.

The team of Campion and Wymbs prevailed 8-2, handing Carson’s Isley and Sloop their first loss of the season at No. 2 doubles.

At No. 3 doubles, Ellison Frick stepped in for Kate Burton. Frick teamed with Lawson for an 8-5 victory against the unit of Colbie Perry and Whittington.

COVID shortened this tennis season and eliminated the dual team playoffs entirely, so Thursday’s matchup was one of the dates both teams had circled on the calendar.

“Not having dual team is unfortunate because most definitely we have a team that had a chance,” Griffith said. “Not having playoffs has made us target things differently. These girls have been deprived of a lot of things, but  we’ve kept everything postive. We’ve focused more than usual on getting the girls ready for the individual regionals, and hopefully, the state.”

The seniors on both teams will be graduating Saturday.

Salisbury’s Senior Day is set for June 2 when the Hornets take on South Rowan.

“Lillie and Meredith will be alumnae when we play that one,” Griffith said.

Senior Day is June 1 when the Cougars take on West Rowan. On June 4, Carson (8-1) will be playing at South Iredell in a key match that will determine if the Cougars are outright champs or co-champs in the North Piedmont Conference.