Jemall Dewanne Cuthbertson, 43, of Woodleaf, and Joshua Eddie Lee Mays, 35, have both been charged with affray (fighting) for their roles in the incident. Cuthbertson was also charged with assault with a deadly weapon and reckless driving. Cuthbertson was issued a $1,000 secure bond and was booked into the Rowan County Detention Center. Mays hasn’t yet been served with a warrant for the charge. 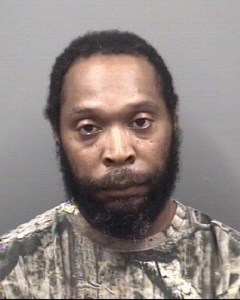 The charges stem from an incident that appears to have started with a domestic dispute at the 100 block of T Myers Drive, according to the Rowan Sheriff’s Office. A woman visited Cuthbertson’s residence with her 14-year old son to retrieve some belongings. After Cuthbertson allegedly became violent at the residence, the female fled to the parking lot of the Dollar General at 8790 Woodleaf Road. Mays arrived at the Dollar General, and he and Cuthbertson fought, according to the Rowan Sheriff’s Office.

Rowan Sheriff’s Office deputies were dispatched to the location after a 911 call reported the fight.

Following the fight, Mays drove the woman and her son to a residence on Cone Drive and dropped them off, according to the Rowan Sheriff’s Office. As he was driving away, Mays claimed he was pursued by Cuthbertson. Mays drove around the Woodleaf Fire Department, with Cuthbertson following, and eventually drove back to Cone Drive, where several shots were allegedly fired by both men.

Cuthbertson appeared to be uninjured after the incident while Mays had minor lacerations on his elbows and knees.

The incident remains under investigation by the Rowan County Sheriff’s Department.

• A suspect on Thursday night stole a case of beer from the Rushco Food Store at 2480 Statesville Blvd. The suspect ran into the store, took two cases of beer from the cooler and ran out of the store with them. The suspect dropped one of the beer cases while fleeing. A Ruscho employee chased the suspect out of the store and ran behind his gray sedan. The suspect backed the vehicle up, striking the employee and drove off. The employee sustained a laceration to their arm, but was largely unharmed. The suspect is described as a 5-foot-5-inch Black male weighing approximately 120-130 pounds. He was wearing a white hoodie. The incident is still under investigation.

• Edwin Bombo, 51, was charged Thursday with assault on a female by a male over 18.

• Quadry Denaro Johnson, 29, was charged Thursday with possession of a schedule one controlled substance.

• Omar Amezquia Carapia, 19, was charged Thursday with larceny by servants and other employees.

• A woman was the victim of a physical assault in the 500 block of E. Lafayette St. early Thursday morning.

• A man was the victim of assault with a gun in the 400 block of Jackson Road on Wednesday. Detectives investigating the shooting found eight 45-caliber casings in the victim’s driveway. The victim was uninjured.