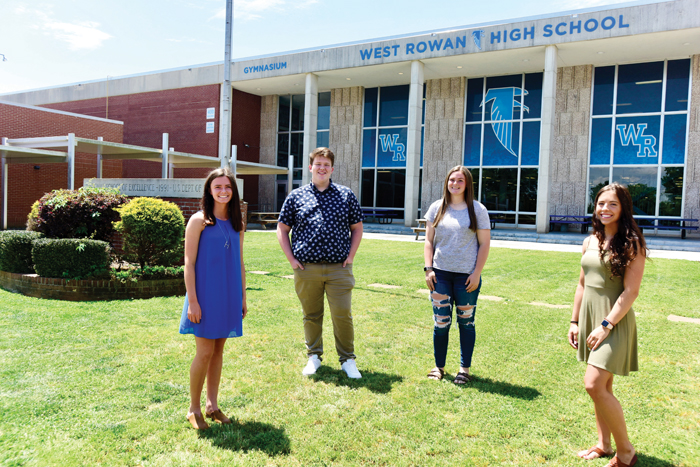 College and expected major: I plan to go to UNC Wilmington and major in exercise science.

Career goal: To become a occupational therapist or a physicians assistant.

Letter sports and leadership positions: I was a varsity cheerleader and part of NHS as well as ServeU I coached a cheerleading team with members with disabilities and was a member of the volunteer youth group at my church.

Defining moment: Seeing all my classmates gather at our high school for one of the last times. It was defining and rewarding because I felt as though we had finally made it and we had been through it all together.

The secret to your high school: Having a planner. I wrote everything down and divided my work amongst the days of the week based on how busy I was each day. It saves time and stress.

If I had $10 million: I would give some to my close family and use the rest to start a business and retire early.

Outside school: I participate in the Back Creek Presbyterian youth group and church choir

Defining moment: The first time I performed a song on my high school stage. All my life, I’ve loved music and I’ve sung in church and any other place I could find the time. The first time I performed on that stage was the first time that I performed in front of a large group of people and had been able to showcase my talent and passion after I had worked so hard to develop and train my singing voice. It also set me on a path to improve myself as a singer and push me to accomplish greater things such as being in the Mars Hill University Choral Festival and being selected for the N.C. Governor’s School for choral music.

The secret to your high school success: Creativity and taking every opportunity given to me. When you are faced with a significant challenge, you have the option of giving up or persevering and finding a creative solution. I’ve found it’s so much easier to think outside of the box to solve a problem rather than trying to do something traditionally and then just giving up.

If I had $10 million: I would first pay for my bachelor’s degree, and then a graduate degree. I would then use the rest of the money to make an impact in the world, a positive difference in the lives of others. Whether that be through funding something in the medical field, or starting a humanitarian or environmental campaign. I want to be able to give back to others.

Defining moment: Committing to continue my softball career and living out what I have worked so hard to accomplish.

Your secret to high school success: Prioritize. School always comes first, even if it means you must sacrifice.

If I had $10 million: I would buy my parents a brand-new home and give back to them since they have always done everything for me.

Career goal: Ultimately, I would like to become a pharmacist, eventually working in a hospital or someday running my own pharmacy.

Defining moment: Losing my grandfather and my father in the beginning of 2012 affected me greatly. For a majority of my life before that it was just my mom and I. My grandfather helped raise me quite a bit, and we were inseparable. I didn’t know my father that well, but at the end of the day he was my father and losing him hurt quite a bit. I was young, I didn’t really understand what had happened, and I had to learn how to live without both of them. Ever since then I have done everything I can to make them proud, and to show although you are faced with several obstacles you can make something of yourself.

The secret to your high school success: Staying focused, and being motivated. If you feel like you can’t do something or if you feel like it’s just too much, do it for someone else rather than yourself. Think of how proud someone in your family or someone you’re close to will be, and use them as your motivation.

If I had $10 million: I would give back to my community such as my church and the schools I attended. I would also donate to several charities, non-profit organizations, pay off my mother’s student loans, and help my stepfather start a creamery which he’s dreamed of forever. I would also like to help others pay for a higher education.