He’s on first … and she’s on second: Yang fits right in with Salisbury baseball team 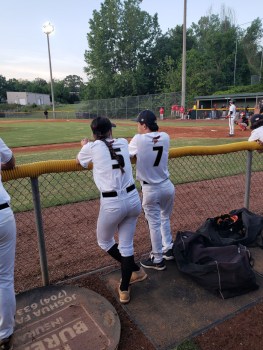 Ellen Yang, with her brother Aaron on the sidelines, says everyone on the baseball team has been supportive. Submitted photo 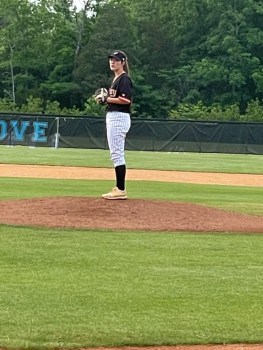 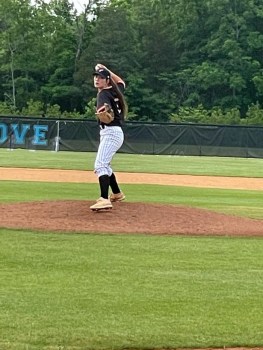 When the pandemic upended the high school sports schedule, it allowed her to join the baseball team.

SALISBURY — Salisbury first baseman Jackson Murphy didn’t expect to be escorting a teammate to the prom when this school year started, but not much about 2020-21 has been ordinary.

Murphy’s prom date frequently plays next to him on the diamond.  Second baseman Ellen Yang, the softball/volleyball standout, is lending a hand to a short-handed baseball program.

Yang wears her trademark visor and softball pants, but her No. 5 jersey looks just like her teammates’ and identifies her as a member of the Salisbury Hornets baseball squad.

Yang hasn’t been amazing in a statistical sense, but her performance has been noteworthy. In an otherwise all-male environment, she’s held her own. She bats ninth, but she hasn’t been the weakest stick in Salisbury’s lineup. She has three hits and two RBIs and she’s scored four runs. Defensively, she’s made three errors, but two came on opening night when she was still dealing with understandable jitters. Basically, she’s made the plays. She’s slick with a glove and she’s got enough arm. She’s started every game.

“It has taken a lot of adjustment,” Yang said. “In softball, I’ve been a third baseman or a pitcher, and the ball is on you very quickly. At second base, it takes a while for the ball to get to you, but I’ve learned to charge it. The baseball field is much bigger, with bases so much further apart, but I’ve gotten to really like being a second baseman. Jackson Murphy and (shortstop) Vance Honeycutt are a huge help. They’ve been my friends for a long time. They’re funny. They’re supportive. The whole team has been supportive.”

Salisbury head coach Mike Herndon said he and his son, assistant coach Carson Herndon, have tried to talk Yang into giving baseball a try for years.

“Carson was always at our softball games, and he was after me to play baseball,” Yang said. “I was thinking, ‘Well, whatever.’ I knew I could never play baseball because softball and baseball seasons are always at the same time. But not this year. With the sports schedule we have this year, when I finished softball, baseball was starting.”

Softball season ended for the Hornets on April 27. The first baseball game for Salisbury was April 28.

“I remember she showed up for this 6:45 workout and I said, ‘Dang, you’re serious about playing,'” Mike Herndon said. “She really has been. I’ve never coached a girl in baseball, but it’s all been good. Ellen is basically one of the guys. She’s one of us and does everything but carry water coolers, and she’d do that if we let her. The guys love her to death. The coaches love her to death. She’s been awesome.”

On May 17, Salisbury played at East Davidson. That game provided Yang’s proudest moment. She got a pitch in her wheelhouse and drilled it over the left fielder’s head. Two hops and the ball was banging off the fence.  Yang was headed to second with a double.

“I thought it was going out,” Mike Herndon said. “Ellen is capable of getting hits like that. She smokes balls in batting practice.”

Yang said it took several games to get used to the speed at which baseballs are fired by pitchers from powerhouse schools such as Oak Grove, Ledford and North Davidson.

“I didn’t hit well early in the season,” Yang said. “That’s because I was swinging at some terrible pitches. I’ve gotten more patient, but if that first pitch is a good one, I’m ready.”

Not long after her double, Yang pitched in relief in a lopsided loss to Oak Grove. She got five outs.

“I was standing out there in the bottom of the first inning, they were having a big inning, and then I realized Coach Herndon was pointing at me,” Yang said. “So I went to the mound. Pitching was fun, but I had to learn to come to a complete stop when I was pitching with people on base.”

On May 21, Max Crawford, who does some catching for the Hornets, was on the mound against Lexington, so Yang went behind the plate. She had the distinction of catching Crawford’s five-inning no-hitter, which included 13 strikeouts.

“She can throw it to the bases accurately,” Mike Herndon said. “She’s got a quick release. She’ll catch again.”

Yang’s role in Tuesday’s 9-3 win against Central Davidson was typical. She was 0-for-3, but she put the ball in play twice. Defensively, she handled five chances behind pitcher Chase Shoaf. She fielded two grounders cleanly, caught two popups and grabbed a line drive.

“She’s a very consistent person and you know exactly what you’re going to get from Ellen every day,” Mike Herndon said. “You’ll get effort, she’ll battle at the plate, and she’ll make most of the plays in the field. All the guys know we’re lucky to have her.”

“Opposing coaches have told me, ‘Hey, she’s good’ or ‘The girl can play,'” Herndon said.

Salisbury has patched a team together this season and is 4-4, with Central Carolina Conference games remaining against West Davidson and South Rowan.

The Hornets also were fortunate to add a talented female to the mix.

“There are several softball girls in this county who could play baseball,” Yang said. “But they’re at schools that already have plenty of quality baseball players. My school had a need and I wanted to help. It’s been a lot of fun. I’ll take away some great memories.”