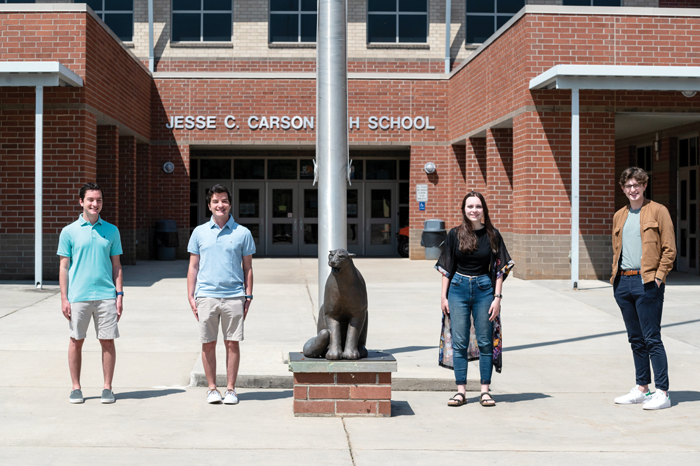 Outside of school: Member of Chartered Committee for Youth for the North Carolina Episcopal Diocese, lead actor in North Carolina Thespian All State Musical.

Defining moment: A defining moment in my life was when I first stepped on a stage in fourth grade for an audition at the Norvell Theatre. As a kid growing up with a speech impediment, the thought of getting up on a stage was unfathomable to most. But I kept working at it and finally landed a part after many failed auditions. A full-circle moment for me was when I was able to perform as Seymour in this year’s spring musical, Little Shop of Horrors, at Carson High School.

The secret to your high school success: Looking for and taking advantage of all of the opportunities around you. For example, I applied to the North Carolina School of Science and Math Online Program in my sophomore year and it has helped to develop me into the proactive learner I am today. Secondly, don’t be afraid to share your thoughts and speak up. Even when you are met with adversity and hardship, get back up and keep going. Most of all, remember to be brave, be kind, and stand up for what is right.

If I had $10 million: I would first use it to support LGBTQ+ advocacy organizations as well as community-based arts programs. Furthermore, I would use a portion of it to travel the world, starting with seeing as many Broadway shows in New York City as I could. I would also love to provide for my family so that they could have anything they’ve ever dreamed of.

College and expected major: I plan to go to Montreat College and major in English

Career goal: I hope to work in publishing as an editor and hopefully get my own book published.

Leadership positions: I was an extremely active member in theater all four years of high school. I also was part of the marching band my freshman year and chorus my sophomore and junior years.

Outside school: I’ve helped lead worship at various churches. I also run an Instagram account where I review the books that I read.

The secret to your high school success: Find the thing that you love to do, and give it the time it deserves. I definitely wouldn’t have had the amazing high school experience I had if it wasn’t for theater.

If I had $10 million: I would make sure my family was taken care of, donate some of the money to charity, and wait to use the rest of the money for college and adulthood.

College and expected major: UNC-Chapel Hill with an intended major in chemistry or biology.

Career goal: My career goal currently is to get a job in the research field after graduating.

Outside of school: Volunteering at Habitat for Humanity over the summer breaks and being involved in my church’s youth group.

Defining moment: A defining moment in my life would be transferring schools between eighth and ninth grades. By switching to Carson, I was able to be involved with the school’s theater program and was able to take a lot more rigorous classes than I would have taken at my home school.

College expected major: I plan to attend UNC in the fall. I am currently undecided on what I would like to major in, but I am considering biology and environmental science.

Leadership positions: Lead roles in three theatre productions at Carson, Smee in “Peter and the Starcatcher,” Sancho Panza in the “Quest for Don Quixote,” and Mushnik in “Little Shop of Horrors.”

Outside of school: Volunteering at the Habitat for Humanity Restore during summer break and being involved in my church’s youth group.

Defining moment: A defining moment in my life would be auditioning for my first play at Carson. Since that play, I have been a part of seven theater productions at Carson, and I have found a community of friends. The theater program has also taught me a lot about hard work, working with others and leadership.

If I had $10 million: I would pay for my college education, give some to my family, and give back to the community.