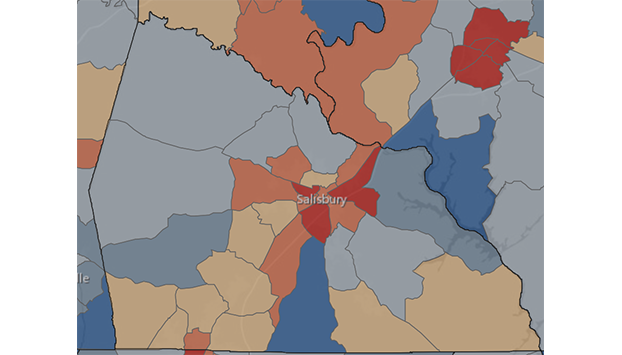 While some communities are just 16% vaccinated, others are nearly 50% vaccinated, according to data from the North Carolina Department of Health and Human Services. The percentages come from a May 11 map for people 12 and older by Census tract. State officials updated the map with the May 11 data on Tuesday.

Children have not been OK’d to receive one of the available COVID-19 vaccines.

State data show 41,519 Rowan County residents, or about 29.2% of the county’s population, are at least partially vaccinated. Statewide, the same number is 42.4%. Depending on where people live, a more localized percentage could be higher or lower.

Census tract 504 is also considered among the most “socially vulnerable” in the state because of issues such as poverty, lack of access to transportation, crowded housing and other economic and social factors. Rowan County has three of the 90 Census tracts in the state with the highest social vulnerability — two of which are in the Salisbury city limits and one that contains the town of East Spencer.

The most-vaccinated Census tract in the county is No. 513.02, which covers an area north of Grants Creek, east of U.S. 601 and west of the Yadkin River. Country Club Hills, parts of the Franklin community, Ellis Park and St. Johns Woods are among the communities in the Census tract. In the area, 48.2% of people 12 and older have been vaccinated.

The Census tracts closest to West End Plaza, where the Rowan County Health Department held mass vaccination events for months, all have rates higher than 40%. Unincorporated areas within the Census tracts are immediately northwest of Salisbury’s city limits. Communities in the city limits in the top-performing Census tracts include Milford Hills, Meadowbrook and Westcliff. Two of the three Census tracts have a higher than average social vulnerability rating.

By releasing the map, state officials hope to prioritize where to focus attention, a news release said.

“This mapping tool is another great example of how we and our providers continue to rely on data to drive our work and help every North Carolinian have easy and convenient access to a COVID-19 vaccine,” said NCDHHS Secretary Mandy K. Cohen. “The vaccine is the best protection against COVID-19 and virus-related hospitalization and death. It protects you and your community.”

To view the full, interactive map for Census tract data, go to: bit.ly/censustractsmap.

• The number of positive tests among local residents in the previous two weeks is 169.

• The number of COVID-19 dead in the county remains 306 since the start of the pandemic.

• Hospitalizations for COVID-19 are below 699 statewide. In Rowan’s region, the Triad Health Care Preparedness Coalition, there were just 159 people hospitalized for COVID-19 Tuesday.