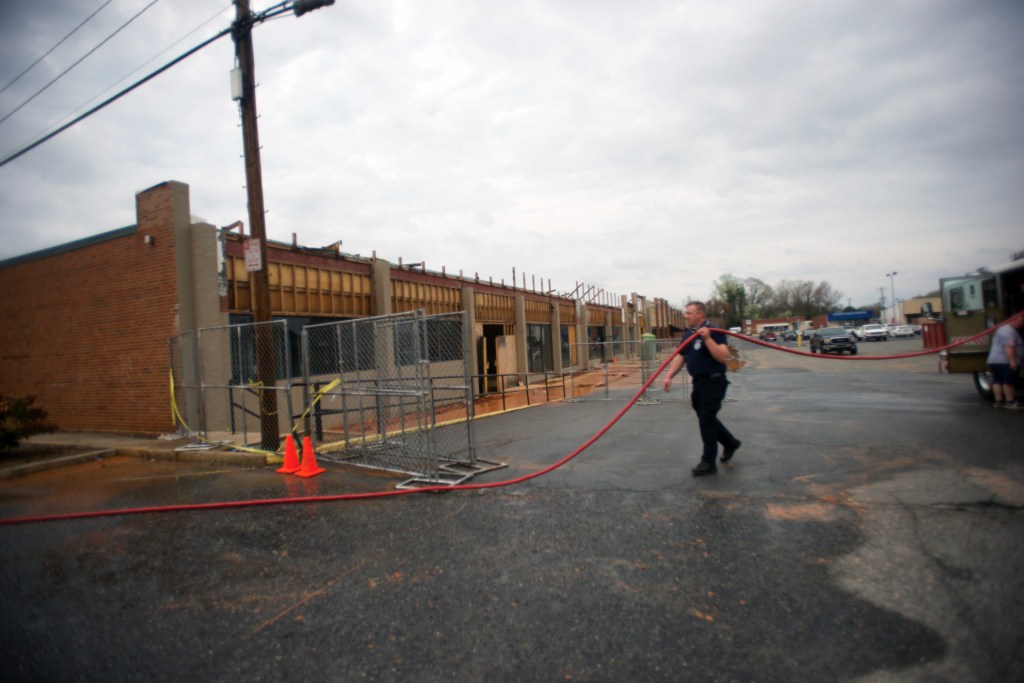 SPENCER — Contractors are installing a new roof on the section of Park Plaza purchased by Spencer to turn into the town’s new administrative facility.

The repair will fix the major leaking problems with the roof and the design issues that caused it to not drain correctly and deteriorate in the first place.

Project architect Keith Wales said the original design of the roof had no slope, a mistake with any building.

Wales said it is impossible to make any surface perfectly flat on a building, and attempting to do so leads to problems. Several  slightly concave sections water to collect and weigh down the roof.

As time went on, the weight of water pressed those sections further down so even more water could collect and began to destroy the membrane that keeps moisture out.

In April, the town Board of Aldermen toured the building. The studs for all the new rooms were already in place and Wales walked them through the facility-to-be. It was not raining, but there was still water leaking through the roof.

Town Manager Peter Franzese said contractors have been focusing on the roof since the area was hit with heavy rain a few weeks ago.

“It was raining quite a bit in the building,” Franzese said.

Wales said replacing destroyed pieces of structural decking, bringing the facility up to code, installing new insulation and a roof are part of the original scope of work.

The drainage problem is being fixed by giving the roof a slight slope. It will appear flat to an onlooker, but Wales said the slope moves the water off the roof to where it should be.

“We’ve pretty much just made it watertight and ready for the next 40 years,” Wales said.

Wales said, unfortunately, many buildings constructed in the ’60s during the advent of membrane roofing have problems like these and sometimes today roofs are still installed incorrectly.

Franzese said the project has remained on schedule and the framing has progressed since the tour, but for the most part the project looks the same inside as it did in April.

The work on the roof could not start earlier because the contractors were awaiting an order of steel. During the past year, there have been shortages and supply chain issues for building materials. The order was delayed until late April, when it arrived earlier than expected after the last delay.

“Its been going well, it’s staying on track,” Franzese said, adding the project is almost at the halfway point.

The contractors have also been finishing some utility work and working on exterior framing this month.