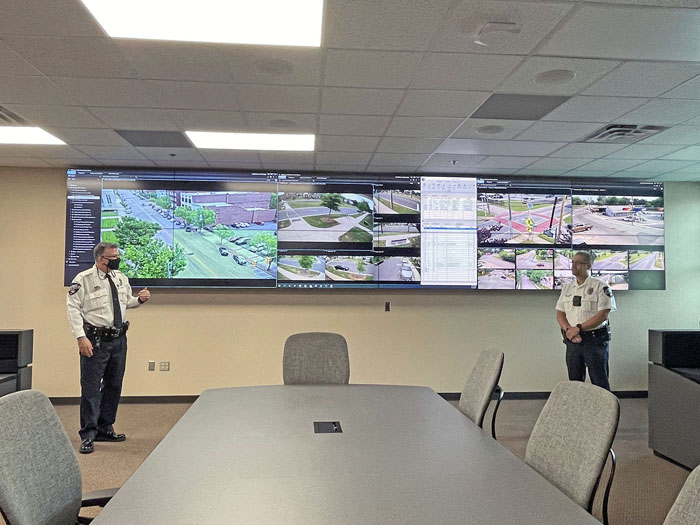 SALISBURY — On the second story of the Salisbury Police Department, a set of video boards featuring live footage from 65 cameras placed across the city is being used to more proactively combat crime.

In addition to the cameras, the center allows for a shared record management system among law enforcement and analyses to support data-driven operations and more comprehensive investigations. Currently, the center is being used as a collaborative resource for Salisbury Police, the Rowan County Sheriff’s Office and Spencer Police Department.

Before the tour, Salisbury Police Chief Jerry Stokes acknowledged the one-year death anniversary of George Floyd, a Black man who died after a police officer kept his knee on Floyd’s neck for several minutes.

Stokes said the center was born out of the department’s work over the last five years to implement modern technology and revisit crime investigation procedures to achieve its goals for community policing and collaboration.

Lt. P. J. Smith, who operates the center, said it will allow for the dissemination of hotspot crime area information and other details to help law enforcement agencies focus resources more proactively.

Stokes said the center will also assist with the renewed partnership with the Salisbury-Rowan chapter of the North Carolina NAACP and the “Cease Fire” initiative, which aims to stop gun-related violence. The ultimate goal is to use the center as a central communications hub for all local law enforcement agencies, firefighters and emergency medical services staff. Already, information has made its way to assist with arrests in Delaware and Miami.

“Our ability to share and have a central location for that information to pass through and be sent out is extremely important for the county’s effort to reduce violent crime,” Stokes said. “We have transformed our policing into data-driven and use of technology to enhance our work and then build our partnership with other law enforcement agencies, other organizations and the public to provide the best service we can.”

Smith and Stokes said all cameras were placed with privacy in mind, and ownership includes the city and some local housing complexes. Data is stored up to 30 days.

The center was primarily funded by a U.S. Department of Justice grant and with the help of Budd, a Republican who represents North Carolina’s 13th congressional district where Rowan County is situated. Budd said the grant process was competitive, and credits local law enforcement for its “spirit of collaboration.”

In 2018, the Salisbury Police Department was designated a Public Safety Partnership location and granted no-cost training for technical assistance, Stokes said. And in late 2019, after training and reviewing the department’s practices, Salisbury Police was awarded a Strategies in Policing Innovation grant for $500,000. The grant allowed for the construction of the center, with a supplemental United Way grant and budgetary funds assisting with the expansion of its surveillance camera network.

Stokes said the center has assisted with solving a handful of crimes since its implementation. Even with far fewer cameras installed at the time, the center assisted with a homicide that occurred in May 2019 in which police charged Jeffrey Wayne Hooker Jr., with the killing of Mya Miller near the intersection at North Long Street.