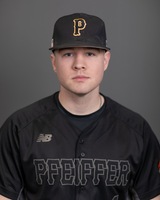 Hard work, good character, leadership selflessness and a deep passion for the game of baseball are all traits that described this year’s winner, and those of the late Joe Ferebee.

“Brett Graham has been a tremendous asset to our program over the past few years,” said head coach Craig Bolton. “His dedication and work-ethic on and off the field is unmatched. Brett was our ultimate team guy this year, going above and beyond in many different areas, not only for his own successes but the team’s successes. He is as selfless as they come with an immense passion for just wanting to be on the baseball field and making people around him better.”

John Owen (East Rowan) was 3-0 for Pfeiffer this season.

Heart of a Champion

West Rowan’s Braden Graham (basketball) and Allison Ennis (volleyball, softball) are among the 35 NCHSAA Heart of a Champion winners for this school year.

Allison Ennis was also the winner of the Chris McNeil Courage Award for this school year.

Salisbury native Teresa Wallace is ranked 27th in the world and is expected to compete for Team USA  in the Paralympic Games in Tokyo this summer.

Action is set for the Spring League in Indianapolis tonight.

Romar Morris (Salisbury) and the Aviators play on FS1 at 10 p.m.

Peyton Summerall and Lucas Graham had RBI hits in the fifth to lift West Rowan to a 2-1 North Piedmont Conference win at North Iredell on Wednesday.

Jake Blevins (2-2) pitched into the fifth inning for the win. Casey Gouge got the last seven outs, striking out five, and earned a save.

West has won six in a row.

East Rowan registered a key NPC road win by taking an 8-0 victory at South Iredell and is tied for first with West Rowan and Carson.

Cobb Hightower had two RBIs for the Mustangs.

East had 10 hits, with Cameron Padgett and Morgan Padgett getting two each.

Caden Hudson drove in four runs for Carson in Wednesday’s 19-0 win against Statesville.

Nick Alderfer and Connor Welker had two hits for the Chargers.

Salisbury scored nine runs in the first inning and beat Central Davidson 9-3 for a Central Carolina Conference win on Tuesday.

South Rowan cruised to a 14-1 Senior Night win against Thomasville on Tuesday.

Jackson Deal, Caleb Nesbitt and Colton Fisher handling the pitching. for the Raiders, who played at Ledford tonight.

Oak Grove and North Davidson square off in CCC baseball on Thursday. Both are undefeated in the league.

Zion Milton had two hits for North. Jaden Robertson and Kolby Smith had doubles. Smith and Joseph Hartman did the pitching.

Solomon Eudy had three hits for the Knights. Brayden Redwine was the winning pitcher.

Gray Stone’s Katelyn Griggs was the Yadkin Valley Conference Player of  the Year.

Carson won against East Rowan 9-0 to improve to 8-0  and 6-0 in the North Piedmont Conference.

Salisbury stayed unbeaten on Wednesday with a 9-0 win against North Davidson.

Salisbury plays at Carson on Thursday.

West Rowan (11-2, 5-0 North Piedmont Conference) wrestled outdoors on the Carson football field on Tuesday and came away with lopsided victories over the Cougars (69-9) and Cox Mill (64-18).

The win over Carson gave West an outright NPC title.

Christian Kluttz had a pin for Carson at 120.

West lost three matches by pin to Cox Mill, but breezed to another victory.

The Falcons will wrap up the regular season when they wrestle South Rowan and Lexington at South tonight. The NPC tournament will be held Saturday, June 5. There are no dual team playoffs this year, but individual regionals are set for June 15, with the state tournament to follow.

Doby had a 157-49 coaching record in regular-season games and his teams were 93-18 in conference play.

He coached Ledford to three Christmas tournament titles, two regular-season titles and five conference tournament championships. His 2017-18 and 2018-19 squads made the Elite Eight.

The turnout was good for Lady Legion softball.

Rowan County is expected to field Junior and Senior teams with 22 on each team.

Davidson County won 7-0 and 4-3 against Davie County on Tuesday.

Brian Howell of Granite Quarry made a hole-in-one at McCanless on Monday.

Howell aced the No. 10 hole, which was playing 165 yards from the blue tees.

Howell hit a 6-iron, choking down on the club an inch to flight the ball into a tough front pin location.

His shot landed 4 feet in front of the flag and jumped in the hole.

He was playing with partner Kevin Burges with whom he was qualifying for the Grady B. McCanless Four-Ball Championship that is coming up in a couple of weeks. Also playing in the group was Brad White.

Howell was recent Senior Games winner. He’s been a competitive golfer for almost 40 years. This was his first hole-in-one.

East Rowan graduate Logan Shuping and former East Carolina teammate Blake Taylor were eliminated in the Round of 16 on Tuesday in the  U.S. Amateur Four-Ball Championship.

Shuping and Taylor were runner-up in the tournament in 2019.

The McCanless Couples played a Captain’s Choice event on Sunday.

Maseuli had closest to the pin.

Rowan Masters qualifying rounds at Warrior are on June 19 or June 20. The best 31 from 18 holes of stroke play join defending champ Nick Lyerly in the field.

Michael Childress of Salisbury competed in the 6th Carolinian Championship held at Keith Hills Country Club in Buies Creek. Childress shot 70-72-77 — 219 and tied for 15th at 3-over.

The senior outfielder is Catawba’s first position player to earn all-region honors since 2015.

Conference USA has finalized dates for the 2021 football season and released a portion of the league’s broadcast schedule.  Charlotte will have a school-record four games televised nationally on CBS Sports Network, including three home games.