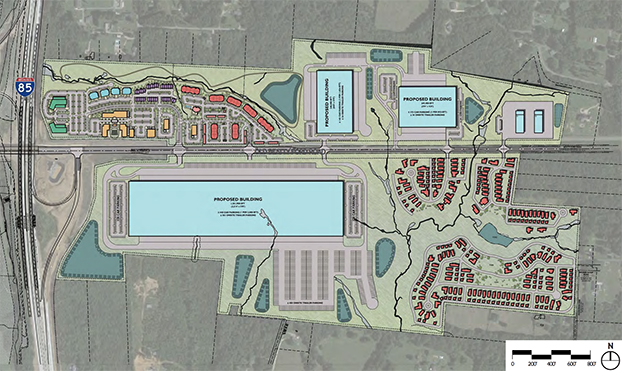 KANNAPOLIS — When the N.C. General Assembly passed a bill in 2019 allowing Kannapolis to annex land in the Old Beatty Ford Road area, the moment was heralded by local leaders as a major win for economic development.

After the bill passed, Kannapolis Mayor Darrell Hinnant proclaimed the “biggest project that has happened in southern Rowan County for decades” would take place on the land.

During the Kannapolis City Council meeting on Monday night, details on the much-anticipated project were presented to the city’s leaders. The 318-acre property near I-85 exit 65 is set to be transformed by Louisiana-based Commercial Properties Realty Trust into a mixed-use development called Kannapolis Crossing and feature apartments, homes, warehouses, shops and restaurants.

Although plans for the development have changed over time, Hinnant said he still sees the project as a win for Rowan County.

“The original vision was more residential and less industrial,” Hinnant said. “But what the developers found is they couldn’t sell all of that under that scenario. So they had to squeeze down some of the mixed use and open up for industrial use. It still turns out to be a very good project. It’s lots of jobs for southern Rowan County.”

The potential agreement between the city and Commercial Properties Realty Trust calls for 100% of the project to be completed by 2028 and a total investment of $368 million.

Once the development is fully complete, Kannapolis Crossing will boast 77,400 square feet of retail, restaurants, a brewery and office space as well as 224 units of multi-family residential housing, 33 townhomes, two hotels, 142 single-family homes and multiple warehouses.

The property’s 318 acres has been split into five portions. As currently planned, the roughly 40 acres on the northwest corner of the development will contain two restaurants, two hotels, two drive-thrus, four office buildings, apartments, townhomes and a brewery.

The majority of the retail space is projected to be completed in the initial two years, but the hotels won’t be constructed until the last few years of the development’s build out. A greenway is also planned for the northern portion of the property.

The roughly 110 acres on the southwest portion of the property closest to I-85 will house a 1.3-million-square-foot warehouse with 656 parking spaces.

The 65 acres on the southwest corner of the property is the future home of a neighborhood featuring 142 single-family homes with 284 parking spaces. Residential construction is scheduled to begin in 2022, with the first units move-in ready by 2023.

Commercial Properties Realty Trust will retain flexibility about changes to the development’s master plan, but any material changes must be approved by the city. For example, Legg said, developers could alter the number of hotels on the property, but they couldn’t decide to build another warehouse where the townhomes are planned.

The agreement sets a minimum tax value target for the development at $90 million by June 2028, but Legg said city leaders and developers expect the number to be much higher.

A rezoning of the property to allow for Kannapolis Crossing was approved by the Kannapolis Planning Board during its May 18 meeting. Now, with the agreement signed by the developer, the only domino left to fall is a public hearing scheduled for the city council meeting on June 14. After that, council members expect to vote on the agreement and sign it.

In addition to hearing details about the Kannapolis Crossing master plan, council members unanimously approved a $10.4 million capital project ordinance to build utility infrastructure out to the property.

To fund the infrastructure improvement, Kannapolis intends to borrow $7.4 million using a combination of the $3 million contribution from Commercial Properties Realty Trust and $1 million from Rowan County to offset the total project cost.