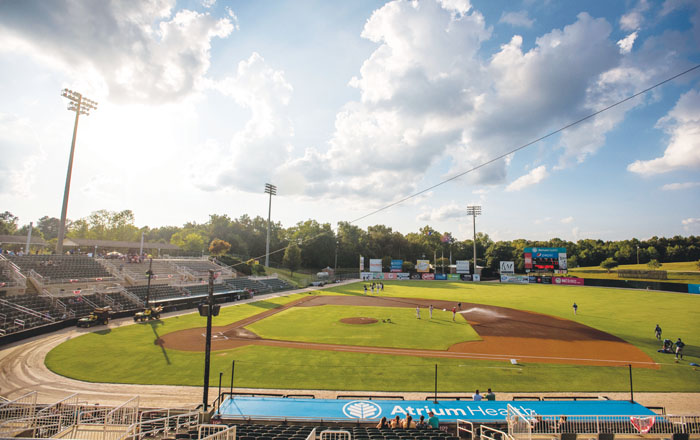 KANNAPOLIS — As the Kannapolis Cannon Ballers play their inaugural season in the city’s new downtown ballpark, plans have materialized for the site of the team’s former stadium.

The Kannapolis City Council on Monday night unanimously approved a purchase agreement to sell the 55-acre site near I-85 where the vacant Intimidators Stadium stands for $3 million to Fortius Capital Partners.

The Concord-based company was the city’s preferred developer out of the two developers who submitted proposals. Fortius Capital Partners will be joined by Richardson Properties and Windsor Commercial in the development of the site.

The group plans to build three industrial buildings on the site, ranging from roughly 100,000 to 300,000 square feet. The total development is projected to cost about $49 million and will be called Lakeshore Business Park.

The buildings will be constructed speculatively, without a specific tenant in mind, and marketed to prospective companies. Fortius will target manufacturing, assembly and distribution companies to move into the buildings. Harris Morrison, a representative from Fortius Capital Partners, said the company will search for long-term tenants who provide good-paying jobs.

The buildout of the development is expected to take three to five years. Morrison said ground could be broken as early as the end of this year. Initial building construction will likely start in the middle of next year. The plan, he said, is to construct the buildings one at a time.

The property is next to Lake Fisher, which is a protected reservoir. Morrison said the company intends to preserve the environmental quality of the property. That would include adhering to water quality standards, preserving the tree canopy where possible and leaving space on the north or south side of the property open if the city decides to create a greenway running by the lake.

“We are local,” Morrison said. “We’re based in Concord. So we drink this water.”

Of the site’s 55 acres, Morrison said only 34 acres will be built on and turned into an impervious surface while the rest will be left natural.

Fortius and its partners will be responsible for demolishing the Intimidators Stadium. Kannapolis City Manager Mike Legg said the city is currently working on a plan to salvage some pieces of the stadium to distribute to interested residents. While the city will likely be able to save bricks and seat plaques, Legg said the seats themselves will probably not be saved.

Councilman Ryan Dayvault said multiple people have approached him with interest in keeping a small piece of the soon-to-be demolished ballpark.

The city of Kannapolis will retain three acres on the northern part of the site for the future construction of a fire station and will also be responsible for paying up to $300,000 in road improvements to patch, pave and widen the portion of Stadium Drive that is outside of the stadium property and owned by Concord.

The approved purchase and sale agreement will allow for up to six months for the inspection period prior to closing.

Walk to End Alzheimer’s is Oct. 29 in Kannapolis