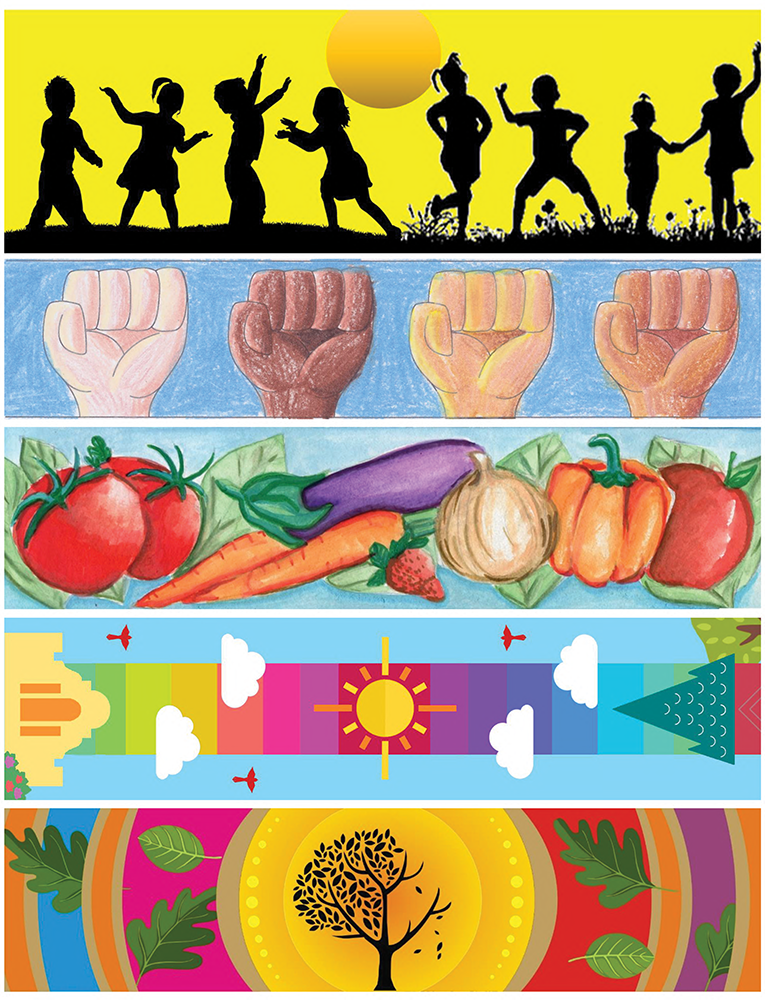 Above are the five different pieces of artwork chosen for the Paint the Pavement project.

SALISBURY — After looking through 32 submissions for the first Paint the Pavement project, the city made final selections for the five crosswalks in the Railwalk Arts District.

Work for the project began last fall after city council members agreed to move forward with a downtown mural depicting the diversity and vibrancy of the Salisbury community. The Public Art Committee began accepting applications for artists of all ages and skills in April for a project intended to celebrate Salisbury’s diversity, history and creativity.

The paintings will be on five crosswalks within Salisbury’s Railwalk Arts District — four at the intersection of Kerr and Lee streets and one at the mid-block crossing on East Kerr Street next to Lee Street theatre. The paintings would become city property because they’re located in the public right-of-way.

Urban Design Planner Alyssa Nelson presented the final selections during a Public Art Committee meeting Monday. A piece called “Kids” will be placed at one of the two crosswalks on East Kerr Street. Local artist David Gaines created the piece, and told the Post his inspiration derives from the joy experienced from witnessing children’s sense of freedom and quirkiness.

“It gives me a sense of joy when I see young children doing that,” Gaines said. “Not obstructed by being an adult yet.”

Names of other artists were not released Monday.

The piece “Growth Looks Different Ways” will be placed at the opposite crosswalk on East Kerr Street. Public Art Committee member Jane Creech, who was also on the selection committee, said a tree in the middle with some of its leaves falling off symbolizes that growing sometimes means letting go of leaves to gain new ones while holding onto some of the old.

“Nurtured Nature,” which includes painted vegetables, will be placed on the mid-block crossing between Lee Street theatre and the Railwalk Pavilion. Committee member Ed Norvell said it seems fitting to include some veggies near the Salisbury Farmers Market. Creech added that it’s a nod to the local farming community.

“True Unity = True Power!!!,” a painting depicting a group of raised fists from people of varying races, will be placed on Lee Street. “Let’s Walk Together” will also be on Lee Street and features the Salisbury train station connected by a rainbow of colors to the Bell Tower Green Park on the other side.

Nelson said a date to install the art has not yet been finalized, but the aim is a Sunday in June with the potential to split up installation dates. Committee members welcomed Nelson’s suggestion for a separate reception to feature all of the submitted artwork. The Salisbury Station agreed to host the event for free, but Mayor Karen Alexander suggested the Farmers Market Railwalk Pavilion be considered.

Nelson added that because the designs were so impressive she’s hopeful it will spark work toward a downtown mural.