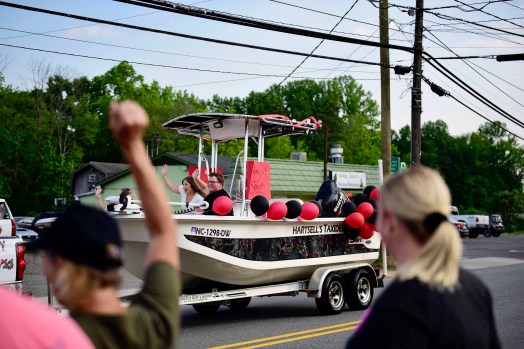 Carl Blankenship/Salisbury Post - High school seniors in the South area were invited to line up and take part in the parade. 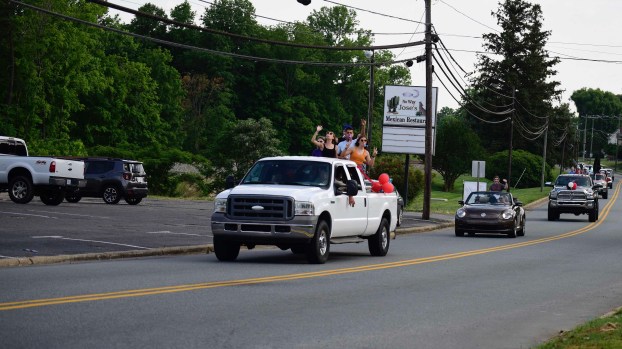 CHINA GROVE — A brief parade of high school seniors passed through Landis and China Grove on Sunday, giving them some recognition as they head into graduation next week.

Any senior could participate, though most were from nearby Carson or South Rowan. The students were packed into cars and truck beds to wave at friends and families as they made their way through the two towns. The short parade passed viewers in a couple minutes, with seniors and parade-goers waving at each other.

China Grove Town Manager Ken Deal said the towns hosted the simple event last year as a way to give the South area seniors some recognition. The towns just have to coordinate briefly blocking off a few intersections.

“It’s a pretty simple thing they enjoy and it doesn’t take a lot of coordination,” Deal said.

Christy Honeycutt attended the parade. Her son, Tyler, is graduating from South Rowan and hopes to go to a trade school. Her daughter graduated from college this year as well. Honeycutt said she was worried the schools would not be able to have graduation ceremonies earlier this year.

In 2020, Rowan-Salisbury Schools hosted drive-thru ceremonies only, but this year’s ceremonies will be held in person at each school’s football stadium. Last week, the district lifted the attendance restrictions on the ceremonies as well.

Natalie Childers’ son, Jagger, is also graduating from South Rowan. He is was dual-enrolled at Rowan-Cabarrus Community College and graduated from the automotive technology program last Saturday. Natalie said he already does auto body work and will take some additional classes at RCCC. Jagger has some entrepreneurial spirit and wants to be a dealer.

She said the dual enrollment program worked perfectly for Jagger and she is excited he will be able to walk across the stage this year.