Ask Us: What happened to bald eagle hatched at Dan Nicholas Park in 2016? 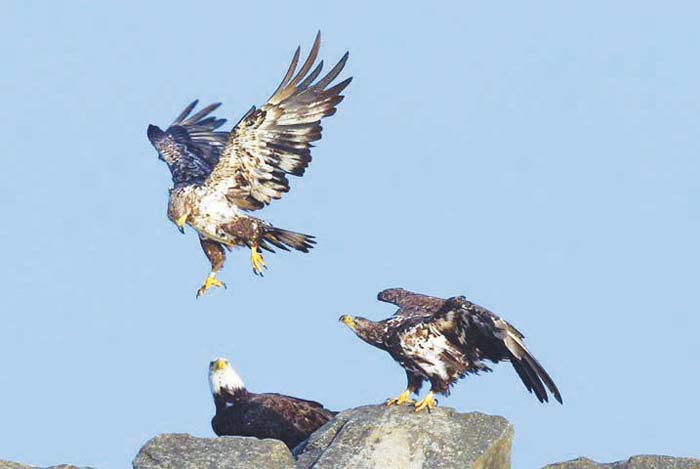 Submitted photo This photograph of Freedom, coming in for a landing, was taken in 2019 on the shores of Lake Erie near Conneaut, Ohio, where Freedom likes to spend his summers. Bald eagles don't usually have their distinctive white heads until they are about 5 years old. Freedom, hatched at Dan Nicholas Park in Rowan County, was 3 years old in this photo

SALISBURY — After tracking young bald eagle Freedom’s travels across the nation for years, an unfortunate equipment failure has prevented Animal Services Director Bob Pendergrass and others from tracking those travels since early February.

Freedom, an eaglet born to bald eagles Liberty and Justice at Dan Nicholas Park in 2016, was transferred and fostered at Carolina Raptor Center in Huntersville, which placed Freedom in an environment where he could be raised to maturity before a release into the wild later that year.

Pendergrass uses a smartphone application called “Animal Tracker” to follow Freedom’s travels over the last 12 months, 14 days or 24 hours. The app can track anything from domestic cats to blue whales.

Anyone with the app can search for Freedom to view his travels. The latest comments on the app from people across the southeastern U.S. who have kept up with Freedom also question his whereabouts since Feb. 2.

Pendergrass said it had become evident Freedom developed a routine and a few favorite spots to frequent.

Since his release, and in keeping with his name, Pendergrass said, Freedom has traveled thousands of miles — as far north as Quebec, Canada, and as far south as Georgia. He spends a lot of time in West Virginia and summers at Lake Erie — near the Pennsylvania and Ohio border.

“I usually checked every couple days,” Pendergrass said. “It wasn’t unusual for him to fly a hundred miles in the middle of the night.”

But Pendergrass and other app users haven’t been unable to view Freedom’s travels since Feb. 2 due to an equipment failure. Pendergrass doesn’t yet know what caused the disconnection, but it’s conceivable a new set of feathers is covering the solar-powered tracker or it has been impacted by water.

But Pendergrass believes Freedom may have become the father of another eaglet because it seems he has made a nest at Lake Hartwell, a man-made reservoir bordering Georgia and South Carolina and encompassing parts of the Savannah, Tugaloo and Seneca rivers. Pendergrass said 5 years old is when eagles reach full maturity and begin breeding, which is typically done in the late winter months. Freedom’s travels show he spent a lot of time at the lake in November and December before leaving and returning a few times before Feb. 2, which may indicate he was making a nest there.

Pendergrass is hopeful, however, that a photographer named Chuck Anderson, who has captured some photos of Freedom used on the Animal Tracker app, will come across the eagle one day soon and provide the world with a photo of his whereabouts. Richard McBride, a photographer from Ohio, has also photographed Freedom as he’s traveled to the Lake Erie and northern Ohio area.

“The fact that this equipment ran for five years was quite impressive, and we did learn a lot about this eagle’s movement,” Pendergrass said.

Is it legal to preach on the streets of Salisbury?

The “public forum doctrine” is a tool used when evaluating the practice of free speech and the constitutionality of speech restrictions on government property. Courts utilize this tool to determine whether groups have access to engage in free speech or expression on such property.

There are three categories of government property for the purposes of speech and expression activities, including traditional public forums, limited public forums and nonpublic forums. The streets of Salisbury are considered a “traditional public forum,” which means the city’s authority to adopt regulations affecting speech is limited, Corriher said. Therefore, the city cannot regulate preaching on its public streets. Instead, city leaders can only adopt reasonable time, place and manner restrictions on speech.

“That is not to say that other regulations do not affect someone’s ability to speak, or do anything for that matter, in certain locations,” Corriher said. “For instance, there are traffic regulations for the safety of pedestrians that restrict them being in or on the actual streets regardless of whether they are preaching or not, according to North Carolina General Statute 20-174.”