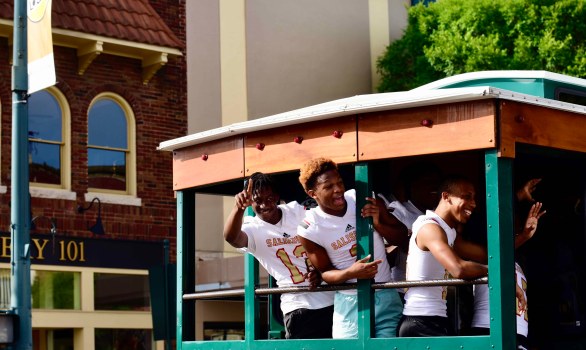 Carl Blankenship/Salisbury Post - The players were hyping up the crowd as they drove past on Main Street. 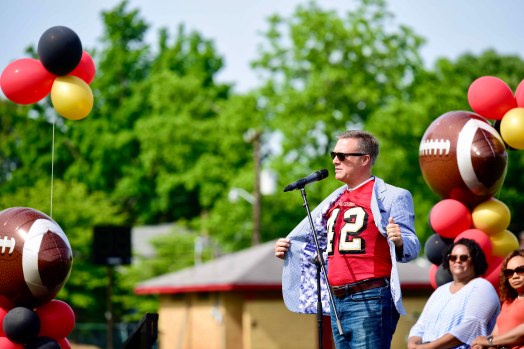 Carl Blankenhip/Salisbury - County Commissioners Chair Greg Edds said he was a hornet for the day on Saturday. 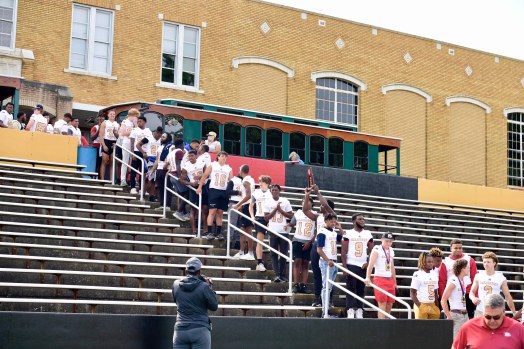 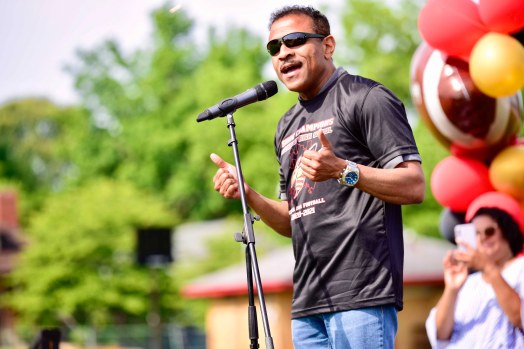 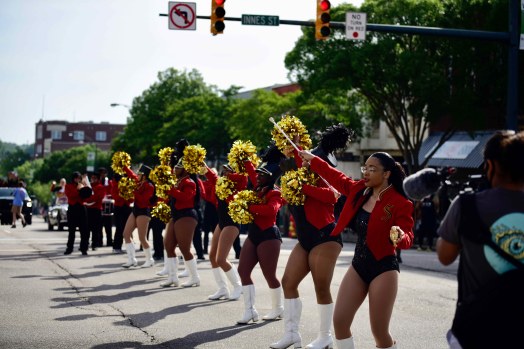 Carl Blankenship/Salisbury Post - Dancers and the marching band lead the parade into the square at the intersection of Main and Innes streets. 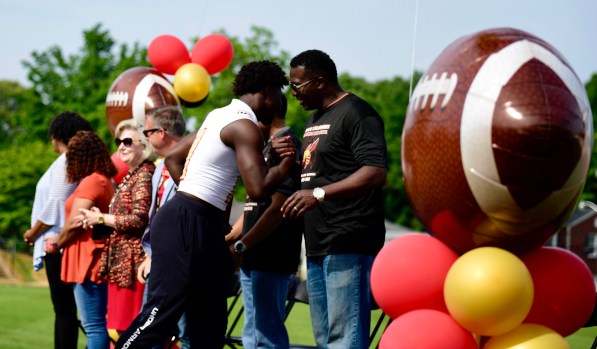 Carl Blankenship/Salisbury Post - Linebacker and Georgia recruit Jalon Walker with Principal Marvin Moore as he walked across the stage to be recognized.

SALISBURY — Fans aren’t usually tuned into high school football on spring Saturday mornings, but the city made an exception for the Salisbury Hornets.

Members of the Salisbury High School 2AA football state championship team on Saturday rolled down Main Street on trolley buses on their way to the school, where they were recognized with a brief program in the school’s stadium. The parade also celebrated state swimming champions Emily and Katie Knorr.

As the players drove past, they waved at a crowd that formed on the street, almost pouring out the doors of the bus to greet the crowd.

Salisbury High Principal Marvin Moore introduced several local officials who attended the ceremony at the football stadium and shook hands with the players as they walked across a stage in the middle of the field. Rowan-Salisbury Schools Vice Chair Alisha Byrd-Clark, Mayor Karen Alexander, Superintendent Tony Watlington and County Commissioners Chair Greg Edds were all present on stage and for the parade.

Edds told the crowd he represents the entire county, but he put a particular team at the top of the list for Saturday’s occasion.

Head Football Coach Brian Hinson told the crowd the team was not sure if they would get to play a football season because of the COVID-19 pandemic.

The team was allowed to host workouts in June, and the players showed up four days a week for morning workouts, preparing and hoping for a season. When 2020-2021 school year started, the Hornets began regular after-school workouts.

“They bought in, they grinded through the workouts and they did the work necessary to be called champions,” Hinson said. “They deserve all the praise for that.”

Hinson also praised his assistant coaching staff for allowing him to give direction at times as well as stand back and let them make it happen at others.

“It’s been a great experience,” Hinson said. “I ask these young men to work hard and they do that. That makes my job very easy.”

The Hornets ran away with the championship, 42-14, in a May 8 match against St. Pauls High School at N.C. State’s Carter-Finley Stadium earlier. During Saturday’s festivities, the score was displayed on the school stadium’s scoreboard.

Senior wide receiver Christian Morgan plans to study criminal justice and possibly walk onto the track team at North Carolina A&T State University this fall. He could not put into words the feeling of not knowing whether he would have a final season and then going on to win the championship.

The entire playoff experience was fun, Morgan said, and beating rival North Davidson was a highlight on top of the championship.

Senior offensive guard Sam Evans plans to play football at Catawba College and study sports marketing. He said Saturday’s celebration was a chance to come back and see the team after the season ended.

“Everybody is still laughing and joking,” Evans said. “It’s just great and knowing that the city is proud of us is a great feeling.”