‘The house that has sheltered life’: Monroe Street home repaired after storm damage 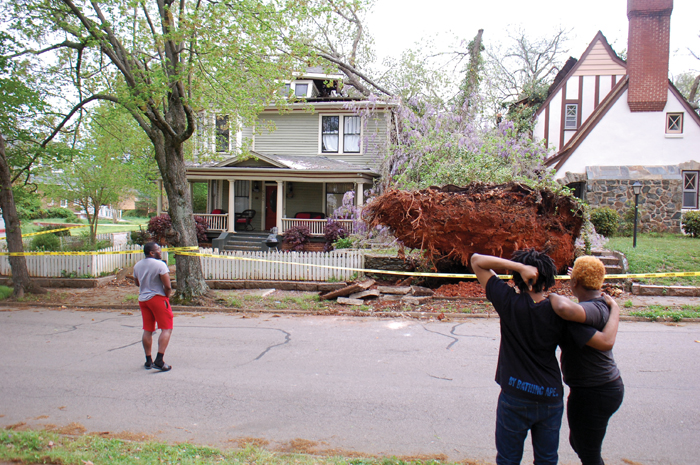 Mark Wineka/Salisbury Post Mikela Hych, right, one of the residents of the historic Lash Family Home at 530 W. Monroe St. (on the corner) surveys the damage caused on April 14, 2019, when an aging oak tree fell and caused considerable damage to 526 and 530 W. Monroe St.

Sometimes bad things happen to good houses. The Salisbury Post reported on damage caused by a severe thunderstorm that traveled through Salisbury on a Sunday evening, April 14, 2019. The beautifully restored home at 530 W. Monroe was crushed by a large oak tree. The tree was so old and large that it destroyed the roof, and also, caused severe damage to the neighboring house at 526 W. Monroe.

Jack and Marie Thompson had purchased the house in 2005 from the Historic Salisbury Foundation. The foundation had received the house as a gift from the heirs of Rev. Wiley Hezekiah and Mayzonetta (Mary) Grundy Lash, prominent citizens of Salisbury. Rev. Lash came to Salisbury as a young Lutheran minister. He and “Miss Mary,” as she was known, established missionary congregations in Salisbury, Gold Hill, Catawba and Yadkinville. Mary who had attended Berea College in Kentucky and finished at Livingstone College, began her teaching career in Salisbury and married Rev. Lash in 1905. According to Mary’s obituary, Dec. 26, 1967, “In 1908 to supplement their scant earnings, the young couple opened a small grocery store in the backyard of their home on South West Street.” That business grew and became an important part of Salisbury’s culture. The couple had three sons, two daughters and a foster daughter. All of the children had successful lives. The oldest son, Wiley Immanuel Lash, made his home in Salisbury and his legacy is imprinted on the fabric of Salisbury. A memorial plaque on the city office building at 132 North Main Street, says it best.

“Wiley Immanuel Lash: Businessman. Political Activist. Humanitarian: First African-American Mayor of Salisbury (1908-1995), Son of the Rev. Wiley H. and Mayzonetta “Mary” Grundy Lash received his education at a local Black parochial school and Livingstone College. He rose to political prominence in the Negro Civic League where he spearheaded a drive to register voters and worked for better facilities, jobs, and schools for Black citizens. Widely respected in the community, Lash advocated peaceful integration in the 1960s. After serving 15 years on the Board of Education, he was elected to the city council in 1979 and was appointed mayor pro tem. Lash became mayor in 1981 and upon finishing his term in 1985, he was named Salisbury’s first honorary mayor. For years, Lash owned and operated a self-serve grocery at 129 East Council Street. The store was an informal hub for political activism and a place where the deserving poor were never turned away. ‘Let us start anew, and so live that all our ties will bind us to the life that is noble for ourselves and for humanity,’ Wiley Lash 2008” 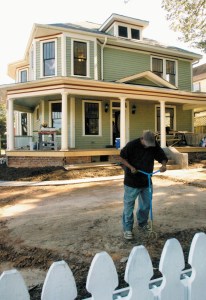 On Oct. 1, 2007, William Neely prepares the ground for seeding at the former Wiley Lash home on Monroe Street. Homeowners Jack and Maria Thomson were preparing the home the OctoberTour. Photo by Jon C. Lakey, Salisbury Post.

The house at 530 W. Monroe had been Wiley Lash’s childhood home. When the Thompsons bought the home, Jack was the director of the Historic Salisbury Foundation, and he loved the “bones” of the house which had been converted into a duplex. The couple put their house in Matthews on the market and began the restoration of the old Lash house. Their house in Matthews sold quickly and they pushed hard to finish their new Salisbury home in time for the 2007, Historic Salisbury October Tour. Jack’s understanding of the importance of historical integrity guided the couple as they restored the home. A front window that had been removed to accommodate the second front door for the duplex was removed, and the original window which was luckily found in the basement was restored to its original location. The pine floors were scrubbed and finished with oil, the paneling in the dining room was refreshed, but not refinished. In a Salisbury Post story on Oct. 7, 2007, Maria Thompson is quoted. “We don’t want to take away from what was here originally. Part of our philosophy is to let it show its age.” A few changes were made to the interior to accommodate a modern lifestyle such as the addition to bathrooms and upgrades to the kitchen, however, all of the important features of the home such as the windows, pocket doors and elegant coal burning fireplaces were gently but beautifully restored.

Because Jack accepted an historic preservation position in Asheville, the house went back on the real estate market 2010. The house was purchased by Cliff and Barbara Sorel and was later rented to the Hyche family. Mikela Hyche, her parents, brother and her 3-year-old son were living in the house when the horrific storm struck on Sunday night. When asked about the damage to the house, Al Wilson of Alfred Wilson Construction, who restored the house after the storm wrote the following:

“It’s difficult to describe the feelings while standing in the upstairs hall looking into two flattened bedrooms with nothing but sky overhead. One has gratitude that the folks were lucky to walk away and then sadness looking at rain-soaked clothing and personal belongings scattered among the bricks and shattered lumber. There were seven souls in the house that evening, but luckily no one was in either of the two rooms or they would not have survived.”

In conversation, Al went on to say the bedroom that received the major damage from the tree had been Mikela’s 3-year-old son’s bedroom. It is a blessing that the young child was downstairs with family when the tree fell. No one could have survived the damage.

Al provided the following description of the work that was necessary to bring the house back.

“Most of the damage was to the right side and to the roof. When the very large oak tree fell across the roof, the force was too much for the two-by-four ceiling joists to hold and most of them broke off at the exterior wall causing the roof to unfold and flatten out like an origami diagram in a magazine. The main trunk and several large limbs continued down, crushing the right exterior wall, the chimney and the ceilings in the two upstairs right-hand bedrooms. The weight of the chimney crashing down on the bedroom floor snapped many of the floor joists over the living room, but the flexibility of the wood floor and plaster lath ceiling was enough to arrest the downward motion of tree, chimney, roof, ceiling, air handler and Christmas ornaments.”

Al continued, “The challenge of putting the house back together better than the tree found it was the hook. Cliff provided the resources along with plenty of rope and minimal adult supervision to tackle the job.”

“The first priority was to protect what remained intact. The floors upstairs were salvageable and the downstairs floors had very little damage. We bought 24-foot, two-by-six tarps, and built a single slope roof. We started in the crawl space by supporting the first floor to lift the second floor back into position, then rebuilt the walls, the ceiling and the roof. We used two-by-eights for the ceiling joists and cantilevered them out as before, but the rafters now bear directly on the exterior walls. Drywall replaced plaster, moldings were replicated identical to what was there, all of the floors were refinished and painting inside and out was completed. The stained-glass window in the stairwell was rebuilt by Tom Ford and the mantles refinished for the final touch.”

Salisbury is very lucky to have professionals like Al Wilson who have the knowledge, the ability and the willingness to attack projects like 530 W. Monroe.

What does the future hold for the Lash Family home place?

Joyce Kilmer’s poem, “A House with Nobody In It” stanza 4 comes to mind.

But a house that has done what a house should do,
a house that has sheltered life,
That has put its loving wooden arms around a man and his wife,
A house that has echoed a baby’s laugh and held up his stumbling feet,
Is the saddest sight, when it’s left alone, that ever your eyes could meet.

The good news is the Sorels have found a buyer. The house is under contract, and a new family will be calling 530 W. Monroe home by early June.

Salisbury, as well as all of Rowan County, has many houses that are waiting patiently for a new family that it can wrap its wooden arms around. If you are interested in meeting one of these wonderful homes, please contact the Historic Salisbury Foundation. We will be happy to make the introductions.