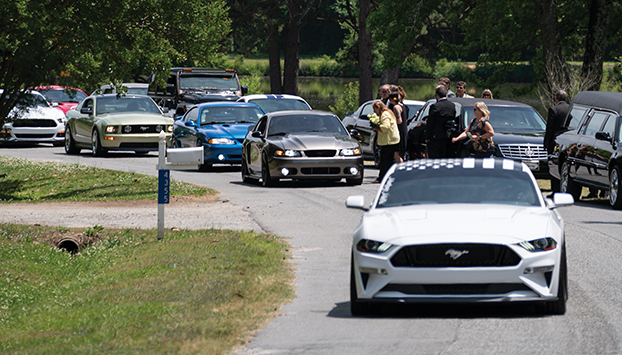 Josh Bergeron / Salisbury Post - Mustangs rev their enginges and speed off after receiving a flower during a funeral service Saturday afternoon for bobby Black, who was killed in a car crash last week on I-85 in Concord.

FRANKLIN — Bobby Black wouldn’t have it any other way.

The rumbling engines from Triad-based Mustang Mafia let out a roar as the cars sped away from Rowan Memorial Park. The club helped lead the funeral procession for Bobby, a Mustang enthusiast, from World Hope Worship Center on Mooresville Road to the cemetery in the Franklin community. Each received a flower before speeding off.

Bobby, 53, was killed Sunday, May 16, in a crash on Interstate 85 in Concord as he and his wife, Karen, returned from a trip to visit family. Just 30 minutes from home, a wrong-way driver struck the driver’s side of the car. A 19-year-old college student, Maija Dionna Sharp, was charged with felony death by vehicle for her role in Bobby’s death.

Bobby’s daughter, Christina Page, said her father’s last days were among his best. Bobby and Karen vacationed with Page, her husband and children in Galveston, Texas. It was Bobby’s first time meeting his newest, 5-month-old grandson in person. There was sightseeing, plenty of beach time and “lots of smiles,” Page said. Her youngest son dipped his toes in the Gulf of Mexico for the first time.

Page learned about her father’s death from her husband on the afternoon of May 16. Half asleep, she sat up and recalled responding, “You’re joking. This is a sick joke.”

Then, she she felt her stomach drop.

“I couldn’t grasp it in my mind, like just the fact of my dad not being there. I couldn’t imagine that,” Page said Friday. “We still have not had the funeral, and I know it’s real, but I don’t want to accept it. It’s hard coming to terms with that.” 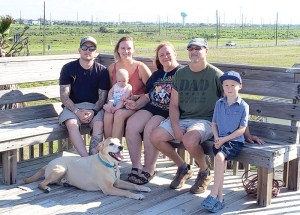 Photo submitted – From left, Timothy Page, wife Christina, Karen Starnes Black and husband Bobby pose for a photo with the Pages’ children and one of the family’s fur babies.

Bobby graduated from East Rowan High School and earned an associate’s degree at Rowan-Cabarrus Community College before working as an electrician and at Daimler Trucks North America’s plant in Cleveland. Family and friends remembered him as smart, good at just about anything he tried and able to strike up a conversation with strangers. While Bobby was a Mustang enthusiast, he was particularly enamored with the Boss 302.

Karen remembers her late husband as “the most handsome man I had ever seen.” He had “beautiful blue eyes” and a winning smile. The pair first met at while working at the truck manufacturing plant in Cleveland and reconnected after Karen was re-hired following a round of layoffs. The pair were married in August 2007.

Karen recently took an early retirement from the Daimler Trucks plant and was dreaming with her husband about the future. She remembers talking about life plans with Bobby on their trip back home.

“I felt like I had everything I could ever dream of,” she said. “Life looked good. I mean really good. I thought we had a long time to go.”

Karen doesn’t remember much about the events immediately before and after the crash. A Charlotte TV news reporter initially said and a state trooper confirmed to Karen her husband likely turned right at the last moment to take the brunt of the impact.

“I don’t think I was asleep, but it was just boom and the car was spinning,” she said.

Chris Richardson developed a lifelong friendship with Bobby after the pair met in kindergarten. They graduated from East Rowan High School together and stayed in touch when Richardson entered the Army and deployed. The pair rekindled their friendship when Richardson moved back to North Carolina for a job with Delta Airlines.

On Saturday, Bobby and Richardson would have been at a car show together, perhaps arguing about what was under the hood of a vehicle, instead of Bobby’s funeral.

“He was just a good person,” Richardson said.