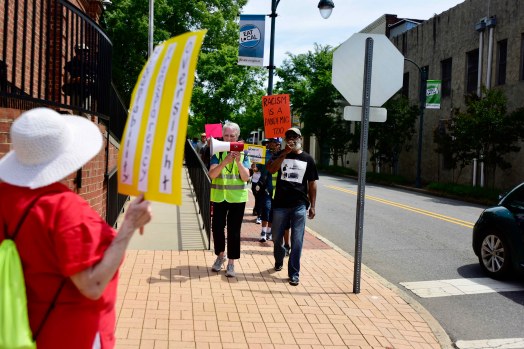 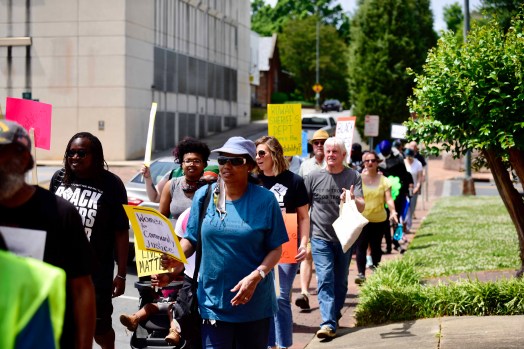 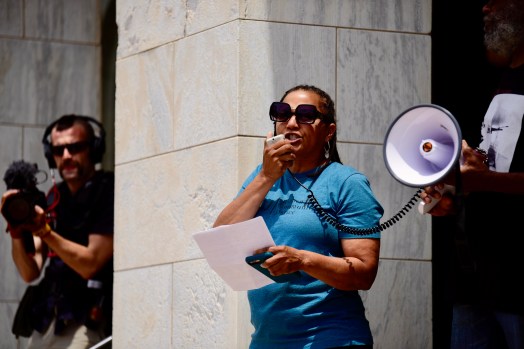 SALISBURY — A crowd of a few dozen demonstrators gathered in front of the Rowan County Sheriff’s Office to make their voices heard on Saturday.

The protest was in direct response to a lawsuit filed by Stephanie Bottom about a 2019 incident that culminated with the 66-year-old Georgia librarian being pulled from her car after a chase involving Salisbury Police and Rowan sheriff’s deputies. The lawsuit alleges excessive force and details injuries Bottom suffered from as a result of the treatment.

The protest was organized by local group Women for Community Justice in conjunction with the Salisbury-Rowan NAACP. Protesters gathered at the Rowan Sheriff’s Office before beginning a loop around downtown with three stops — at the Salisbury Police Department, City Hall and the Rowan County Administration Building. Some passing cars honked or rolled down their windows to show support as the march made its way through town.

At each stop, a statement from Women for Community Justice was read along with featured speakers who addressed the crowd. Demonstrators held signs with statements about the cause. They sang and chanted as they marched, saying phrases such as “Black Lives Matter” and “no justice, no peace.”

The Women for Community Justice statement explicitly says the organization is not anti-law enforcement, but it denounces the treatment of Bottom by the police officers and sheriff’s deputies involved as shown in the video leaked to local media outlets. The groups statement said what’s shown in the video “is not what we expect or will accept from our local law enforcement.”

The statement also decries that officers involved were not reprimanded for their treatment of Bottom.

Calls for action during the protest involved the Salisbury City Council exercising more oversight over the department and the creation of a citizen law enforcement review board.

Speakers were also critical about the lack of transparency regarding the release of body camera footage in North Carolina law. Body cameras have become standard equipment for police in much of the state. Outside of cases where footage is leaked, it is not made public unless there is a court order for a law enforcement agency to do so.

Demands of Women for Community Justice were summarized as accountability, transparency, equity and oversight.

Olen Bruner, former pastor at Trinity Presbyterian Church, spoke to the crowd in front of City Hall. Bruner spoke about reversing how the community interacts with police, changing the idea that calling the police means they are coming to arrest you.

“We can change that phrase, turn it around so when we call the police they’re coming to protect you,” Bruner said. “We’re looking for protection, equal protection under the law.”

Bruner said the system is the true face of inequity.

“That’s why we can’t see the video. That’s why they say they can’t do anything,” Bruner said. “It’s because they’re hiding behind archaic laws.”

Women for Community Justice’s Jackie Miller spoke to the crowd in front of the county administration building. Miller recalled the country’s history of racism, oppression of racial minorities and the slew of killings of unarmed Black people that have received national attention in recent years. Miller also pointed to something other speakers touched on during the demonstration: would Bottom would have been treated differently if she was not Black?

Miller told the Post she thinks the demonstration was a success. The organization was hoping for more turnout, but the message is most important.

“If we don’t do something now to stop it, it’s going to continue,” Miller said. “We can be the example for the rest of the world.”

The demonstration culminated with a poem written and read by 11-year-old London Flowers that asked what people would do if they woke up Black.

“What if you woke up Black and took a stroll to the market,” Flowers read. “Would you feel safe while walking, or more like a walking target?”