Masks on or off? With state mask mandate lifted, many local businesses have adjusted in kind 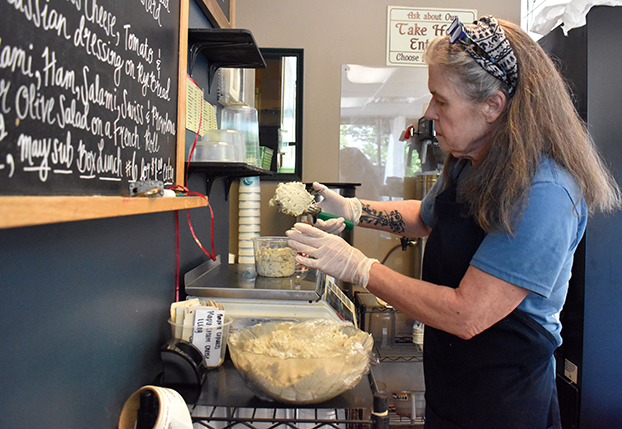 SALISBURY — While closing up shop a week ago Saturday, Laura Murph took down a sign that had been hanging up on her restaurant’s front door for months.

Like at other restaurants, shops and gyms around Rowan County and across the state, the sign informed customers entering that a mask was needed.

After Gov. Roy Cooper on May 14 lifted the state’s mask mandate and other COVID-19 restrictions, Murph decided to take down the sign from L.A. Murph’s Fine Cooking, her cafe and bakery located at 1532 W. Innes St.

Deciding to allow customers to enter her restaurant maskless, she said, wasn’t such a difficult decision.

“As far as the customers go, it was an easy decision,” Murph said. “I’ve always felt it should be left up to the individual, although I’ve never expressed that opinion.”

As for employees and whether they should wear masks or not took a bit more pondering.

“I wavered over the decision all weekend and decided my employees are not going to be wearing masks,” Murph said. “I know that we have a lot of, it seems, more elderly customers that tend to be still in fear of the pandemic and I just don’t want to lose my customers. Not as much as I don’t want to lose their sales, but we developed such an attachment.”

Concerns about alienating the rest of her customer base eventually led her to not enforce a mask mandate for employees. However, employees and customers are still more than welcome to wear masks in her restaurant, Murph said, and some still have.

Without a governing body requiring businesses and customers to wear masks, the decision on whether or not customers and employees are allowed to go without a face covering now rests squarely on the shoulders of individual business owners. 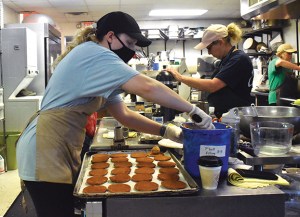 Like L.A. Murph’s, neither Go Burrito in downtown Salisbury or Water’s Edge at High Rock Lake are requiring diners, servers or kitchen staff to wear masks. Mikey Wetzel, the owner of go Burrito and co-owner of Water’s Edge, said the decision was “100% easy” once Cooper lifted the mandate.

“When they made the announcement, my interpretation was that they’ve been playing it cautious all along, so it’s very safe to let go of the mask requirement,” Wetzel said.

Wetzel said he feels comfortable not requiring employees to wear masks because most of them have already been vaccinated. Included in group three of the state’s vaccine rollout plan, food service workers were eligible for the vaccine in North Carolina starting on March 3.

Wetzel realizes that not asking people to wear masks in his restaurant means that a few unmasked, unvaccinated customers may come through the doors. But there’s simply no way to police it, Wetzel said.

“There’s really nothing we can or want to do, other than the honor system,” Wetzel said. “If you are showing up without a mask, I guess you are advertising to society that you are safe.”

The lifting of the mask mandate came as a relief to Matt Marsh, the co-owner of The Forum fitness center. The Forum is no longer requiring customers or employees to wear masks in the facility.

“I definitely think that there’s a sense of relief (among members) that they don’t have to wear masks,” Marsh said.

Marsh said he’s still seen several gym members wear a mask, but the majority have elected to go without them while working out.

Justin Wells, who owns Fuller’s Market in downtown Salisbury, has found it difficult during the pandemic to turn away customers entering his store maskless. With Cooper’s order no longer in effect, Wells no longer has to worry about enforcing the mandate.

Wells and his wife are currently the store’s only two employees and they’ve stopped wearing masks as well.

“At the end of the day, you have to make your own decision for you and your employees, whether it’s just you and your wife like us, or whether you have people,” Wells said. “It may vary from place to place, but for us, you just don’t want to run somebody out.”

The day after the mask mandate was lifted, Wells estimated that 80% of customers came in without a mask. Before then, he said about 50% of customers were going maskless.

The Kannapolis Cannon Ballers, following guidance from the CDC and Major League Baseball, are now also allowing fully vaccinated fans to go maskless in the ballpark, but are still strongly encouraging unvaccinated fans or those who feel uncomfortable in a non-socially distanced setting to wear a mask.

While many local businesses were quick to adjust their policies regarding masks, some of the national companies operating in Rowan County have been slower to react.

“Small businesses can turn on a dime and make their own decisions. As soon as the governor announced his lifting of the gathering restrictions on Friday afternoon and said it’s effective immediately, that’s the beauty of a small business that you can change it pretty quickly,” said Elaine Spalding, president of the Rowan County Chamber of Commerce.

Making a decision on masks could prove more difficult for larger businesses, she said.

“When you have a larger business, they need time to go through and make all of their policy decisions and check with their legal departments and HR departments and do all of that before they can announce anything,” Spalding said.

Harris Teeter late last week announced that it would no longer require customers or employees to wear masks. Food Lion is encouraging customers to wear masks and is still requiring workers to do the same. Other big box retailers like Walmart have since dropped their mask policies, while some still have them in place.

“I think you’re going to see a number of businesses that will keep the current policies in place until they have a chance to transition,” Spalding said. “They want to make sure all of their employees are staying safe and all of their customers staying safe. I think we’ll see that transition over the next few weeks.”

F&M Bank, which operates 12 branches across several counties, decided earlier last week to drop its mask policies and roll back some of its other COVID-19 protocols.

The bank was a little slower to make an adjustment, President and CEO Steve Fisher said, because it wasn’t expecting Cooper’s announcement.

“Like everyone else, we were a little surprised and caught off guard,” Fisher said. “You phase into these protocols and I think everybody expected we would phase out of these protocols and it literally almost dropped without notice overnight and so I think that caused a lot of businesses a little head scratching, if you will.”

Fisher said the bank pulled staff from various departments together on Monday and examined its COVID-19 protocols. The ultimate decision was to let go of its mask requirement for both employees and customers. Like Murph, Fisher said the more laborious decision was whether to require employees to continue to wear face coverings.

Since then, Fisher said a “vast majority” of F&M’s customers and employees have stopped wearing them.

Fisher said he can understand why the decision may be difficult for larger, national companies.

“A company our size, we can pivot in a few days, but when you’re talking about a company like Target or Costco or Bank of America, they can’t do that overnight and they’re making multiple decisions in 50 different states,” Fisher said. “This is just one of their markets. As consumers, quite frankly, we need to be patient with them.”

Fisher noted that F&M Bank is still requiring its courier service, which delivers materials across branches daily, to wear masks and adhere to social distancing because they “touch each one of our branches everyday.”