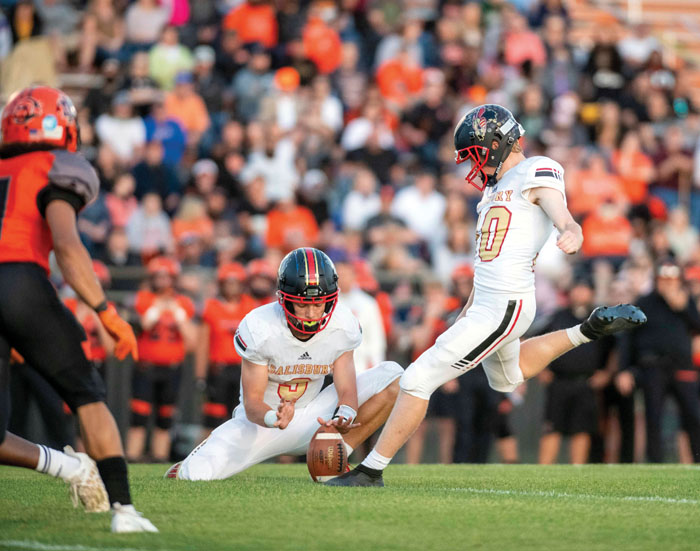 SALISBURY — Wade Robins became as famous as it’s possible for a kicker to be during Salisbury’s run to the 2AA state football championship.

The Post’s Special Teams Player of the Year, Robins made two of the kicks of the century, converting the decisive field goal in the brutal 10-7 defensive battle with Burns in the third round and booting another one to topple nemesis North Davidson 24-21 in the regional final.

Robins has been one of the county’s busier athletes this spring — jumping around from soccer to football to golf to baseball.

“We had Wade for only four or five football practices,” Hinson said. “So we got a heck of a return on our investment.”

Robins kicked 49 PATs, including 6-for-6 in the state championship game, and put a decent percentage of his kickoffs in the end zone. And if he made you start on the 20, going 80 yards against Salisbury’s defense was a hopeless assignment.

Still, he’ll be remembered for those clutch field goals that he executed with the help of his blockers, long snapper Jackson Murphy and holder Vance Honeycutt.

“That kick at Burns, 39 yards, 3.5 seconds on the clock, kicking from the left hash, I don’t think there are a lot of high school kids who could have made that one,” Hinson said.

He’d missed one earlier at Burns, although Hinson is convinced after watching the film that what was ruled a miss might have been good.

In the North Davidson game, Robins made the PAT with 6:59 left for a 21-all tie. Then he kicked the game-winning field goal with 1:09 left.

“Not as long as the one at Burns, but a sharper angle,” Hinson said. “Wade’s improvement from 2019 was fantastic. He made two pressure-packed kicks.”