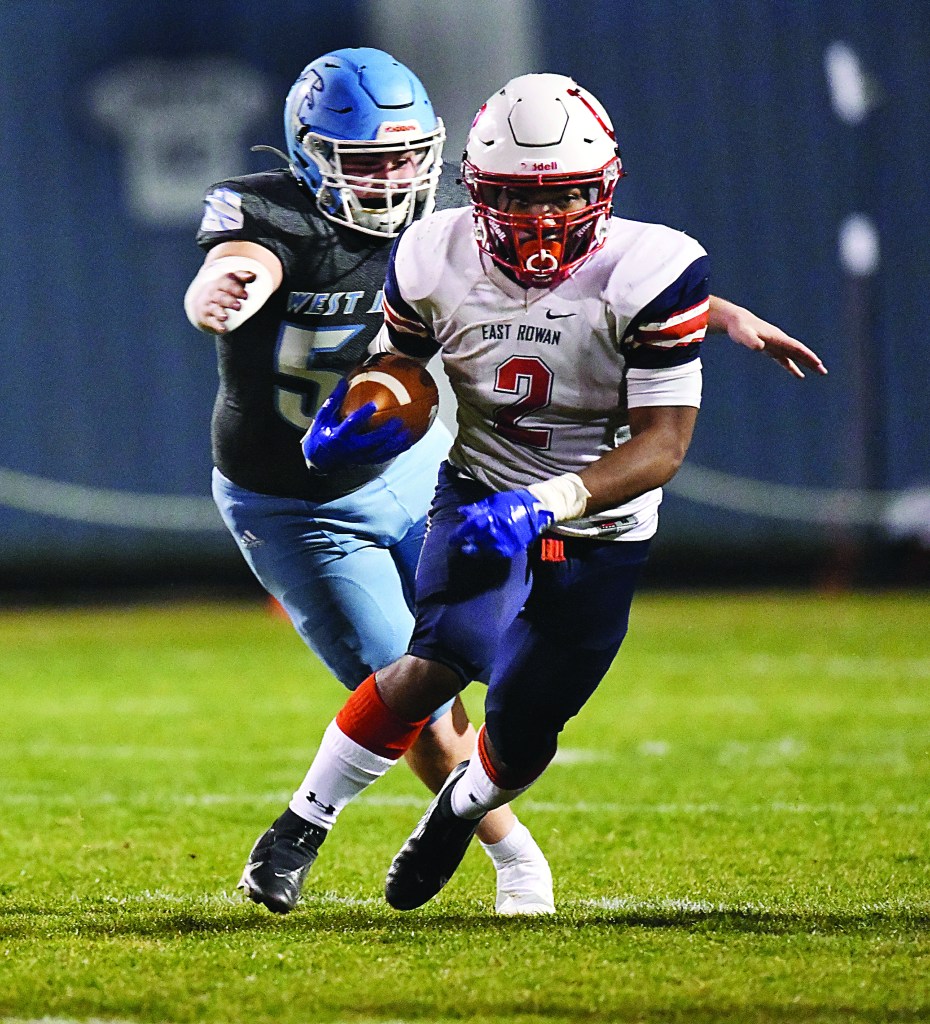 GRANITE QUARRY— East Rowan senior running back Sammy Pinckney capped his high school career with one of the extraordinary games in county football history — 35 carries for 393 yards and six touchdowns in a 51-23 win at North Iredell.

The 393 yards broke school and county records for rushing yards in a game, while the six TDs broke the school record and tied the county record.

“This may sound strange, but it was a quiet 393,” East head coach John Fitz said. “I knew Sammy had a bunch of yards, but I had no idea it was anything like 393. I was shocked when I heard that because he didn’t have as many long ones as he does some nights. The guy on the PA at North Iredell was like Vin Scully and was keeping everyone informed.”

Pinckney shares Rowan County Offensive Player of the Year honors with Salisbury quarterback Vance Honeycutt. He’s only the second East offensive honoree in this century. The other was quarterback Samuel Wyrick in 2014.

But don’t expect Pinckney to be boasting about it.

“He’s a very humble kid,” Fitz said. “He’s not one of those kids who walks around telling everybody he’s the greatest ever. He’s always quick to give others credit. That’s one of the best things about him.”

Fitz said his only regret was that the Mustangs didn’t throw it to Pinckney more. He’s a capable receiver.

Besides the monster game against North Iredell, Pinckney turned in huge outings against county rivals Carson and West Rowan. He didn’t have any bad games. He scored at least one TD in every game for a 2-5 East squad and always had at least 125 rushing yards.

“He’s a very determined runner who is like a smaller version of Earl Campbell,” Fitz said. “He’s almost impossible to bring down, always spinning and fighting for that extra yard.”

The COVID-shortened season cost Pinckney a 5,000-yard career, but he did finish it as the No. 3 rusher in county history with 4,878 yards. He trails only West Rowan’s KP Parks and Carson’s Shaun Warren on the county’s all-time list.

“A short season, but we were grateful for the seven games we got to play,” Fitz said. “It could have been a lot worse. I’ve got a buddy in California and they only got to play three games, with no state championships,”

Pinckney (5-7, 185) also competed for East in basketball and he’s currently one of the key members of Fitz’s track and field team.

“I can’t say enough good things about him,” Fitz said. “He’s pretty good in those other sports. He’s one of those guys who has always done everything he can to help East Rowan athletics.”

Pinckney’s college destination hasn’t been determined yet, although there’s been significant interest from schools such as South Carolina State, Jackson State and Hampton.