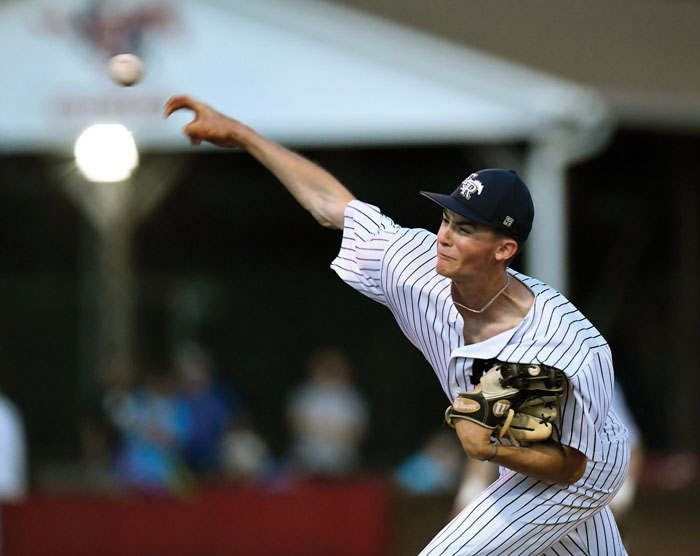 Chance Mako will give East Rowan a strong 1-2 punch on the mound with teammate Cameron Padgett. File photo by Wayne Hinshaw, for the Salisbury Post

On Friday, Carson (6-2, 5-1) won 7-5 against a fifth-place North Iredell team that is dangerous and good enough to upset one of the frontrunners.

Had Driver, a Catawba signee, thrown two more pitches, he would haven’t been able to pitch again for three days. He only has to take two days off after 59 pitches per the NCHSAA pitch-count rules, so he’ll be eligible to pitch Monday when East Rowan (6-2, 4-2) visits Carson for a critical matchup.  Carson won the first meeting of the teams, 6-3, with Driver’s pitching being a key factor in the game.

Carson only got six hits against North Iredell, but one of them was a two-run double by Caden Hudson in the fourth that extended the Cougars’ lead to 7-1.

After that, Carson hung on. Mason Duren pitched four innings of relief. North Iredell brought the tying run to the plate in the seventh.

Only the NPC champion is guaranteed to make the playoffs.

West Rowan (5-3, 4-2) has been chasing the pack since early losses to East Rowan and South Iredell, but the Falcons got back in the race with Friday’s exciting 7-4 win over East Rowan at Staton Field.

Steven Smith’s three-run homer off Jake Hunter in the first inning got the Falcons off to a quick start. Casey Gouge (3-1) pitched into the sixth inning and Smith took the mound to save it.

Cameron Padgett had three of East’s 10 hits. JT Fecteau had two hits for West, including a triple.

West faces another critical game on Monday when it goes to South Iredell. Gouge won’t be able to throw, but Smith will be eligible to pitch, and West also will have Jake Blevins available.

Hunter won’t be able to pitch Monday for East, but Padgett and Chance Mako, who threw 39 pitches in relief on Friday, will be available.

In Central Carolina Conference action on Friday, Salisbury’s Max Crawford struck out 13 Lexington Yellow Jackets in a five-inning game and tossed a no-hitter.

Vance Honeycutt had three hits, including a triple and his second homer.

Haiden Leffew and Luke Hiskey pitched for the Raiders.

Wesley Stewart homered for the Black Knights, while Merritt Beeker, who is headed to East Carolina, struck out 11 and walked six.

South should get a win Tuesday against Thomasville and has a big road game Thursday at Ledford.

The top three from the CCC make the state playoffs, and North Davidson and Oak Grove are still unbeaten in the league. The South-Ledford game will go a long way toward deciding that third spot.

Northwest Cabarrus (6-2, 6-1) is the frontrunner in the South Piedmont Conference.

The Trojans beat A.L. Brown 5-2 on Friday behind the pitching of Michael Specht, who struck out 10.

Caden Grider had two hits for Northwest. Nate Baucom had two for the Wonders (3-5, 3-4).